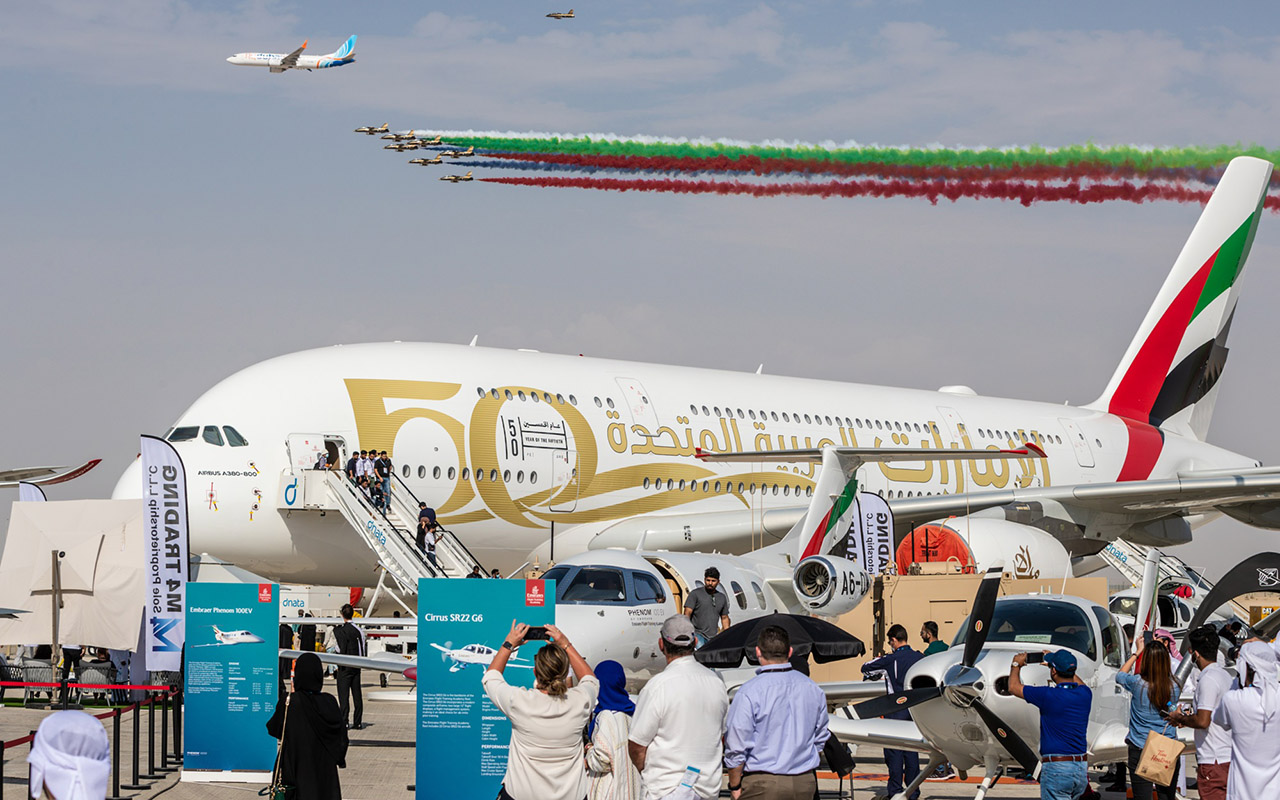 Dubai Airshow 2021, the largest since its launch in 1989, revealed that offers worth more than 287 billion dirhams ($ 78 billion), while the exhibition received more than 104,000 visitors during the week it was held, with an increase of about 50% of visitors for business purposes .

Thus, the exhibition has strengthened its position as one of the most important international platforms accelerating the recovery process for the aerospace sector after the Covid 19 crisis, especially in light of the participation of a group of the most prominent executives and leaders of participating sectors, representing 148 countries. , which represents an important achievement for the defense and space sectors, which witnessed the announcement of a group of deals and agreements.

Airbus announced that they received 408 aircraft orders (269 confirmed orders and 139 initial orders) during the Dubai Airshow. During an earlier event at the fair, Airbus released its latest report on the global market outlook, which showed the change in demand in the air transport sector from expanding the fleet to accelerating the retirement of old and less fuel-efficient aircraft, leading to the need for approximately 39,000 new aircraft. transport passengers and goods, of which 15,250 are alternative aircraft with a 40% return.

During the exhibition, the United Arab Emirates’ Minister of Defense signed contracts worth 22.5 billion dirhams with companies and providers of air services from Europe, America and Asia. On the opening day, the UAE Air Force and Air Force awarded an 11 billion dirham contract to JAL, a subsidiary of the Edge Group, the advanced technology group in Abu Dhabi, to perform maintenance, repair and overhaul and provide specialized support services for the United Arab Emirates Air Force and Air Force.

Tawazun’s Economic Council signed a memorandum of understanding with European Airbus to discuss opportunities to establish facilities in Abu Dhabi, as part of Tawazun’s ongoing efforts to strengthen long-term partnerships with global giants in the defense, aerospace and aerospace sectors. Tawazun announced an agreement to purchase 100 multi-use 500VRT helicopters from Aerotour, worth € 216.9 million.

The exhibition signed a Memorandum of Understanding with the Emirates Space Agency on the second day, according to which the two parties will work together to strengthen the exhibition’s position as an important destination for companies and investors in the space sector.

Timothy Howes, CEO of Tarsus Middle East, organizer of the Dubai Airshow 2021, said: The exhibition achieved exceptional levels in terms of offerings, attendance and exhibitors, to reflect the elements of flexibility, strength and adaptation that characterize the aerospace sectors, which helped them to overcome the covid-19 crisis. In this year’s edition, we witnessed a major transformation driven by innovation, technological progress and digital transformation, especially with many exhibitors offering their brand new solutions in these areas. The exhibition testified to a broader interest from the participants in sustainability and reduction of carbon dioxide emissions, which are core issues around the world. We also saw an unsurpassed increase in the number of prominent managers who came to the exhibition from different sectors.

Hawes continued: “We thank the wise leadership for their continued support, trust and guidance, which resulted in the largest exhibition of its kind in the world being held this year. With the value of business exceeding $ 78 billion, we can expect great prosperity in the future of the aerospace sector, based on cooperation, partnership and work. The exhibition has become a world-class platform for shaping the future of the space sector.