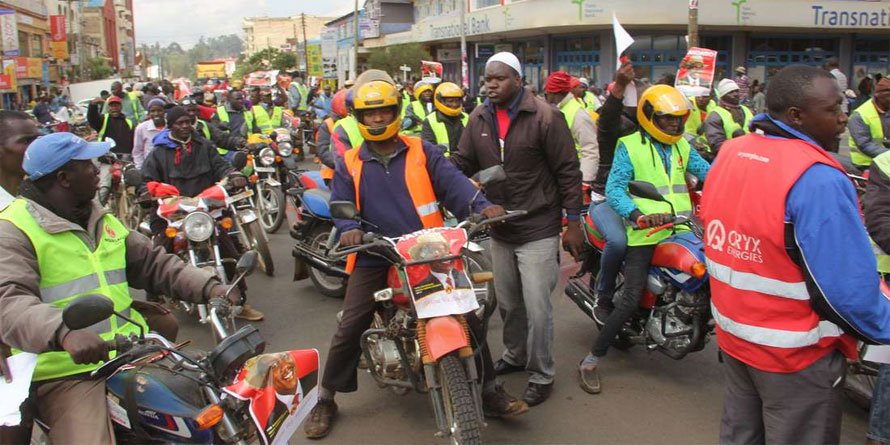 The boda boda sector provides one million direct jobs for riders earning Sh1 billion daily, says a new study, underlining the importance the motorcycle business to Kenya’s economy amid a countrywide crackdown on the operators over indiscipline.

A study of the sector by listed firm Car & General (C&G) #ticker: CGEN – which sells motorcycles, their spare parts and other engineering equipment – shows that it also supports six million livelihoods indirectly, about 10 percent of the country’s population .

C&G estimates that each rider makes an average of Sh1,000 per day from an average of 15 rides, translating to a daily income of Sh1 billion or Sh365 billion annually for the one million of them.

This is equivalent to 3.4 percent of GDP and almost matches the output of Kenya’s education sector, whose contribution to GDP stands at 3.8 percent.

The Treasury is also raking in about Sh60 billion annually in fuel taxes from boda bodas, which consumes an average of Sh300 worth of petrol each in a day.

This translates to Sh300 million worth of fuel each day, out of which about Sh163 million goes to the government in form of taxes, levies and other charges.

“There are 1.2 million riders in Kenya. Nine out of 10 are used for commercial purposes, representing over one million jobs created. Seventy-five percent are youth and six percent are female, ”says the C&G report.

The motorcycle business was put in the spotlight this week after some riders assaulted a female motorist on Nairobi’s Wangari Maathai Road (formerly Forest Road), sparking widespread condemnation of the so-called boda boda menace.

A widely circulated video of the incident shows the woman screaming for help as she was stripped of her clothes and groped. There have been arrests, condemnation and calls for tighter regulation of the boda boda sector.

President Uhuru Kenyatta on Tuesday ordered a crackdown on all boda boda operators countrywide. The operators were given 60 days to obtain smart licenses and join registered saccos, which will in turn be required to maintain a digital register of their members for easier identification.

Experts back calls for enhanced regulation of boda bodas, arguing that the sector has become too important economically to be left in the hands of unruly operators.

“Because of this behavior by the boda boda guys, there is a good reason to come up with some regulation, not necessarily using the police but rather one based on economic fundamentals so that we can make the sector more competitive, efficient and fit for purpose , ”Said Prof XN Iraki, an economist at the University of Nairobi.

“There are two approaches to use. First is self-regulation by the operators themselves and the other is normal government oversight, both avoiding stifling the sector. ”

The push for tighter regulation has come amid rapid growth in motorcycle registrations and their increased use in public transport.

Official data shows annual registrations have doubled over the past five years to stand at 252,601 compared to 123,539 new listings in 2016.

Motorcycles are fairly affordable, retailing at between Sh65,000 and Sh130,00, enabling many youth to acquire them for business.

Increased demand for bikes has also attracted several companies that have set up assembly plants in Nairobi and Mombasa for imported completely-knocked-down units.

Besides the popular TVS, other models on Kenyan roads are Japan’s Honda, Indian firm Bajaj’s brands such as Boxer, Toyota Kenya’s Yamaha as well as a myriad of low-cost Chinese brands.

Motorcycle taxi companies like Bolt are expanding in Kenya with backing from investors betting that the meteoric rise of two-wheeled taxi firms in Asia can be replicated in some of the fastest-growing economies in the world.

The idea of ​​booking a motorbike taxi through a company that has trained drivers and provides passengers with a helmet appeals to some commuters in Kenya’s towns, especially Nairobi.

Kenya, like most African countries, offers a huge potential for motorcycle ride-hailing firms due to low personal car ownership, rapidly expanding populations and a lack of efficient mass transport systems in fast-growing cities.

While informal motorcycle taxis have been around for years, the new companies are hoping to win a market share by offering trained, accountable drivers and the convenience of booking rides through a mobile app.

According to Prof Iraki, the sector is now ripe for formalization due to the big multiplier effect that it carries in job creation.

“We need to expand the thinking around boda bodas where, for instance, investment in assembly would have massive effect on the manufacturing sector. We ought to be looking at upgrading riders’ skills, manufacturing bikes and making spare parts and so on, ”he said.