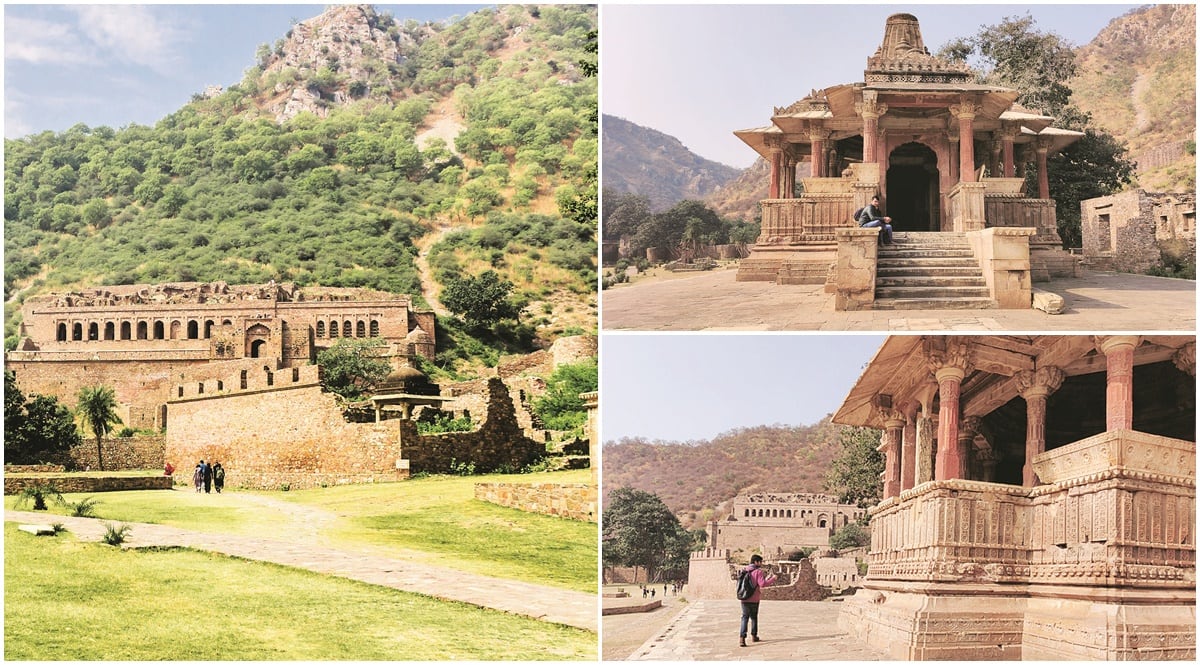 They serve as important story tellers of history, besides offering the mystery factor

Bhangarh Fort never fails to mesmerise visitors. As you enter the 16th-century fort — located in Alwar, Rajasthan — an eerie silence fills the air. Curiously, you advance your steps, only to uncover the legends and mysteries of the ancient monument that has been labeled by many people as one of the most haunted places of India.

A Hanuman temple erected alongside a peepal tree on the right side of the gate first welcomes you. With divine blessings, you proceed towards a tryst with the ‘ghosts of the past’. The once bustling narrow lane of Jauhari Bazaar has now fallen to sleep while the structures remain intact as if waiting for its masters to return. Small, identical shops lead to the Nachan Ki Haveli (dancer’s palace), the Gopinath temple, Someshwara temple and the ruins of the grand royal palace.

A step into the fort takes you 400 years back in time. Like a sad story, the ruins of Bhangarh welcome you, singing a faint elegiac song. A large army of monkeys and langurs remains the only inhabitants of the dead fort. Every now and then, a flock of pigeons forms a cloud above the monument, flying high and revelling in the numbing silence. A bird’s-eye view of the entire Alwar town from above the palace laments its emptiness. Such is the aura of Bhangarh.

Bhangarh Fort is said to have been built in the 16th century by Raja Bhagwant Das, a Kachhwaha ruler of Amber, for his younger son Madho Singh. The fort is located on the border of Sariska Reserve in the Aravali range of hills of Alwar district in Rajasthan. As history’s pages have turned and historical places aged, mystery and local legends have come together to earn Bhangarh Fort the moniker of one of the most haunted places of India. Over 400 years hence, the shattered walls of the fort stand testimony to this claim.

Locals share several legends on how the fort became ‘haunted’. According to a popular legend, it was due to the curse of Baba Bala Nath, who had permitted the construction of the town provided it did not cast a shadow over his abode. Initially, only four floors were hence built. But when construction was expanded to seven floors, it cast its shadow on Baba’s retreat and the town was ‘destroyed’. Another tale refers to the story of princess Ratnavati who refused a wizard’s advances and the latter, in turn, cursed the town.

Anuradha Goyal, columnist and author of books Lotus in the Stone: Sacred Journeys in Eternal India (2020) and The Mouse Charmers: Digital Pioneers of India (2014), explains, “Monuments and historical sites that have seen violence and whose stories are lost to us, especially the reasons why they were abandoned all of a sudden, usually create an aura of mystery around them. Over time, layers keep getting added to the story and the monument keeps shedding itself into ruins, adding weight to the tale and earning it a reputation of being haunted. Having said that, such places do carry restless energy within their abandoned ruins. ”

In fact, far from being haunted, the monument comes across as unsafe to be in after sunset. The debris of the shattered walls, the overgrown grasses, the hills behind the fort, the sheer darkness in and around the fort and a lack of security guards inside the complex make visitors vulnerable to the dangers of being lost in the vicinity in the dark or to criminal activities.

A senior archaeologist from the office of the Archaeological Survey of India (ASI) Jaipur circle, however, rubbishes the ‘rumors’.

“There is nothing mysterious about closing down the monument after sunset. All over India, monuments under the ASI are open only from sunrise to sunset. It is the way the locals interpret it. Practically, we do not believe in any rumors and deny any such beliefs, ”the archaeologist adds.

The ASI had declared the Bhangarh temple as a protected monument in 1951 and is responsible for its upkeep and maintenance.

The ruins are now gradually being restored as per the availability of funds and needs of the monument. “We are regularly restoring and maintaining the monument. The conservation process is on, though not heavily but slowly and steadily. We have so far restored the bazaar area, removed the debris and worked on the haveli too, ”the ASI official adds.

Scary tales
Just like Bhangarh Fort, there are several places around the globe that have attracted the tag of being haunted. Yet, they remain popular tourist destinations. The Paris Catacombs in France, for instance, were opened to the public in 1809. The ossuary came into being in the late 18th century and has more than six million skeletal remains of the dead that were transferred to the area after the city’s cemeteries got exhausted . The place is now a tourist spot with guided tours available for the area.

Several other catacombs around the world have opened to the public to serve as tourist spots. The Sedlec Ossuary in Czech Republic, too, boasts skeletal remains of 70,000 people that have been used to decorate the interiors. The bone church is one of the most visited spots of the place. The Capuchin Catacomb of Italy is also said to hold mummies of more than 2,000 people.

Disneyland cashes heavily on its tours of the Haunted Mansion in Southern California in the US. To immerse in the experience, visitors sit in a gloomy Doom Buggy for a tour of the mansion. Another location with a spooky and a real story to visit is the small Island of Dolls in Mexico, where decaying dolls hang from trees, painting a picture straight from a haunted movie.

Various travel planners like Trip Advisor and Airbnb offer tours to the ‘dead island’ that is believed to have been haunted by the spirit of a young girl. The caretaker, Don Julian Santana, is said to have hung the dolls from the tree to keep her spirit away. Another doll town called Nagoro in Japan is a famous tourist attraction known for many realistic dolls positioned throughout the village.

In many cases, places of historical importance that have gained the reputation of being haunted have been opened to the public as they serve as important story tellers of history, besides offering the mystery factor, which enthralls visitors. Poveglia Island in Venice is one such place that has been opened for visitors and guided tours. The island had served as the quarantine station for those suffering from the Bubonic Plague in the 20th century and as a mental asylum in the 1920s.

ENTER AT YOUR OWN RISK

Indian monuments and sites that are said to be haunted

Dumas Beach: The beach located in Surat is said to be one of the most haunted places in India. According to folklore, it was a Hindu burial site

Brij Raj Bhavan Palace: Located in Kota, Rajasthan, the palace was built in 1830 to serve as the residence of British officials. Presence of the ‘ghost’ of a British officer killed in 1857 is said to haunt the palace

Kuldhara Village: The abandoned village in Jaisalmer, Rajasthan was established around the 13th century. Once a
prosperous village, it was abandoned in the 19th century for unknown reasons

D’Souza Chawl: The chawl in Mahim is said to be haunted by the ‘ghost’ of a woman

Agrasen ki Bauli: The ASI-protected monument is an ancient stepwell in Delhi that is believed to have been rebuilt in the 14th century

The Barog Tunnel: Situated in Solan, Himachal Pradesh, Tunnel number 33 is said to be haunted by the ‘ghost’ of Colonel Barog

Malcha Mahal: The 14th-century Tughlaq-era hunting lodge is in Delhi. It is also called Wilayat Mahal

South Park Street Cemetery: Located on Park Street or Mother Teresa Sarani in Kolkata, it was established in 1767. It is an ASI-protected cemetery with gothic and Indo-Saracenic-style tombs