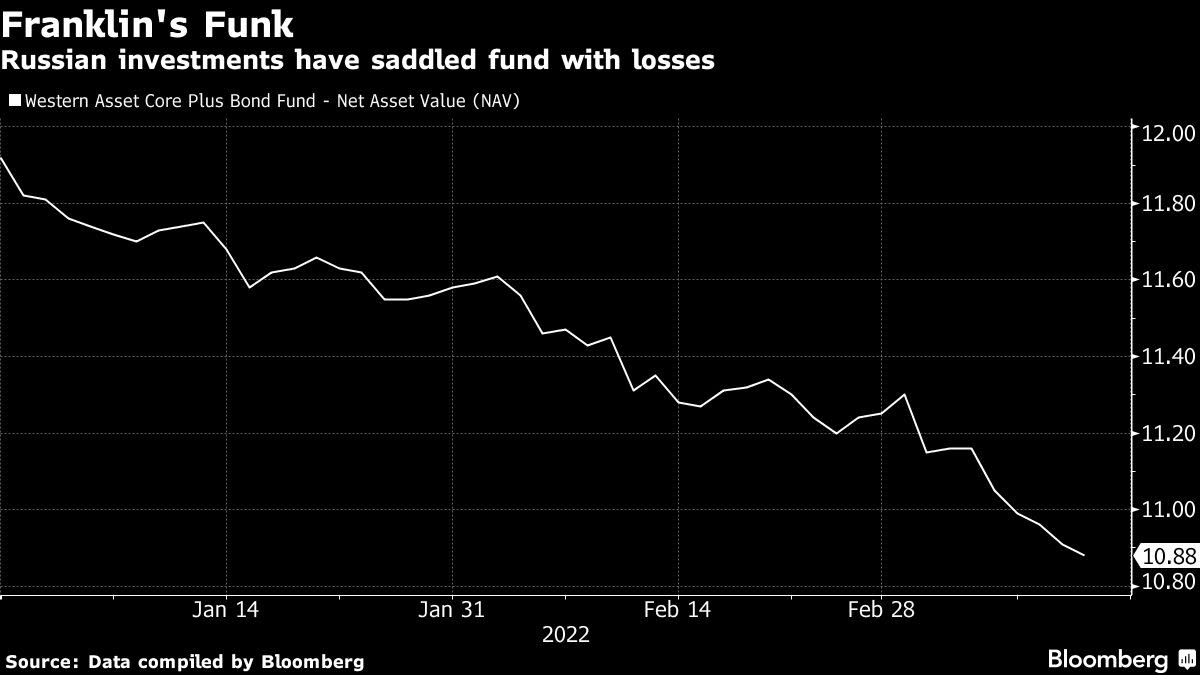 (Bloomberg) – As Wall Street starts to tally the market damage triggered by Russia’s invasion of Ukraine, a big bond fund run by Franklin Resources Inc. is emerging as an early loser.

The Western Asset Core Plus Bond Fund, with $ 37 billion of US mutual fund assets, declined more than 8% this year and about 3% since the conflict began. The losses, spurred by investments in Russian securities, have given the fund an unwanted distinction: It’s one of the worst-performing funds in the category, according to Morningstar Inc.

Heading into this year, the US fund had $ 484 million in Russia bonds, representing 1.2% of its total assets. Those positions were marked down by more than half to $ 194 million as of Feb. 28, according to the firm. The positions may have declined further after additional sanctions and restrictions placed on Russia.

The fund has trailed its benchmark index by more than 3 percentage points this year, according to data compiled by Bloomberg.

Western Asset Core Plus has underperformed largely because of its higher allocation to emerging markets, including Russian local debt and the Russian ruble, and “its much longer duration” as rates rose in early 2022, Morningstar analyst Mike Mulach said in an email.

A spokeswoman for San Mateo, California-based Franklin declined to comment.

The fund’s decline shows how the invasion continues to ripple across financial markets, with some of the biggest money managers halting trading in exchange-traded funds and index providers excluding Russian securities from benchmarks used by investors worldwide.

Many money managers were blindsided by Russia’s invasion of Ukraine last month, leading to sharp losses at several hedge funds and other asset management firms. The war has left several Russian assets untradeable and also sparked volatility in the rates market. US and European bond yields fell sharply on demand for safe-haven assets.