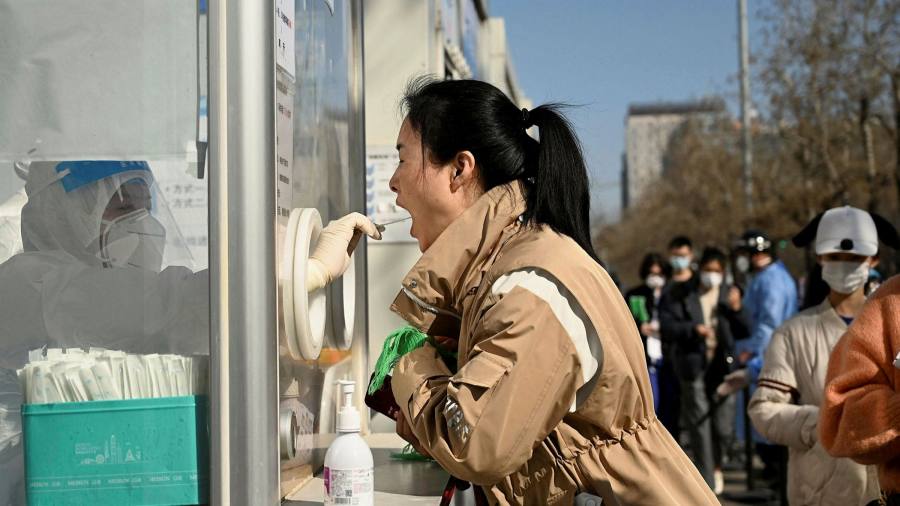 China is battling its biggest Covid surge since the start of the pandemic and has locked down multiple cities including Shenzhen, its technology hub, in a move that threatens already brittle global supply chains.

Apple supplier Foxconn and dozens of other factories in Shenzhen have stopped production after authorities imposed a lockdown on the city of 17.5mn.

Factories in the tech and manufacturing hub that borders Hong Kong have been ordered to close, residents have been told to stay home and public transport and restaurants shut down after China reported more than 5,000 locally transmitted coronavirus cases across the country at the weekend.

Rapidly rising case counts were reported in the north-eastern province of Jilin, as well as in Shanghai, where some neighborhoods have been put into lockdown, and many other cities around the country.

Authorities in Jilin are rushing to build four new hospital and quarantine facilities with 16,000 beds to separate those infected with coronavirus and their close contacts from the rest of the population. The construction has revived memories of similar steps taken at the start of the pandemic in Wuhan in 2020, and a live webcam is streaming progress online.

The lockdown in Shenzhen is scheduled to last for six days and could compound disruptions to global supply chains that have contributed to rising inflation in the US and Europe.

More than 30 Taiwanese companies, making everything from circuit boards to touchscreen modules, announced production stoppages at their factories in the city. Most of the manufacturers said the plants would be shut until March 20 pending further announcements by local authorities.

Foxconn said it had adjusted production at other plants to “minimize the potential impact”.

Chinese markets fell on Monday, with the Hang Seng Tech index of large technology stocks down more than 7 per cent, the broader Hang Seng index almost 4 per cent lower and China’s CSI 300 index dropping more than 2 per cent.

Two workers from Foxconn’s Longhua and Guanlan Technology Parks said they were given three days off with the possibility that this would be extended to March 20. Workers were banned from leaving the massive industrial parks that combine dormitories and production facilities, according to an internal notice seen by the Financial Times.

The two Shenzhen plants are big production hubs for Apple’s iPhones and workers said they had been assembling the latest iPhone 13.

The worsening outbreak is testing President Xi Jinping’s zero-covid strategy, which has required citywide lockdowns, mass testing and meticulous contact tracing whenever an infection is detected.

“The Covid situation in China has deteriorated at an alarming pace over the past week,” said Ting Lu, chief China economist at Nomura. “With the much worsening pandemic and Beijing’s resolution in maintaining its [zero-Covid strategy]”We believe China’s around 5.5 per cent ‘GDP growth target this year is becoming increasingly unrealistic.’

Christian Gassner, head of a Shenzhen-based furniture manufacturer, said the shutdown was causing havoc, but he was hopeful it would only last a few weeks.

“Companies in Shenzhen. . . need to stop operations, the companies can not operate and suppliers in Dongguan can not deliver, ”he said, referring to a nearby manufacturing hub.

The exact cause of the China outbreaks is unknown but some have blamed Hong Kong, which is struggling to deal with a surge of cases that has overwhelmed hospitals and morgues.

Health authorities were forced to apologize on Friday after the bodies of Covid victims were stored next to living patients in the city’s hospitals.

China’s top coronavirus expert Zhang Wenhong warned that the Omicron subvariant known as BA.2 that is sweeping through Hong Kong was now on the mainland and the country’s healthcare system would buckle if borders were fully opened up.

“No matter how fast Omicron BA.2 is, it will still slow down with the pace of life. If we slow down, the virus can not travel fast, ”he said in a social media post.