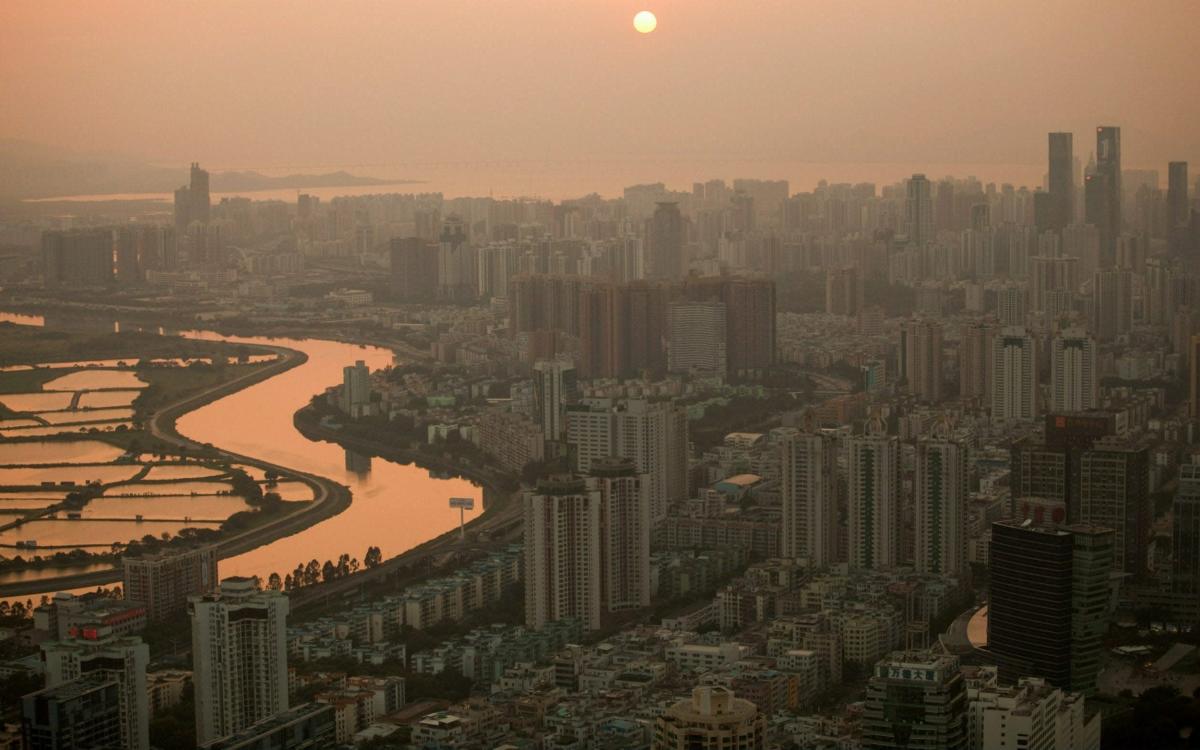 Bert Colijn, from Dutch bank ING, has one way of looking at Europe’s soaring petrol prices (I think this is a ‘laugh-or-you’ll-cry moment):

If you’re just joining us, here are some of the business news stories you should be reading:

Bloomberg’s Joe Weisenthal has a chart that puts Tencent’s slump today in perspective: shares are the lowest since March 2020, amid a combination of risk-off sentiment towards China and reports the company faces a fine over anti-money laundering failings.

European gas prices have fallen sharply today amid growing hopes that talks over stopping the war in Ukraine may actually get somewhere.

Here’s a chart of the Dutch gas futures benchmark, which has fallen as much as 16pc today.

It’s a similar story in the UK, where gas futures have fallen as much as 12.1pc this morning.

Tesla boss Elon Musk, the world’s richest man, has said this morning that he does not plan to sell his crypto holdings, so that’s that.

Boris Johnson is trying to convince Saudi Arabia to raise its oil output, health secretary Sajid Javid has said in an interview this morning.

The Prime Minister is reportedly traveling to meet with Saudi officials this week – although Downing Street has so far declined to confirm plans.

At a time of a major global energy crisis that has been caused by this war in Europe, it is right for the prime minister and other world leaders to engage with Saudi Arabia and try to work together where that makes sense.

Pressed on whether it is right to seek to do more business with Saudi Arabia – which executed 81 men just days ago – the health secretary said: it is “important to recognize, whether we like it or not, that Saudi Arabia is one of the world’s largest oil producers ”.

The lockdown of Shenzhen is a big deal: the city is a major producer of electronic and automotive components, so prolonged disruption could mean a fresh wave of disruptions to global supply.

It’s the country’s largest lockdown since Wuhan, in the early days of the pandemic.

In the past hour, Beijing has also announced a lockdown across Jilin province, in the country’s north-east.

The pain is only getting worse: the Hang Seng China stock index – a Hong Kong-listed gauge of mainland stocks – is now off 7.2pc, its biggest fall since November 2008.

The route across Chinese stocks is showing few signs of abating, with video gaming giant Tencent falling more than 10pc.

In Hong Kong, the Hang Seng index is now off 5.3pc:

More broadly, today’s drop builds on a wider crash that has taken the total losses on Chinese tech stocks to around 72pc since their peak last year – a dotcom crash-scale wipeout.

The shock of Shenzhen going into lockdown is compounding growing concern that Beijing is damaging its international standing by continuing to align itself with Russia despite recent events.

London’s top stock index is poised to start the week on the front foot, with equity futures trading indicating a rise of about 0.6pc at the open in a minute’s time.

London-listed miner Rio Tinto has tabled a $ 2.7bn to by Turquoise Hill, which is developing a giant gold mine in Mongolia.

Rio already owns 51pc of the company, which had a two-thirds stakes in Oyu Tolgoi project.

It’s a flagship project for Rio – and a key growth hope – but has been plagued by disputes with Turquoise and the Mongolian government.

The all-cash offer price is $ 26.60 per share, a 32pc premium to Friday’s close. There are several hurdles facing the takeover, including the requirement of support from two-thirds of Turquoise shareholders.

Rio Tinto strongly believes in the long-term success of Oyu Tolgoi and Mongolia, and delivering for all stakeholders over the long-term. That is why we want to increase our interest in Oyu Tolgoi, simplify the ownership structure, and further strengthen Rio Tinto’s copper portfolio. We believe the terms of proposal are compelling for Turquoise Hill shareholders.

FTSE to delete Russian groups including Evraz from indexes

FTSE Russell, the subsidiary of the London Stock Exchange that puts together the UK’s top stock indexes, plans to delete a slew of Russian companies from its lists.

In a statement, FTSE Russell said:

FTSE Russell has received feedback from FTSE Russell’s External Advisory Committees and a range of market participants that the ability to buy or sell shares of the index constituents below is severely restricted due to major international brokerage firms no longer supporting trading of these securities and therefore there is insufficient institutional liquidity and market depth. Consequently, this will prevent index trackers from replicating the ongoing inclusion of these names within the FTSE Russell indices.

As a result, it continued, the members will be removed to ensure the index calculations can be “readily understood and followed by index users”.

FCA tells banks to open up about oligarchs – FT

In the UK, the City watchdog has told banks they need to help out with the crackdown on Russian oligarchs by sharing information on how Vladimir Putin’s allies move money around the world.

The Financial Conduct Authority has instructed lenders that it is not enough to just sever ties – they have to offer information as well, the Financial Times reports.

The drawdown on global bonds is now the worst since the height of the financial crisis in 2008, in a sign of the damage being done across markets.

A aggregate index of government and corporate debt compiled by Bloomberg is off about 9.9pc from highs at the start of this year, with Asian bonds suffering especially.

The lockdown comes after virus cases in China doubled to 3,400, and shows the long tail of the country’s strict zero-Covid policy.

Elsewhere, the German subsidiary of the Russian energy company Rosneft has reported a hacker attack, according to Die Welt newspaper, which said there has been no impact on Rosneft’s business. Businesses around the world have been on high alert for cyber assaults ever since Russia invaded Ukraine.

5 things to start your day

1) More guided munitions and fighter jets: what higher spending will mean for Britain’s armed forces: Expanding armored cavalry and artillery will need to be matched with logistical support in the form of supplies, ammunition and engineers

3) End of Russian wood pellets mean soaring bills for biomass boiler owners: Suppliers are scrambling to find alternative supplies for homes and businesses that depend on the fuel for heating

4) Do not blame every Russian for Putin’s barbaric invasion: Companies are right to boycott Russia – now they must ensure their penalties do not validate anger at a nation.

5) Ofgem urged to prepare for Gazprom sanctions: Existing regulations do not allow for measures against licensed operators, energy regulator is warned

Asian stocks fell Monday on a rout in Chinese technology shares, while Treasuries slid as elevated commodity prices stoke concerns that the US may need aggressive monetary policy tightening to tame inflation.

The 8pc plunge into a gauge of Chinese tech firms reverberated around the region, leaving an Asia-Pacific equity index in the red for a second session. A Covid lockdown in Shenzhen, a tech hub, added to the geopolitical and regulatory risks facing the sector in part from strained ties between the US and China.

A climb in Japanese shares amid a weaker yen and gains for S&P 500, Nasdaq 100 and European futures eased some of the gloom. Investors were parsing efforts at diplomacy as Russia continues its war in Ukraine, as well as comments from a US official that Moscow asked China for military assistance.