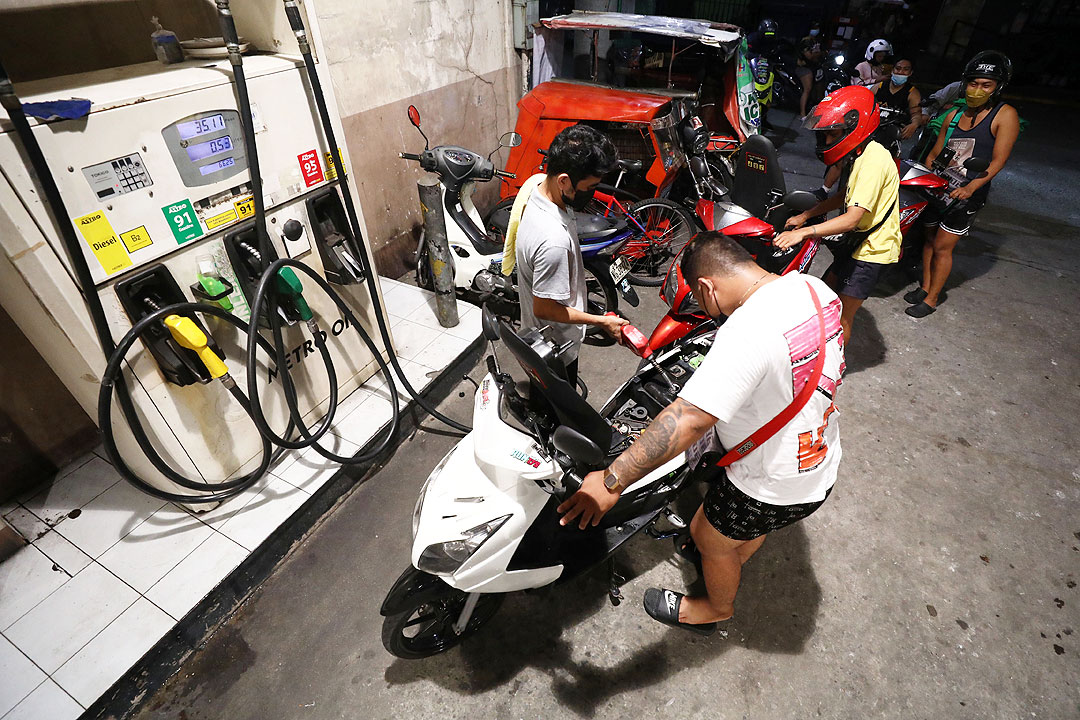 PHILIPPINE President Rodrigo R. Duterte rejected calls to suspend excise tax on fuel products amid soaring pump prices, and instead approved the Finance chief’s recommendation to extend the P200 in monthly aid to poor families for a year.

Mr. Dominguez told a Cabinet meeting on Tuesday that the fuel excise tax imposed under a highly opposed tax reform program must be retained “because we already budgeted it for salaries of school teachers; Build, Build, Build program; and other expenses. ”

Calls to suspend the excise tax on petroleum products have grown louder, especially after fuel retailers on Tuesday raised gasoline and diesel prices by P7.10 and P13.15 per liter, respectively.

Mr. Dominguez said the government is expecting to collect P147 billion in taxes this year from fuel products, of which P131.4 billion is from excise taxes. The rest would be from value-added tax (VAT) imposed on oil imports.

Mr. Dominguez said suspending excise taxes on fuel products would only force the government to borrow more money and would result in P105.9-billion revenue losses in 2022 or around 0.5% of the country’s gross domestic product (GDP) this year. If implemented over the next 10 years, he said losses are projected to reach P1.76 trillion.

Instead, the Finance chief proposed the government provide direct aid to the most vulnerable sectors, allocating P33 billion for unconditional cash transfers to the bottom 50% of all households or an estimated 74.7 million Filipinos. This would mean each qualified household would receive P200 a month or a total of P2,400 as aid.

Mr. Dominguez admitted the P200 monthly aid might not be enough to cushion the impact of fuel price hikes on poor families, but said this is what the government can doffword at this time.

The Finance chief said the funds for the targeted subsidies would be sourced from VAT collections on oil imports.

Russia’s invasion of Ukraine has driven global oil prices higher, affecting countries like the Philippines that import majority of its fuel requirements. Crude prices have fallen below $ 100 this week as China, the world’s biggest oil importer, implemented lockdowns to curb the spread of the coronavirus.

However, a senator said the amount of cash aid set by the government is not enough.

She said the people deserve more amid the rising cost of living across the country, joblessness, and the prolonged pandemic.

Senator Francis “Kiko” N. Pangilinan, who is running for vice-president, and presidential candidate Senator Panfilo M. Lacson also reiterated their calls for the government to suspend the collection of fuel excise taxes.

“Let us try to conserve energy and one of the examples here is through the four-day workweek,” Mr. Chua said at the Tuesday Cabinet meeting. “Every Filipino will still have to work 40 hours per week but instead of five days, it will be four days and instead of eight hours, it will be 10 hours per day. ”

If approved, the wage subsidy would be distributed from April to June. “Given the indirect impact of the global tension on the Philippine economy, we’re seeing that the wage subsidy will be important for the workers,” she said.

A labor group earlier filed a petition seeking for a P470 increase in the daily minimum wage of workers in the capital region, bringing it to P1,007.

Mr. Chua, who heads the National Economic and Development Authority (NEDA), said a P39 increase in the daily minimum wage in the National Capital Region will add one percentage point to inflation.

Transport groups also have filed several petitions to increase jeepney fares by as much as P6.

GDP TARGET
Meanwhile, Mr. Dominguez said the Philippines’ economic growth target this year may take a hit as the ongoing conflict between Russia and Ukraine drags on.

“The Ukrainian war escalation may shave off 0.4% of our gross domestic product (GDP) target. We are taking a look at it right now. It all depends on how long this crisis will last, ”he said at the Bloomberg ASEAN Business Summit held virtually on Wednesday. “The longer it takes, the worse it is for everyone.”

Economic managers are targeting 7-9% GDP growth for this year.

Mr. Dominguez said the crisis is pushing up prices of commodities, and may affect potential investments in the country.

“Last year, we had the highest foreign investment ever at $ 10 billion, and we think this crisis is making investors in the West look elsewhere,” he said. – with Tobias Jared Tomas