Berkshire bought the shares between Monday and Wednesday at prices ranging from $ 52.99 to $ 55.38, according to a filing late Wednesday.

Buffett’s company is digging even deeper into Occidental’s stock as surging oil prices buoy the US shale driller. Berkshire disclosed in early March that it had built up a common stock investment in the oil giant in addition to its preferred stock holding, a little less than two years after Berkshire exited a common stock holding in Occidental. Buffett told CNBC in March 2021 that he started buying the stock after one of Occidental’s earnings calls.

Occidental surged this month after Berkshire’s earlier investment and as the war in Ukraine drove oil prices higher. The company hiked its dividend 1 200% in February and has sought to cut debt by buying back some of its bonds. Even as Occidental benefits from higher prices, Chief Executive Officer Vicki Hollub warned that US oil drillers can not significantly expand production in the short term to fill the gap caused by sanctions on Russia, citing labor shortages and supply-chain challenges. 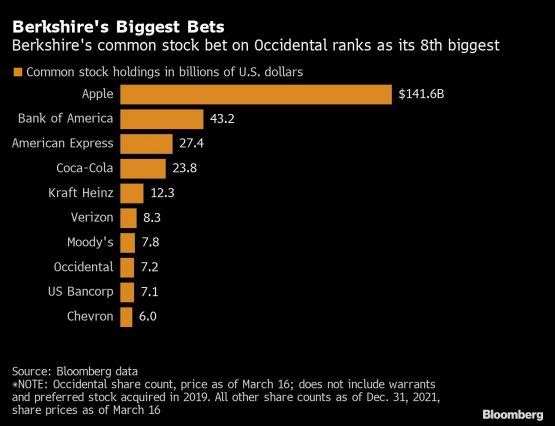 After a decade of burning through profits in order to boost production in the shale patch, explorers have begun heeding investor demands for greater austerity. They’re expected to keep spending growth limited this year so they can boost free cash flow and return more to shareholders.

Berkshire built its preferred stake in the oil producer when it invested $ 10 billion to help finance Occidental’s Anadarko Petroleum Corp. acquisition in 2019.