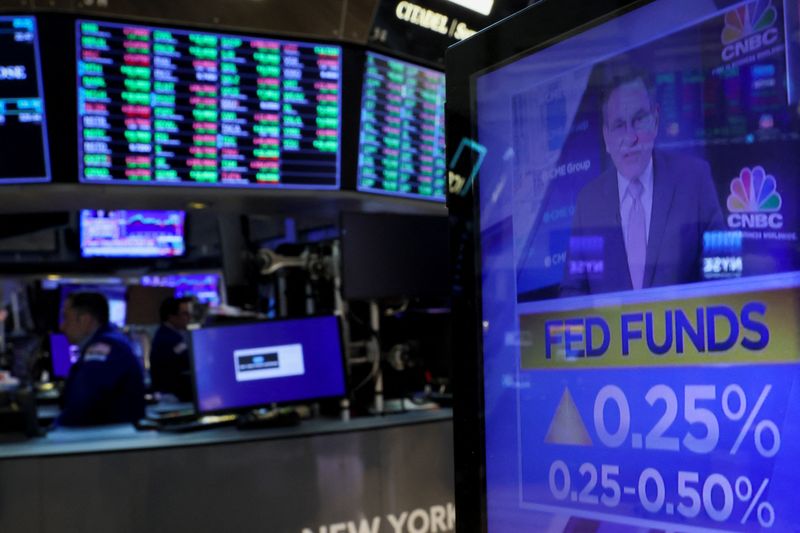 © Reuters. A screen displays the Fed rate announcement as traders work on the floor of the New York Stock Exchange (NYSE) in New York City, US, March 16, 2022. REUTERS / Brendan McDermid

(Reuters) – Federal Reserve policymakers on Wednesday signaled much faster interest rates hikes this year than they had expected just a few months ago, getting them to about 1.9% by the end of the year as they try to tamp down soaring inflation.

Markets swiftly priced in their agreement, and then some, with trading in contracts tied to the Fed’s target policy rate pricing at a rate of 1.93% by the end of 2022.

The last time the Fed raised rates as quickly as policymakers now expect was in 2004-2006.

Back then, they lifted rates by a quarter of a percentage point at every meeting; since then they have gone much slower when tightening policy, amid weaker recoveries and sleepier inflation.

Now, with inflation by the Fed’s preferred inflation gauge running at three times its 2% goal, policymakers are “acutely” aware of the need to stabilize prices and committed to doing so, Fed Chair Jerome Powell said Wednesday.

But the exact pace of the rate hikes remains in question, with markets pricing in a good chance of a half-point interest rate hike in May or June.

Powell left the door well open to that possibility, saying repeatedly that if inflation did not cool off as expected, the Fed would accelerate its rate hikes.

And indeed, seven of the Fed’s 16 policymakers penciled in rate hike paths that would require at least one half-point increase, if not more, this year.

“Clearly, the (Fed’s policysetting) committee intended to send an aggressive signal of their resolve to rein in inflation and keep inflation expectations in check,” wrote Regions’ Chief Economist Richard Moody.

The markets got the message.