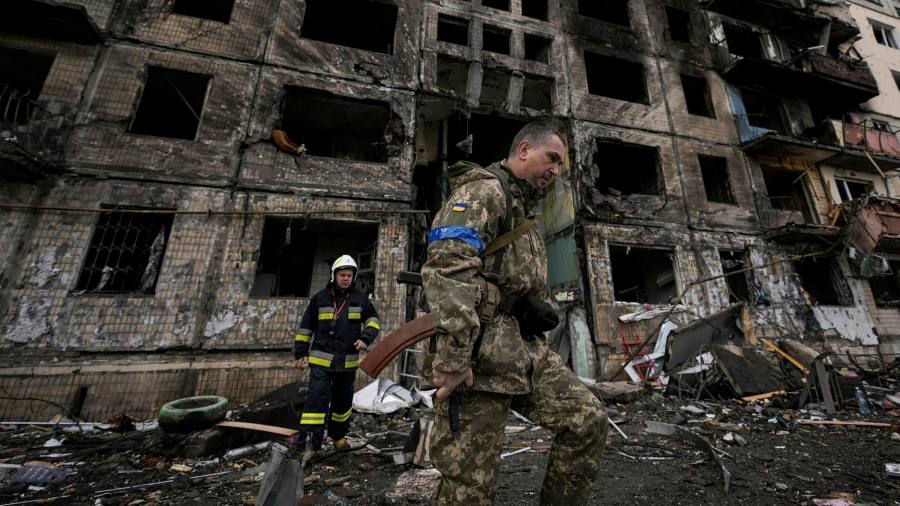 Three horsemen of the apocalypse have arrived: war in Europe, pestilence in Asia and interest rate rises in the US. The market response: shrug and keep on buying the risky stuff.

Almost unbelievably, European stocks have now fully recovered from the shock of Russia’s invasion of Ukraine. The Stoxx 600 index dropped more than 10 per cent from immediately before the invasion in late February to the low point on March 7. It is now right back where it started, after the biggest weekly rally since late 2020. Roughly the same goes for Germany’s Dax, which dropped even more heavily and is now close to the starting point again.

This is despite an overwhelming consensus that the EU economy will suffer, possibly greatly, from the war next door, largely through the impact of painfully high energy prices. Goldman Sachs, for one, has chopped its growth forecast for the year from close to 4 per cent before the war, to 2.5 per cent now. But it seems the developing narrative that the Ukraine war will foster greater EU cohesion and, crucially, heavier government spending on defense, is winning the day.

In Asia, this week brought a rather depressing reminder that Covid-19 is not over. On Monday, Chinese stocks in Hong Kong had their worst day since the global financial crisis, with a more than 7 per cent drop after authorities announced a six-day lockdown in Shenzhen to counter another coronavirus outbreak.

Analysts at ANZ calculated that just a one-week shutdown of the region could lop as much as 0.8 percentage points off growth for the year. Clearly, the path back to well-functioning global supply chains will not be smooth.

Making matters worse, investors are fretting that at some point soon, China will have to more clearly pick a side over the conflict in Ukraine. “There’s a worry that China will somehow get itself embroiled in sanctions,” says Ron Temple, head of US equities and co-head of multi-asset at Lazard Asset Management.

Again, though, fast-forward to the end of the week and China’s stock markets are back in business after Liu He, the Chinese president’s closest economic adviser, promised measures to boost the economy, along with unspecified “policies that are favorable to the market ”. Details were not immediately forthcoming, but it does not matter – investors can spot a good dollop of extra monetary or fiscal stimulus from 50 paces.

And, of course, the US Federal Reserve finally did it. It raised interest rates for the first time since 2018, with a quarter-point increase that is likely to be just the first of several through this year’s course.

The dreaded end of the monetary stimulus has hung over riskier assets for months. In the end, though, the S&P 500 index shot more than 2 per cent higher on Fed day and just kept on going from there.

The Nasdaq Composite, stuffed with precisely the high-tech stocks that are considered most vulnerable to tighter monetary policy, has had its best week in a year. Sure, it’s down by nearly 13 per cent so far in 2022, and Goldman Sachs’ index of unprofitable tech stocks is still down around 60 per cent this year. But a 6.5 per cent gain in the Nasdaq in a week is not to be sniffed at.

“I still think some of the speculative tech stocks in the US are overvalued,” says Lazard’s Temple. “But there’s still a strong case for US equities. Maybe for the next few years, we grow the earnings into the valuations. ”

The game has changed; tracking indices higher and calling yourself a genius is a trick that has worn thin. Investors “overdosed” on clinging to broad stock market indices in recent years, says Michael Kelly, global head of multi-asset at PineBridge Investments.

Putting blunt rate rises to one side, the Fed’s process of chopping back the $ 9tn balance sheet it has run up to provide stimulus to the financial system will be tricky for investors to navigate, he notes. “It’s very hard for the markets to front run it,” he says. “I do not believe the ‘priced in’ story. I do not believe it can be priced in. ” Exploiting niches rather than following the herd will be important from here, he says.

Still, investors are clearly determined to pick out the positives. In a note this week, Credit Suisse’s investment committee said that following an ad hoc meeting, it had decided to flip to an overweight position in equities.

The benign reaction to the Fed rate rise suggests “markets have had enough time to digest the changed economic outlook”, it said. “Glimmers of hope” over a ceasefire in Ukraine have emerged, it added. And a pullback in commodity prices suggests the Russian shock could “allow the global economy, including Europe, to stay on a solid growth path”.

Analysts at UBS Global Wealth Management said the pick-up in US stocks since the Fed’s meeting shows “how rapidly markets can turn on investor perception of geopolitical risks change”.

“It also reinforces our view that simply selling risk assets is not the best response to the war in Ukraine,” they said.

In short: markets are all about how fears match up to reality, and everything could have been worse. We should hope that is not tempting fate.