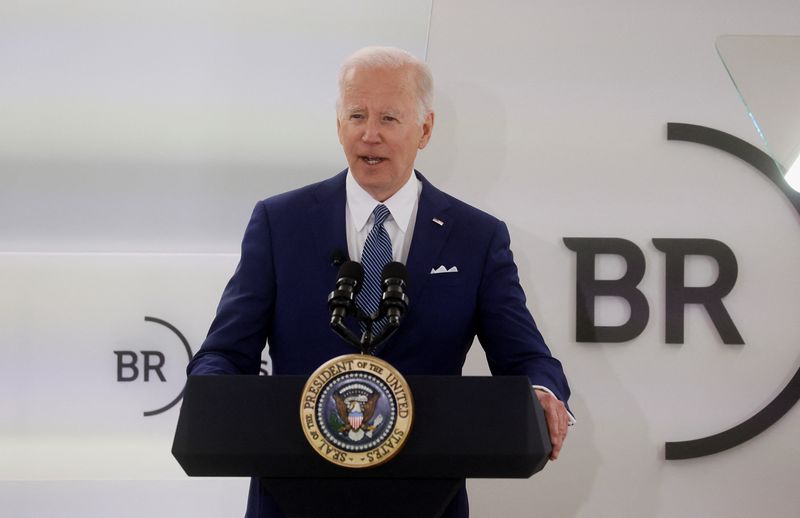 
By Nandita Bose and Alexandra Alper

WASHINGTON (Reuters) -Russia’s false accusations that Kyiv has biological and chemical weapons illustrate that Russian President Vladimir Putin is considering using himself in his war against Ukraine, US President Joe Biden said on Monday, without citing evidence.

Putin’s “back is against the wall and now he’s talking about new false flags he’s setting up including, asserting that we in America have biological as well as chemical weapons in Europe, simply not true,” Biden said at a Business Roundtable event.

“They are also suggesting that Ukraine has biological and chemical weapons in Ukraine. That’s a clear sign he’s considering using both of those.”

The Russian embassy in Washington did not immediately respond to a request for comment.

The remarks echoed prior comments by officials in Washington and allied countries, who have accused Russia of spreading an unproven claim that Ukraine had a biological weapons program as a possible prelude to potentially launching its own biological or chemical attacks.

Russia’s defense ministry has accused Kyiv, without providing evidence, of planning a chemical attack against its own people in order to accuse Moscow of using chemical weapons in the invasion of Ukraine that began on Feb. 24.

Earlier this month, US national security adviser Jake Sullivan spoke with Nikolay Patrushev, secretary of Russia’s Security Council, warning him of consequences for “any possible Russian decision to use chemical or biological weapons in Ukraine.” The White House did not specify what those consequences would be.

Biden also said Russia used a hypersonic missile to destroy a weapons depot on Saturday “because it’s the only thing they can get through with absolute certainty.”

An administration official clarified Monday evening that Biden was confirming Russia’s use of such an advanced missile, but noted that the impact of the attack was unknown. One senior US defense official had earlier raised questions about the legitimacy of the Russian account. [L2N2VO18C]

Russia’s invasion, which it calls a “special military operation” to disarm Ukraine, has largely stalled, failing to capture any major city, but causing massive destruction to residential areas.

Ukraine said on Monday it would not obey ultimatums from Russia after Moscow demanded it stop defending besieged Mariupol, where hundreds of thousands of civilians are suffering through Russian bombardments.