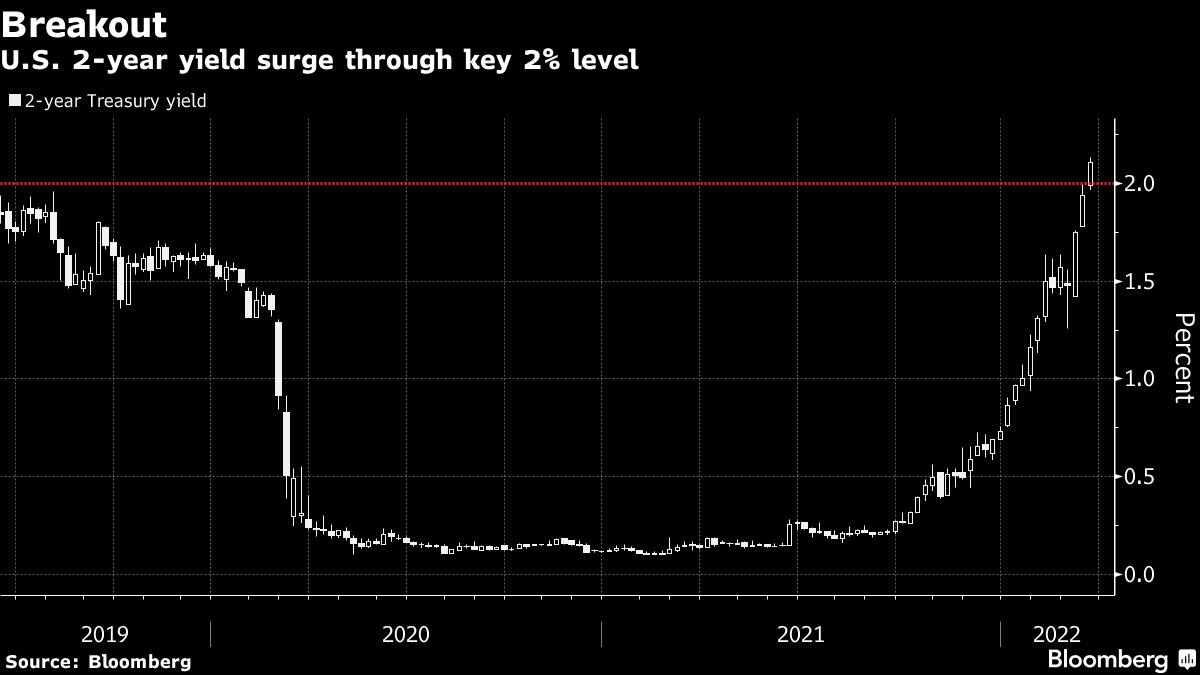 (Bloomberg) – The US bond market reeled further on Tuesday, extending Monday’s declines after Federal Reserve Chair Jerome Powell’s aggressive rate hike comments drove yields on short-dated Treasuries to one of their biggest daily jumps of the past decade.

The central bank chief’s hawkish tone led traders to rapidly ratchet up estimates for how aggressively the Fed will tighten monetary policy this year as rising commodity prices threaten to add fuel to the fastest consumer-price increases in four decades.

His comments on the possibility of a half-point hike, which doubled down on the message he gave after last week’s Fed meeting, sent yields across much of the curve to the highest since 2019. Those on two-year notes rose 5 basis points to 2.17% on Tuesday, after soaring 18 basis points Monday. The gap between 5- and 30-year yields narrowed further to the smallest since 2007, indicating expectations tighter policy will slow the economy or even cause a recession.

The moves compounded what is on course to be the worst quarterly losses the market has seen since at least 1973. The Bloomberg US Treasury Index has lost 5.55% since Dec. 31, surpassing the 5.45% slump at the start of 1980 that stands as the biggest quarterly decline since the gauge’s inception.

The severity of the losses underscores the degree to which some investors have underestimated just how far the central bank is willing to go in order to control inflation.

Monday’s yield move was “pretty violent,” said Tracy Chen, a portfolio manager at Brandywine Global. “At the end of last week, investors including us were thinking the long-end looks cheap. But our models can not factor in the uncertainty about inflation from the commodity price shock. ”

The tone of Powell’s remarks reinforced the view that the main monetary-policy concern from the war in Ukraine is that it will worsen inflation and leave it more entrenched in the US economy. That such a risk appears more prominent than a slowdown in growth opens the door to tightening policy at a much faster pace toward the bank’s late-2023 target of 2.8% for overnight rates.

Derivative traders Monday priced in about 7.5 quarter-point rate hikes at the remaining six FOMC meetings this year, effectively making provision for more than one half-point rise. It has not raised rates that steeply at any of its meetings since 2000.

The three-year yield at one stage jumped more than 20 base points on Monday and ended the day at 2.32%, up around 18 base points, notching one of the biggest one-day advances at that tenor in the past decade.

While the price moves were strongest in the shorter-dated parts of the Treasury market that is typically hit hardest by monetary-policy tightening, yields also jumped on the longer end, including on the 10-year benchmark that serves as a touchstone for global markets and underpins the cost of borrowing for households and companies.

Thomas Atteberry, a more than three-decade bond-market veteran who manages money at First Pacific Advisors, said Powell adding such a large degree of uncertainty to the size of the Fed’s rate changes has bumped up the risk in fixed-income markets and potential for pain ahead.

“In recent past cycles the Fed was much more methodical in their hiking cycles, so basically you were not getting surprised,” Atteberry said. “Powell adding this optionality and taking the past-cycle predictability off the table makes it just more more volatile and unpredictable. This has made the environment more difficult for fixed-income investors. ”

The rise in yields has been seen worldwide as central banks pull back on pandemic-era stimulus to keep inflation from becoming unmoored. Ten-year yields in Germany, the UK and Japan have all risen this month, in some cases threatening to reduce demand for Treasuries from overseas buyers.

With Powell’s remarks indicating that the US central bank is squarely focused on the inflationary consequences of the commodity-price jump – rather than its impact on consumer demand – bond traders are speculating that the Fed may welcome a rise in longer-term yields that would ripple through the economy.

That has also shifted a lot of focus to whether the Fed will use the planned shrinking of its balance sheet holdings, known as quantitative tightening, in a more active way than their 2017-2019 unwind to put more upward pressure on long-date yields.

“The Fed has a big constraint now, which is inflation that is just too high now,” said Andrew Hollenhorst, chief US economist at Citigroup Inc. “The context in which this QT will be happening now is that the Fed is fighting against inflation and wants to actually do things that are going to tighten financial conditions. So the upcoming round of balance-sheet run off will most likely be anything but ‘watching paint dry’ – the description used in the last reduction cycle. ”

With a couple of notable exceptions, the speed and scale of Monday’s repricing confounded bond-market strategists at several large banks, who’d judged that steep increases over the past two weeks made it risky to be positioned for even higher yields. Strategists at Bank of America Corp., Barclays Plc, Citigroup and Deutsche Bank AG cautioned against maintaining short positions coming into this week.

The exceptions included Goldman Sachs Group Inc., which recommended positioning for the possibility of one or more half-point Fed rate increases at some point this year and for a bigger total number of increases than the market was pricing in. Likewise, Morgan Stanley said the market could “easily” price at a 3% rate for the Fed’s benchmark at the end of its cycle “in the coming days” and raised its year-end Treasury yield forecasts.

Powell’s hawkish tone also conveyed a dismissal of the recession risk signaled by this year’s pronounced flattening in the yield curve between two- and 10-year notes and in the gap from five- to 30-year yields. He said he’s focused on the gap between shorter-term rates.

“We are seeing a breakout in the long end and we do not know long it lasts until buyers step in,” said Ian Lyngen, head of US rates strategy at BMO Capital Markets. “This is a credibility event for the Fed and the more aggressive they are, the market has to ask what does it mean in practical terms for the chances of a recession and the performance of risk assets.”