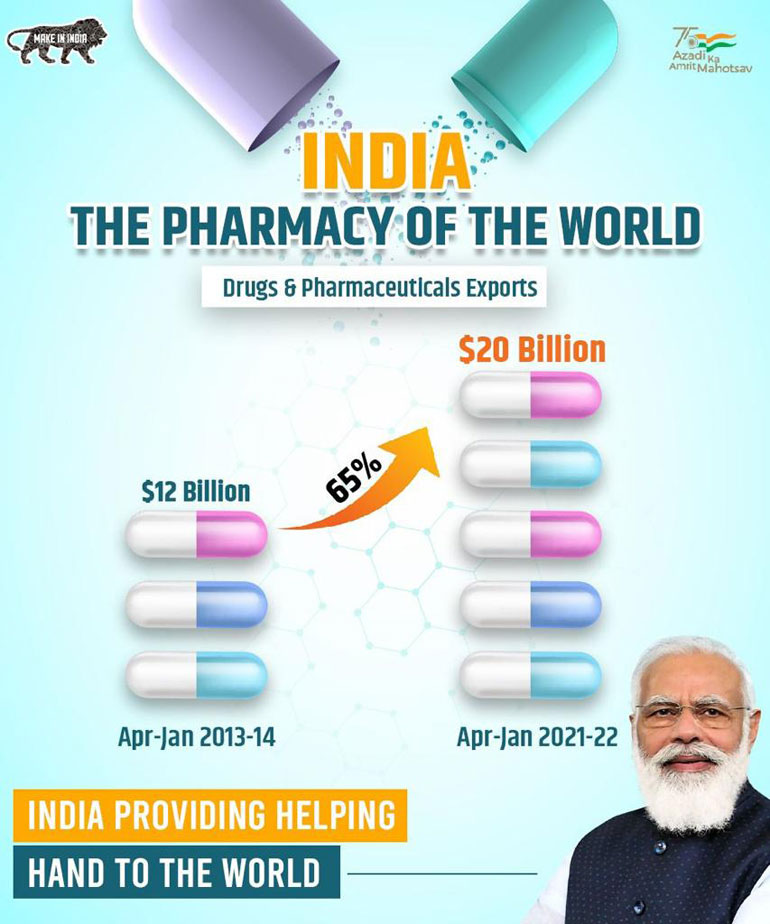 India’s pharmaceutical industry has achieved significant growth in both domestic and global markets over the past five decades. Within India, while just 5% of medicine consumption was met by local production in the 1960s, the share of ‘Made in India’ medicines in the Indian pharma market has today reached more than 80% (2020). Equally significant, during the past few decades, Indian pharma has also established a leading position in the global pharma landscape, leading to the country today being hailed as the “pharmacy of the world.”

Presently, Indian pharma industry contributes more than 20% by volume of the global generics market. As a source of around 60,000 generic brands across 60 therapeutic categories, Indian pharma accounts for nearly 40% of generics demand in the USA and 25% of all prescription medicines in the United Kingdom. Further, it has become the partner of choice for chronic treatments, meeting 80% of the global demand for antiretrovirals drug for treatment of HIV-AIDS.

Another area where Indian pharma has done remarkably well is in meeting global demand for vaccines. Today, Indian companies are supplying vaccines to more than 150 countries, accounting for more than 60% of the global demand for human vaccines. Nearly 40% -70% of WHO’s demand for Diptheria, Pertussis and Tetanus (DPT), Bacillus Calmette Guerin (BCG) and 90% of the WHO’s demand for the measles vaccine are met by India. This has been made possible because of ongoing strategic focus on R&D combined with mass manufacturing capabilities.

Indian vaccine companies also invested in incremental innovations for some common diseases. For instance, introducing an oral equivalent of an injectable vaccine to improve compliance, adjusting their formulations to improve stability, improving adjuvants and other tweaks that improve existing products. Bharat Biotech’s typhoid conjugate vaccine and Hepatitis B vaccine and Serum Institute of India’s liquid rotavirus vaccine are examples of such incremental improvements.

Indian pharma’s defining moment came during the COVID-19 pandemic. India produced and supplied vaccines to the world through its ‘Vaccine Maitri’ (vaccine friendship) initiative as well as supplied in bulk to the COVAX facility. There were many firsts, which reconfirmed the resilience and adaptability of Indian pharma and diagnostics industry during the new challenges set forth everyday by the pandemic. For instance, India journeyed from zero to manufacturing 200,000 PPE kits per day in a remarkably short time. These leaps were a result of a remarkable collaboration between the government and the industries to mass-produce niche products from scratch.

In the present decade, the Indian pharma industry is expected to grow at CAGR of 12% from US $ 41.7 billion in 2020 to reach US $ 130 billion by 2030. Historically, the industry’s growth was led by clinical research trials and export of generic formulations, as well as vaccines. The focus is now squarely on diversification into new sub-segments – complex Generics, Biosimilars, Biologics, New Chemical Entities, Cell and Gene Therapy, complex vaccines and Retail Diagnostics.

Indian pharma product portfolio is moving quickly from generics to these sub-segments with a strong emphasis on research and development (R&D) and academia-industry collaborations. To further boost and reward innovation culture in the country, the Government of India declared the last decade (2010-2020) as the decade of innovation and also launched initiatives such as ‘Make in India’ and ‘Startup India’, which also enabled significant R&D in the pharma sector as well.

According to a WHO survey, India had already approved 93 biosimilars (with at least 50 on the market) by August 2019 as compared to 26 in the USA and 61 in Europe, with a market size of US $ 576 million. Interestingly, the first biosimilar in India was approved in early 2000, long before those were approved in more advanced economies. According to a recent report from the Biotechnology Industry Research Assistance Council (BIRAC), more than 52 Indian companies collectively have over 200 biosimilars in the pipeline.

With 665 US Food and Drug Administration’s approved manufacturing facilities, the highest in the world, along with sustained cost competitiveness, India continues to be a preferred destination for outsourcing of research and manufacturing activities. The Production-Linked Incentives and bulk drug park schemes, implemented by the Government of India, also aim to increase the manufacturing of active pharmaceutical ingredients (APIs) in India. Further, under the new Clinical and Drug Trial Rules (2019), the cost of clinical trials in India would be 40% -60% cheaper than developed markets, making it an even more preferred destination.

India’s pharma industry is rapidly transitioning towards the 4th Industrial

Revolution (Industry 4.0), with adoption and use of advanced technologies such as artificial intelligence, additive manufacturing, precision and preventive medicine, as well as telemedicine. Moreover, the Government is actively supporting digital health services, given the country’s superb digital infrastructure that allows for fast and cost-effective data sharing.

India follows a civilizational credo of ‘Vasudhaiva Kutumbakam‘-‘ the world is one family. ‘ By exporting nearly half of their production, both in volume and value to partner nations, Indian pharma continues to significantly contribute towards improving public healthcare outcome, both in India and across the globe.

Spotlight is BusinessWorld’s sponsored section that allows advertisers to amplify their brand and connect with BusinessWorld’s audience by enabling them to publish their stories directly on the BusinessWorld Web site. For more information, send an email to online@bworldonline.com.

Join us on Viber to get more updates from BusinessWorld: https://bit.ly/3hv6bLA.