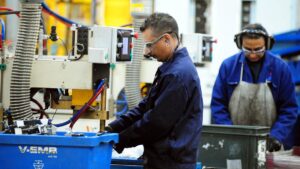 The proportion of manufacturers expecting to increase prices has jumped to its highest level since records began in 1975.

The latest monthly industrial trends survey from the CBI showed planned price rises over the next three months, underlining the rapidly increasing scale of inflation pressures on UK companies.

The employers’ organization, which had responses from 229 businesses, found a net balance of 80 per cent of manufacturers are raising the price of orders booked for the next three months from March, compared with 77 per cent last month.

Businesses also told the organization that output volumes continued to grow at a “robust pace” over the three months to March. The survey showed a joint record share of manufacturers reported higher order books this month, with the net balance matching November’s record high of 26 per cent.

Anna Leach, deputy chief economist of the business group, said: “This survey highlights strong order books and output growth, but the cost pressures facing manufacturers have been amplified by the conflict in Ukraine.

“The government must use the spring statement to provide relief to both energy-intensive industries and vulnerable consumers. To deliver a fundamental reset to UK growth, we need to see significant action to incentivize investment. ”