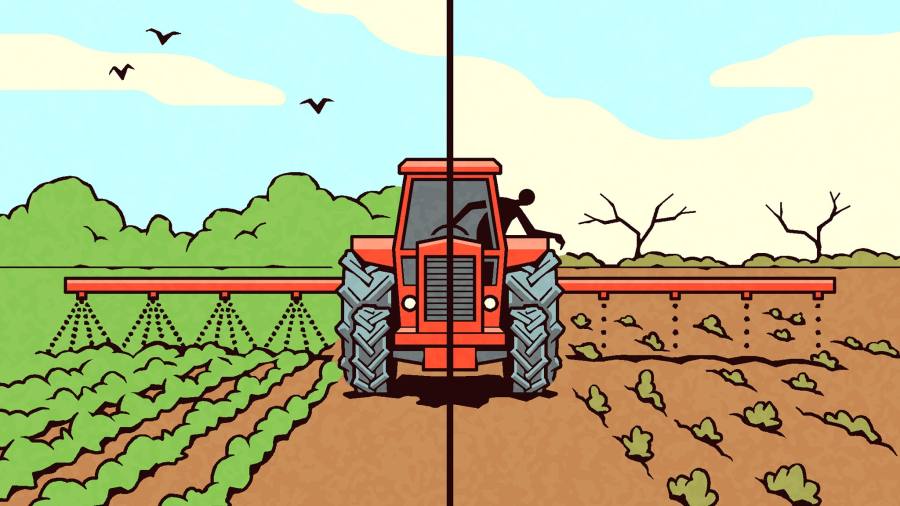 We know that the war in Ukraine has led to sharp increases in prices for both food and fuel. This in turn has sparked concern that we may see a repeat of the famine and food riots that took place in 22 countries in the years following the global financial crisis, caused by a perfect storm of rising commodities prices.

While US wheat farmers should be in a good position to help buffer some of the pain from agricultural disruptions in Ukraine and Russia, they are worried about inflation of another sort – in fertilizer.

The war is part of that problem, too. Russia was until recently the second largest foreign exporter of fertilizer to the US, providing 10 per cent of the total supply. But it is not the only reason prices are rising.

As a March 11 release from the US Department of Agriculture put it: “Fertilizer prices have more than doubled since last year due to many factors including [Vladimir] Putin’s price hike, a limited supply of the relevant minerals and high energy costs, high global demand and agricultural commodity prices, reliance on fertilizer imports, and lack of competition in the fertilizer industry. ”

It’s that last point that has many farmers in America’s own breadbasket angry. “Farmers here are already making a decision to apply less fertilizer because of prices,” says Joe Maxwell, a Missouri farmer and co-founder of the Farm Action network, an alliance of farmers, ranchers and food system workers, most of whom work outside of the large corporate agricultural sector. “That will mean lower production, and that is in turn one of the things that could spark global instability.” Corporate concentration is, in Maxwell’s view, one of the systemic factors fuelling this.

A Farm Action report released in January noted that while many areas of American agriculture have a concentration ratio in which the market share of the top four companies exceeds 40 per cent (the level at which economists say that market abuses start to occur more frequently), fertilizer has experienced some of the highest levels of consolidation in the past 25 years.

As the report puts it: “Between 1980 and the mid-2000s, low commodity prices and high input expenses led to a drop in demand. During this time period, we saw the number of fertilizer firms decline from 46 to 13. As the price of natural gas (from which nitrogen-based fertilizers are derived) dropped and demand increased, this pattern of consolidation continued. ” Today, just two companies, Nutrien and the Mosaic Company, supply the entirety of North America with potash, a potassium-based fertilizer.

Fertilizer expenses have increased far beyond the levels that agricultural simulation models would have predicted. Farmers say price gouging is part of the problem. Nutrien, for example, reported a 51 per cent increase in the cost of goods for nitrogen production (a key fertilizer input) in the third quarter of 2021, while gross manufacturing margins were up 680 per cent over the same period. The company declined to comment.

These and other such examples have increased the already deafening calls for monopoly actions in the US. On March 11, the USDA put out a call for public comment on anti-competitive market practices in fertilizer, seed and agricultural inputs. It also announced a $ 250mn grant program starting this summer which will “support independent, innovative and sustainable American fertilizer production to supply America farmers”.

As agriculture secretary Tom Vilsack said in the announcement: “Recent supply chain disruptions from the global pandemic to Putin’s unprovoked war against Ukraine have shown just how important it is to invest in this crucial link in the agricultural supply chains here at home.”

Geopolitical instability will certainly lead to more “local for local” production and calls for insourcing – for reasons that range from worries about cross-border trade hitches, to the rising cost of energy for transport and the emissions associated with it.

But antitrust actions will be as much about curbing domestic players as foreign ones.

Fertilizer makers – not to mention the big four beef packers currently being probed by the justice department and the USDA – include both. “It’s pretty clear that we need to make a fundamental shift in how these markets work,” says Andy Green, a senior adviser for fair and competitive markets at USDA.

That will require a varied approach, including everything from antitrust action and support for smaller players (such as the $ 1bn fund for independent meat and poultry packers) to reducing financial speculation in commodities (derivatives trading played a big role in post-crisis food and fuel inflation).

It will also require fundamentally reconsidering how we eat. One reason why farmers require increasing amounts of fertilizer is that industrial agriculture has put such huge demands on the planet. A recent UN report, which called for more diverse farming and ranching methods, warned that nearly a third of the world’s crop fields would be unsuitable for food production by the end of this century because of the climate change that is itself caused in large part by the emissions-heavy farming methods of Big Food.

It’s an unappetizing thought, to say the least.