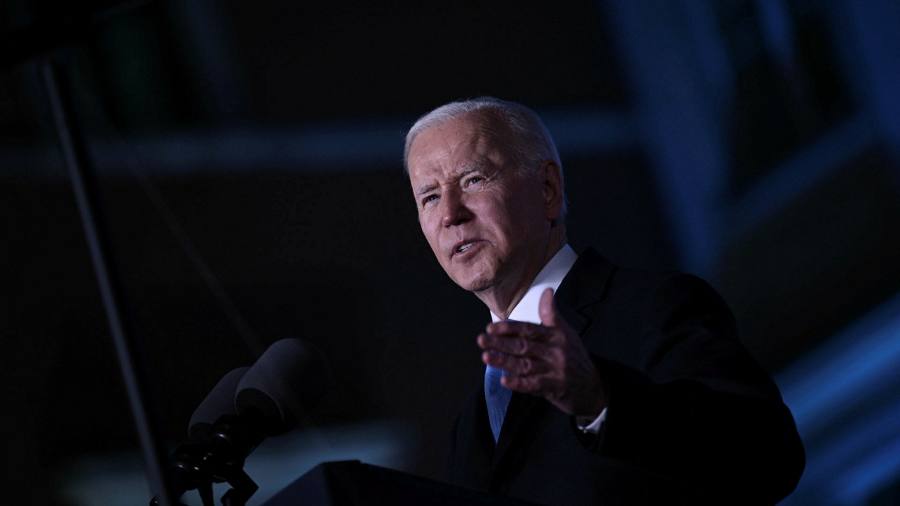 US President Joe Biden has denied that the US is seeking to overturn Vladimir Putin’s regime after appearing to call for the ousting of his Russian counterpart, as European leaders stressed the importance of avoiding an escalation of geopolitical tensions.

In a speech in Warsaw on Saturday, Biden condemned Putin’s “brutality” in the invasion of Ukraine, saying: “For God’s sake, this man can not remain in power”.

On his return to Washington the following day, Biden was asked by a reporter if he was calling for regime change. The US president replied: “No.”

Earlier, US Secretary of State Antony Blinken said that the US had “repeatedly” stated that “we do not have a strategy of regime change in Russia – or anywhere else”.

Speaking in Jerusalem on Sunday, Blinken said: “The president, the White House, made the point last night that, quite simply, President Putin cannot be empowered to wage war or engage in aggression against Ukraine or anyone else.”

Blinken’s comments were the second US attempt to walk back what appeared to be a call to oust Putin from power during a speech in which Biden warned transatlantic democracies to steal themselves for a “long fight ahead” to protect freedom in Europe. 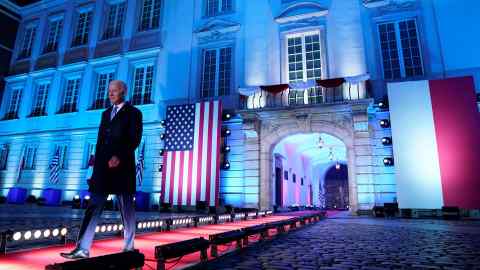 The White House later said that “the president’s point was that Putin can not be allowed to exercise power over his neighbors or the region”, rather than a plan for regime change.

European countries emphasized the importance of avoiding an escalation of the geopolitical situation.

“[In the EU] we are not after a regime change, that is something for the Russian citizens to decide, if they of course could decide that, ”Josep Borrell, the EU chief diplomat, said when asked about Biden’s comment.

French President Emmanuel Macron said he would not echo Biden’s words and that efforts should be made to avoid worsening the situation, adding that he aimed to continue talking to Putin in an attempt to bring about a ceasefire.

“I think we need to be factual and do everything not to allow the situation to spiral,” Macron told France 3 TV. “I will not make those kinds of comments. . . We should not be in an escalation of words or actions. ”

The UK said it was not pushing for regime change and believed Putin should be offered an “off ramp” from the war. “It’s good in principle to incentivize good behavior, not encourage worse behavior by suggesting there is nothing left to lose,” said one senior British official.

Liz Truss, UK foreign secretary, told the Sunday Telegraph that sanctions could be lifted if Putin withdrew from Ukraine and committed to “no further aggression”.

Ibrahim Kalin, a top aide to Turkish President Recep Tayyip Erdogan, said it was important to try to understand Moscow’s position. Ankara, which has strived to maintain close ties with Moscow and Kyiv, has sought to act as a mediator. “If everybody burns bridges with Russia then who is going to talk to them, at the end of the day?” he said.

One official from a NATO member state said: “Real leadership means supporting the Ukrainians with equipment in such a way that they can cause the Russians big losses.”

“The Russian interpretation will be that this confirms that US priority is not the rescue of Ukraine, but the destruction of Russia,” he wrote on Twitter. “Emotionally, Biden’s statement is understandable, but quite unwise, strategically.”

Biden’s remarks drew condemnation from Moscow. Dmitry Peskov, Putin’s spokesperson, told the state-run Tass agency that “these personal insults narrow the window of opportunity for our bilateral relations [to improve] under the current [US] administration”.

Russia’s military is pursuing its threat to encircle Ukrainian forces in the east while stepping up attacks on fuel and food depots across the country according to western military assessments.

“Russian forces appear to be concentrating their effort to attempt the encirclement of Ukrainian forces directly facing the separatist regions in the east of the country, advancing from the direction of Kharkiv in the north and Mariupol in the south,” the UK ministry of defense said on Sunday. 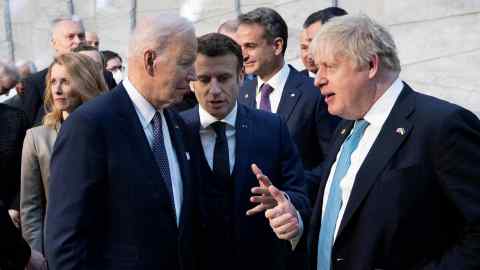 The governor of Sumy, a region on the northern border with Russia, said Ukraine’s forces had retaken two towns on the supply route to the regional capital.

Vadym Denysenko, an adviser to Ukraine’s interior ministry, said Russia had begun targeting food and fuel storage facilities and had started building up forces near the border, suggesting it was planning new assaults, according to Reuters.

Also on Sunday, the leader of the Luhansk People’s Republic, one of two Moscow-backed separatist groups in Donbas, said the group could soon hold a referendum on joining Russia – a possible precursor to the formal annexation of more Ukrainian territory by Moscow.