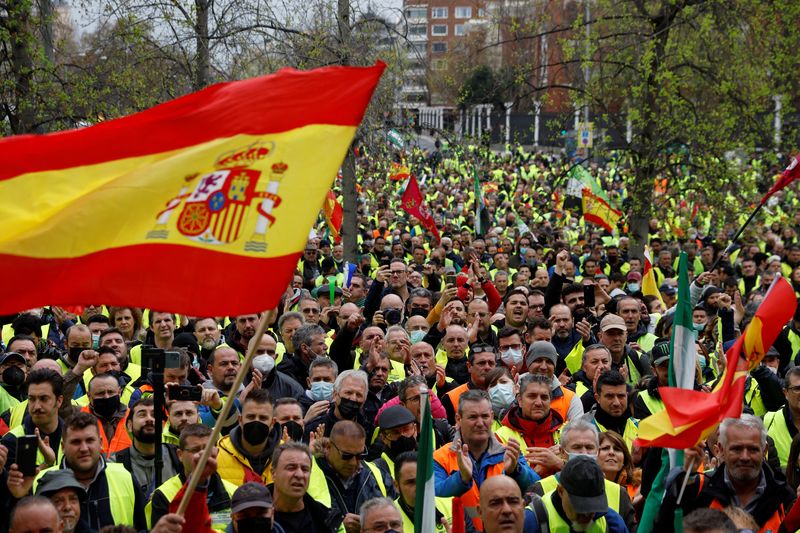 By Belén Carreño and Inti Landauro

The government will approve on Tuesday the package to mitigate the fallout of Russia’s invasion of Ukraine, Prime Minister Pedro Sanchez said at a corporate event.

“The war response shock plan will protect industries and citizens,” he said.

The three-month plan will come into force on April 1.

Truck drivers have been on strike for two weeks over fuel prices, causing sporadic goods shortages around the country.

Around 6 billion euros will come as direct aid and tax cuts mostly extended from a previous package related to the COVID-19 pandemic, while the remaining 10 billion euros are subsidized loans. There will also be limits on house rent increases and caps on energy prices.

It will initially be approved by decree as the government’s fragile parliamentary majority makes approval in Congress difficult.

Highly exposed to external shocks, Spain was among the worst hit European countries by the pandemic and responded with a mammoth 140 billion euro economic rescue plan. Now faced with protest at home over energy prices, which soared 60% in a year to February and pushed inflation close to 8%, Madrid is taking new steps to protect its economy.

Sanchez on Friday broke off negotiations at the European Council until he secured an “Iberian exception” for Spain and Portugal that would allow them to cap gas prices.

The government is now thrashing out the details of its plan pending final European approval.

The cap on gas prices, cold be set at 30 euros per megawatt / hour, according to a minister from Unidas Podemos, a junior partner in Spain’s ruling coalition.

The government will also extend a fuel subsidy for truckers and transportation companies to all citizens.

According to the plan, the government will pay for 15 cents per liter, while petrol companies will cover at least a further 5 cents.

Rent increases will be capped at 2% for three months – an unprecedented measure – and employers will not be allowed to dismiss workers for economic reasons related to the invasion, but furlough schemes will be available.

Borrowers that are intensive energy users will be given a 12-month grace period, when the companies will be required to pay interest, but not the principal on a loan.

Consumer associations have criticized the package as insufficient and some truckers remain on strike, albeit causing less disruption than last week.