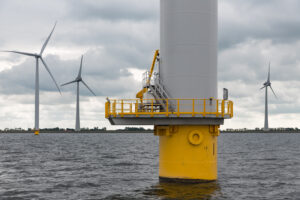 A 50 per cent stake in a huge offshore wind farm being built off the Yorkshire coast has been sold for £ 3 billion to a pair of French investors.

The investment arm of Axa, the insurance group, and Crédit Agricole, the bank, have bought half of the Hornsea Two project from Danish company Orsted, the world’s biggest offshore wind developer.

Analysts at Bernstein said that the price paid by Axa and Crédit Agricole valued Hornsea Two at about a third more than they thought it was worth. They added that it “demonstrates the value external investors are ready to place on such assets” as the world embarks on a shift in how power is generated.

Hornsea Two, which lies about 50 miles off the Yorkshire coast in the North Sea, spans 160 square miles. It is still being built but is due to be commissioned this year, at which point it will become the world’s largest offshore wind farm, a title presently held by Hornsea One.

Once complete, Hornsea Two’s 165 turbines will have a capacity of 1.3 gigawatts, producing enough electricity to power the equivalent of 1.3 million homes a year – or all of the homes in Greater Manchester.

The UK government is targeting 40 gigawatts of offshore wind capacity by 2030 and Orsted believes that Hornsea Two will be a “key project” if that aim is to be achieved.

The deal is expected to close in the second half of this year, after which Axa Investment Management and Crédit Agricole will each own 25 per cent of the project.

Orsted, which will run and maintain the wind farm for at least the first 20 years, will hold on to the other 50 per cent share of the project.

“Our investment strategy is all about decarbonisation, electrification and digitization,” Mark Gilligan, head of infrastructure equity at AXA IM Alts, said. “These are central to the energy transition. Hornsea Two allows us to play an important role in decarbonising and electrifying the United Kingdom. ”

Crédit Agricole Assurances has previously committed to doubling its investments in renewable energies by 2025, and buying a large slice of Hornsea Two was “fully in line with [its] climate commitments ”, said Philippe Dumont, its chief executive.

Orsted was previously known as Dong Energy and started life as Denmark’s state oil and natural gas company before switching to offshore wind development. It has since installed more than a quarter of the world’s offshore wind capacity and owns or co-owns 12 offshore wind farms in UK waters. The company remains 50.1 per cent owned by the Danish government.