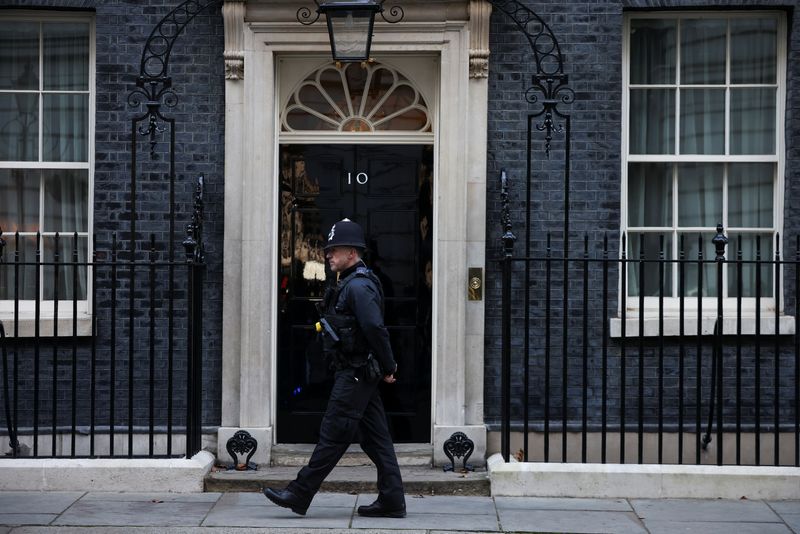 LONDON (Reuters) -British police said on Tuesday that 20 fines would be issued over gatherings in Boris Johnson’s offices and residence that broke coronavirus lockdown rules, sparking fresh opposition calls for the prime minister to resign.

Police are investigating 12 gatherings held at Downing Street and the Cabinet Office in 2020 and 2021 after an internal inquiry said Johnson’s staff enjoyed alcohol-fueled parties, with the British leader attending some of the events himself.

The police action confirmed for the first time that unprecedented regulations to protect the nation from COVID-19 were broken by officials at the heart of the government that designed them.

The issue threatened Johnson’s position earlier this year, when members of his own party began calling for him to quit and public trust in his leadership plummeted – although the focus on Ukraine has relieved some of the immediate pressure on him.

Revelations of the gatherings, many of which took place when people could not attend funerals or say farewell to loved ones dying in hospital due to lockdown rules, were first reported in late 2021.

At that time, Johnson said all the rules were followed, though he later apologized to parliament for attending one event, which he said he thought was work related, and then to Queen Elizabeth for another at which staff partied on the eve of her husband’s funeral .

Recipients of the fines will not be identified but Downing Street has previously said it will say if the prime minister receives one. Johnson’s office said he had not been notified that he was one of the 20 subject to fines.

“We will today initially begin to refer 20 fixed penalty notices to be issued for breaches of COVID-19 regulations,” the Metropolitan Police said in a statement.

Fixed penalty notices are issued to people deemed to have broken COVID-19 rules – as well as for some motoring offenses and anti-social behavior. The penalty for participating in a gathering of more than 15 people is an 800 pound ($ 1,050) fine.

“The culture is set from the very top. The buck stops with the prime minister, who spent months lying to the British public, which is why he has got to go.”

Johnson’s office said that once police had concluded their investigation, the full findings of an internal inquiry would be released, and the prime minister will make a further statement.

Polls show his ratings have improved from their lowest point.

YouGov data showed 30% of respondents thought Johnson was doing well, up from 22% in January, but below their average over the last two years and far off a peak of 66% seen in April 2020.