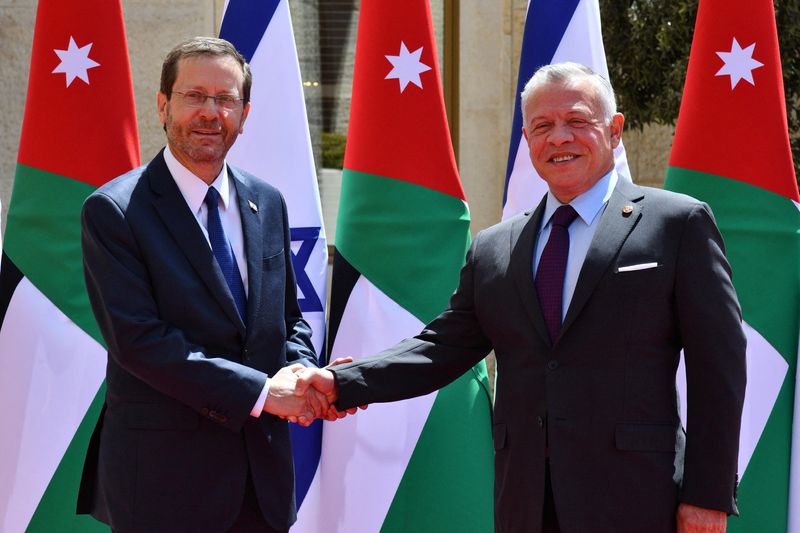 AMMAN (Reuters) – Jordan’s King Abdullah called for calm following a historic summit with Israeli President Isaac Herzog on Wednesday after the sharpest spike in street violence in years stoked fears of a wider escalation ahead of the holy Muslim month of Ramadan.

Abdullah told Herzog after receiving him at the Husseiniya Palace in the first official visit by an Israeli head of state that peace was more pressing now to end a conflict that he said had “lasted too long”.

A palace statement said the king condemned “violence in all its forms” including the latest attack on Tuesday in which an Arab gunman killed at least five people in a Tel Aviv suburb.

“This conflict has lasted for very long and the violence it has has resulted in continues to cause much pain and creates a fertile ground for extremism,” the monarch was quoted as saying in the statement.

The Israeli-Palestinian conflict, including Israel’s nearly 55-year-old occupation of the West Bank and East Jerusalem, has long weighed on relations between Israel and Jordan, who have been peace partners since 1994.

An Israeli statement said Abdullah offered Duke his condolences to the victims’ families amid fears in both countries of a surge in assaults in the run-up in April to the holy month of Ramadan.

“I always say, the fact that Muslim leaders are meeting together Jewish leaders and Israeli leaders is an alternative to the abyss of hatred and bloodshed,” Herzog was quoted as saying in a statement.

“As we enter these holy days … we must move towards enabling everyone to practice their beliefs in safety, in security, in calm circumstances. This is what we need to work towards, “Herzog added.

Israeli security forces were on high alert on Wednesday after the Tel Aviv shooting, the latest in a string of fatal attacks in the past week – the sharpest spike in attacks on city streets in years.

Both countries have engaged in a flurry of top-level diplomatic and security talks in recent days to reduce tensions that Jordan fears could spiral with repercussions in a kingdom where many of its citizens are of Palestinian origin.

Last year, clashes erupted between Israeli police and Palestinians around Jerusalem’s Al Aqsa mosque at the height of the Ramadan fasting month. The violence helped ignite an 11-day war in May between Gaza militants and Israel.

In his meeting with Herzog, Abdullah urged Israel to allow freedom of prayer to Muslim worshipers, an official, speaking on condition of anonymity, told Reuters. The king also asked that Israeli police stop provocations by Jewish worshipers in the Al Aqsa mosque compound.

Citing security concerns, Israel has imposed age limits on Muslim worshipers at Al-Aqsa during periods of tension and restricted Palestinian travel to Jerusalem from the West Bank, territory that it captured, along with the eastern part of the holy city, in a 1967 war .

Jerusalem is a particularly sensitive issue for Jordan’s royal Hashemite family, which has custodianship of Muslim and Christian holy sites in the eastern part of the city, an area controlled by Jordanian forces from 1949 to 1967.