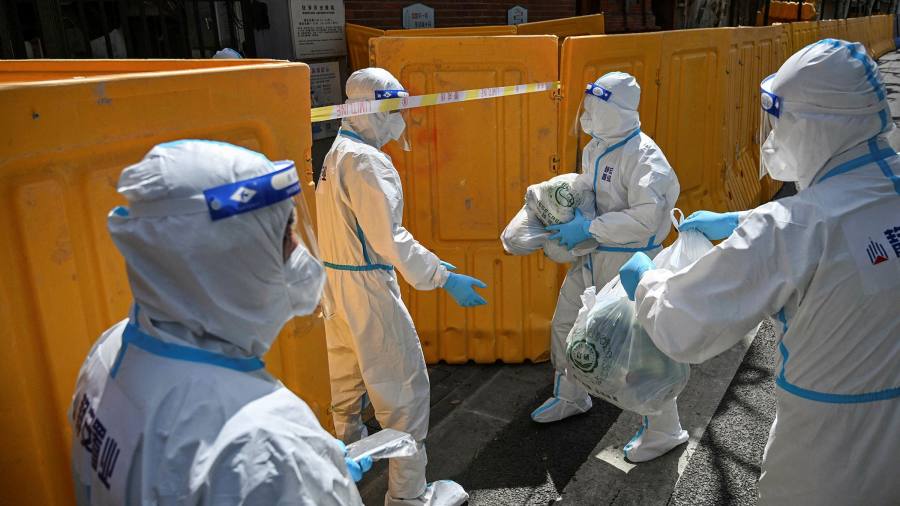 Shanghai’s growing coronavirus outbreak has disrupted life across the Chinese financial hub as bankers bed down in their offices, delivery services struggle to cope with demand and food prices soar.

Local authorities gave businesses and 9mn residents in the eastern Pudong half of the city, which includes its main financial district, only about eight hours’ notice before locking it down from 5am on Monday morning for four full days.

On the opposite side of the Huangpu river, which bisects the city north to south, the Puxi area and about 16mn people will be locked down from April 1 to April 5.

In a pre-lockdown rush on Sunday night, some Pudong-based financial institutions and businesses urged employees to dash to the office to staff “closed-door” operations, inspired in part by the “Beijing bubble” in which the Winter Olympics were successfully held last month.

“More than 30 colleagues in trading, settlement and technology departments were summoned on Sunday evening,” said Alex Wang, a forex trader who asked that his Pudong-based bank not be named.

“The company has set up camp beds in the office and there is also plenty of food in the refrigerator. But I brought in a dozen cups of instant noodles just in case, ”Wang said.

While many of his colleagues opted to work from home instead, Wang was happy to pocket the Rmb1,000 ($ 157) daily bonus his bank is paying members of its on-site team.

“We need people in the office to maintain systems and I am single,” he said. “Our trading business is continuing as normal, but lending and investment banking operations, which require a lot of in-person meetings, will be seriously affected.”

Shanghai on Tuesday reported that a record 4,477 Covid-19 cases had been discovered the previous day, more than any other Chinese city during the pandemic except for Hong Kong. The vast majority of the cases, 4,381, were classified as asymptomatic.

During the lockdowns residents will be subject to compulsory testing and, if positive, confined to centralized quarantine facilities.

“Shanghai is currently at the most critical stage of virus prevention,” Wu Qianyu, an official at the city’s health commission, told a briefing on Tuesday.

Local officials have said the alternate lockdowns of the city’s eastern and western halves were necessary to preserve President Xi Jinping’s controversial, but largely successful, “zero-covid” approach to controlling the pandemic.

The strategy has failed only in Hong Kong, where deaths rose significantly this month, especially among elderly patients. Chinese officials fear a far greater calamity could befall the rest of the country if Shanghai and other regions’ outbreaks are not brought under control.

In Pudong, many residents are having trouble ensuring a steady supply of groceries from resource-stretched delivery services. Vegetable prices tripled on Tuesday, prompting panic buying in Puxi, which includes Shanghai’s historic center and the famous Bund waterfront.

Olivia Li, a consultant who lives in Pudong, said she failed for a second day running on Tuesday to secure fresh food from online stores, which sold out by 6.30am. “Tomorrow I’m going to start placing orders at 6am,” said Li.

Unlike the more targeted lockdowns over the past two years, when Shanghai residents in temporarily quarantined areas could stroll around their gated communities or venture to neighborhood stores, people have been banned from leaving their apartments.

In a residential compound in Pudong’s Zhoupu township, an automated loudspeaker on Tuesday warned residents venturing outside that they were “violating pandemic prevention rules” and would face legal consequences if they did not go home immediately.

A notice from Zhoupu neighborhood officials, seen by the Financial Times, added that drones would be used to record anyone breaching lockdown rules. In another area, officials strapped a loud hailer playing recorded warnings to a four-legged robot.

Such zealous enforcement has prompted occasional confrontations between residents and local authorities, especially in areas caught in smaller lockdowns well before the citywide restrictions were announced.

Last week, residents protested at the gate of a compound in Puxi’s Longbai Liu’can neighborhood after being grounded for more than a week. A video of the confrontation showed residents erupting when an official asked them to “remain calm”. 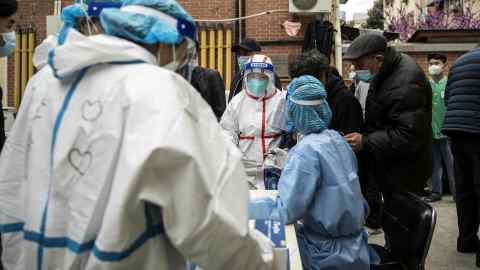 “How can we remain calm after nine days’ quarantine without enough food?” a woman shot back.

“People get fed up with zero-covid when its costs start to outweigh benefits,” said a Shanghai-based government adviser, referring to Beijing’s efforts to eliminate the disease at all costs. According to a Bloomberg report, lockdowns were costing China at least $ 46bn a month.

In Puxi, where residents still had two days to prepare for the start of their four-day lockdown at 3am on Friday, grocery stores were hiking prices, citing inadequate transportation capacity and other constraints.

In Puxi’s Baoshan district, stores were charging as much as Rmb16 for one kilogram of cabbage on Tuesday, compared to Rmb4 a month ago, even though the Shanghai government has pledged to keep food prices stable.

Wang Dai’nian, owner of a vegetable stand in Baoshan, said he had erred in not building up a bigger inventory because he believed government assurances that supplies would be plentiful.

“There is nowhere to purchase vegetables,” Wang complained, referring to the closure of multiple wholesale fresh food markets across the city.

Anxiety about supply has sparked panic buying, which could in turn spread the virus even further. Wang Guili, a retired accountant in Puxi’s Huangpu district, said she walked out of a grocery store empty-handed on Tuesday when hundreds of people surged inside.

She returned home and ordered her groceries online – paying prices double the store’s. “If anyone in the store has the virus, all customers will be in danger,” Wang said.