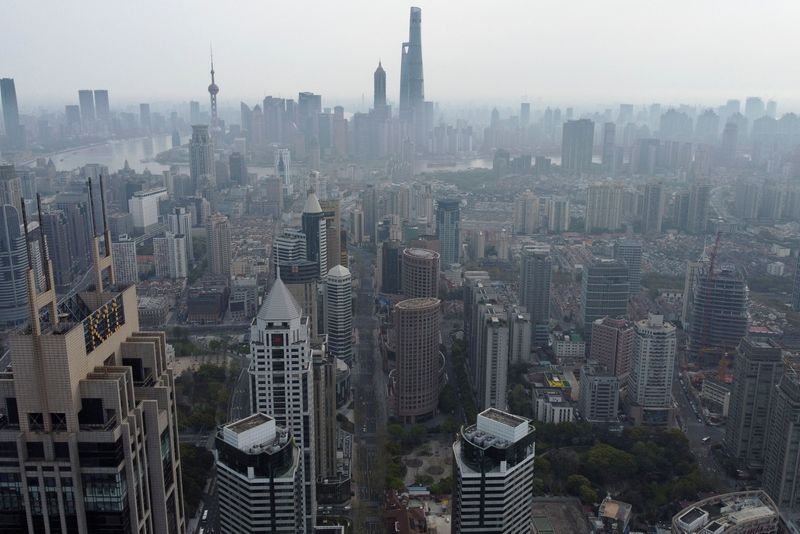 © Reuters. FILE PHOTO: An aerial view shows the Lujiazui financial district and other buildings along the Huangpu river amid a lockdown to contain the spread of coronavirus disease (COVID-19) in Shanghai, China March 30, 2022. REUTERS / Aly Song


SHANGHAI (Reuters) -More than half of US multinational companies in China have reduced their annual revenue projections, mostly due to the recent COVID-19 outbreak in Shanghai, according to a joint survey by the American Chambers of Commerce in Shanghai and Beijing published on Friday.

Responses to the survey, conducted with 167 companies operating throughout China including 76 in manufacturing, found 82% of manufacturers reported slowed or reduced production due to a lack of employees, inability to obtain supplies, or government-ordered lockdowns.

More than half, or 54%, have cut 2022 revenue projections following the outbreak, though 38% said it was too early to estimate the impact.

Some manufacturers in Shanghai, particularly in the automotive industry, have resorted to operating with a “closed-loop”, where employees remain confined to the premises in order to keep production lines running, while outside suppliers are sealed off.[L2N2VW0U0[[L2N2VW0U0[

Eric Zheng, president of the American Chamber of Commerce in Shanghai, said that such arrangements are acceptable for a few days but “not sustainable” long term.

“Even if your employees are within the factory bubble, your trucks have to come and go sending inputs and outputs, but that’s not possible,” said Zheng.

“I hope this is only a temporary, drastic measure to stop the spread.”

Shanghai has been battling its largest outbreak for nearly a month and this week most of the city of 26 million people was put under lockdown as cases continued to surge.

Authorities have implemented the lockdown in two phases, first targeting the eastern part of the city, followed by the west.

AmCham said that only half of the respondents were satisfied with China’s pandemic efforts, and 77% had expressed dissatisfaction with the length of quarantines.

East Money Information Co said it was highly uncertain if its annual shareholder meeting can be held at its Shanghai headquarters on April 8, and is suggesting shareholders participate online. Shanghai Shizhong Intelligent Parking Corp. said the lockdown has forced it to halt parking services, directly hitting performance.