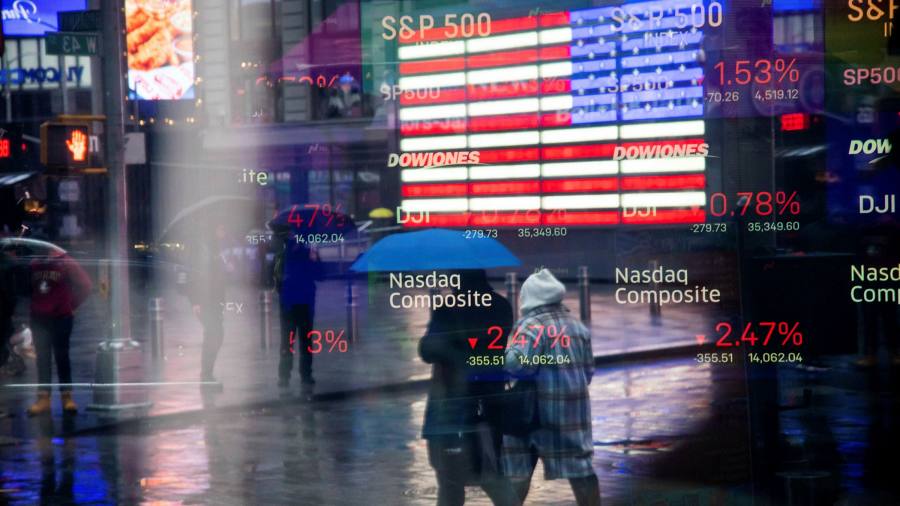 Investors in private markets have flipped their view on the valuation of companies that were in vogue just a few months ago, mirroring a pullback in listed technology stocks.

At the end of last year, 70 per cent of so-called growth investors – in between early stage venture capital funds and private equity investors that target mature companies – said they expected valuations to hold steady or rise, according to a survey of the top 25 investors in the field by Numis.

Now, 95 per cent of investors anticipate offering lower valuations in the coming 12 months – an abrupt shift for the fastest-growing corner of the private capital industry.

“Investors are saying that their expectation is that both absolute valuations and multiples will come down this year after a pretty extraordinary two or three years of capital markets activity,” said Alex Ham, co-chief executive officer of Numis.

The pullback reflects a sell-off in listed technology companies that had prospered in the pandemic and an uncertain wider market environment resulting from the war in Ukraine. The technology-heavy Nasdaq Composite index dropped more than a fifth between its recent high in November and mid-March, on concerns about inflation and the anticipation of rising interest rates. The Nasdaq has subsequently rebounded and is now down around 10 per cent since November.

High-growth tech stocks are seen as particularly sensitive to rising interest rates and policy tightening that crimp future earnings potential, which has knocked the sector’s high valuations and is set to have a knock-on effect on the valuations of privately held companies.

Growth investing has seen a large influx of capital in recent years as investors have searched for yield away from lackluster returns in public markets and companies have stayed private for longer. Meanwhile groups like Chase Coleman’s Tiger Global have shaken up the venture capital industry through the sheer volume and velocity at which it puts money to work.

This year, Court said he expects to see “fewer rounds announced compared to last year and investors will be much more selective”. This compares to a frenetic pace of action last year, when “companies were raising growth rounds simply because they could – it was triggered less by demand from entrepreneurs and more by the supply of capital.”

The average size of growth rounds is also decreasing. “The biggest trend we’re seeing in growth investing is the decline of the outsized mega round, which means that the average round size is declining,” said Lo Toney, founding managing partner of Plexo Capital, a San Francisco-based venture capital firm . “Too many companies were able to raise money at valuations that did not make sense.”

However Toney said that it may take some time for the sell-off in listed tech companies to trickle down to the private markets, notably because many companies raised enough money last year that they do not need to go out and do another round for a while. “If you raised a big round in the third or fourth quarter of 2021 you do not need to test the market again until 2023.”

Another factor that could temper private market valuations this year is a cooling market for exits, notably initial public offerings. Digital bank Chime is delaying its IPO, originally slated for March, until the second half of the year. And Justworks, a business software company, has also delayed its IPO, citing market conditions.

Despite an anticipated pullback in valuations, two-thirds of the growth investors surveyed by Numis said that they expect to make a similar number of new investments in the next 12 months.

Numis’s Ham said investors’ fear of missing out on hot opportunities will ease back this year. “But over the long term this theme of companies staying private for longer will continue,” he said. The growth of private markets remains a “very clear long-term structural trend,” he added.