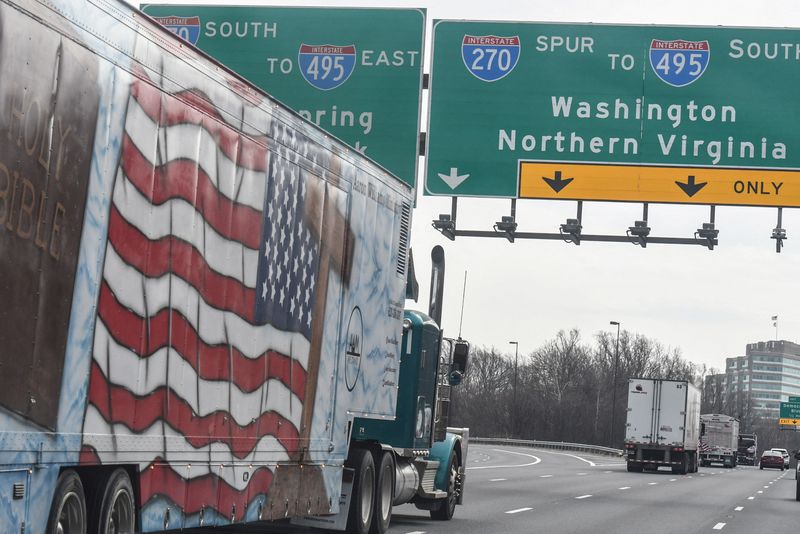 © Reuters. FILE PHOTO: Vehicles, including 18-wheeler trucks, RVs and other cars drive towards Washington, DC, after some of them arrived as part of a convoy that traveled across the country, to protest coronavirus disease (COVID-19) related mandates and other iss

HAGERSTOWN, Maryland (Reuters) – Melanie Disporto said she lost her job at a Tennessee psychiatric facility when she refused to wear a mask or take the COVID-19 vaccine.

A week later, in early March, inspired by YouTube videos of truck drivers who were heading to Washington to protest COVID-19 mandates, she and her husband packed their Honda and joined them, camping out for weeks in a tent on the grounds of the Hagerstown Speedway in western Maryland.

On Friday, as all but a few remnants of the so-called “People’s Convoy” departed the area, some heading to California to continue the protest, it is unclear what the coalition of drivers accomplished in Washington beyond intensifying occasional traffic jams on its notoriously crowded Capitol Beltway interstate highway.

The group did not achieve its stated goal: overturning the federal emergency declaration for the COVID pandemic, first put in place by former President Donald Trump in March 2020 and extended twice by President Joe Biden. And no mask mandates were changed, for instance, as a direct result of the protest, which coincided with an easing of COVID measures around the country as the rate of the virus’ spread in the United States slowed.

But experts on right-wing movements say the convoy of pickups, SUVs and tractor trailers gave momentum to a fast-growing universe of alternative conservative media, led by live-streamers and podcasters seeking to raise money and build followings. Others used the convoy to pull in viewers to channels sharing government conspiracy theories and false information on vaccines.

Not long after the protesting truckers arrived on March 4 in Hagerstown, about an hour-and-a-half drive to Washington, the crowd inside the racetrack grounds began to reflect a much wider array of right-wing grievances and causes than vaccine mandates and wearing surgical masks.

Disporto, 40, and others protesting the mandates mingled with members of white nationalist groups like the Proud Boys, along with hardcore Trump supporters who boasted of their role in the Jan. 6 Capitol insurrection. Some flew the Confederate flag or ones that read: “Fuck Biden.” Supporters of QAnon conspiracy theories, which cast Trump as a savior figure and elite Democrats as a cabal of Satanist pedophiles and cannibals, camped beside people urging the citizen’s arrests of Biden and the top US infectious disease expert, Dr. Anthony Fauci.

Many expressed belief in a theory that COVID mandates – and attempts to crack down on disinformation – are the first steps in a plot from “globalists” to impose a tyrannical government.

In the protest, Disporto and her husband Paul said they found a community of fellow believers with a common cause: pushing back at mandates they believe are stealing their freedom –and their jobs.

“I actually loved that job, and I was good at it,” Disporto said, pulling her jacket close against a blustery wind at the convoy’s campsite. “This is America – I should be able to work a job that I love.”

When the convoy left for California, they went along.

‘HARD TO KNOW WHO TO BELIEVE’

An offshoot of a truckers’ protest in Canada, the convoy set up a makeshift camp at the racetrack after traveling cross-county. Leaders addressed the crowd from a trailer-bed and organized daily rides into Washington, 70 miles to the south.

Over time, the number of participants dwindled, but the convoy is not dead, its organizers said. About 100 vehicles are now heading back to California for an April 10 protest in Los Angeles against a series of proposals aimed at containing the pandemic. On Friday, the caravan traveled from North Carolina to another racetrack campground site in Greenbrier (NYSE :), Tennessee.

“A lot of people felt like we abandoned our mission in DC, and we’re not. We’re coming back, ”said Mike Landis, co-organizer of the protest, in an interview on Friday. “We’re chipping away at it.”

The protest illustrates the rise of an alternative media system populated by live streamers and right-wing commentators.

While traditional media portrayed the convoy largely as traffic-snarling protests with a vague agenda, right-wing outlets cast it as a rallying point for Americans convinced that media and government are lying to them about COVID-19, the vaccines and the results of the 2020 election – and angry about tech companies that scrub such opinions as disinformation.

Kecia Pettey, of Annapolis, Maryland, said she lost her 30-year career as a flight attendant over her refusal to wear a mask.

Wearing a pink “Trump 2024” hat, she had a sign next to her Jeep showing Fauci with a Hitler mustache. Convinced Trump really won the 2020 election, she says she gets news from right-wing streamers, along with Newsmax and One America News – networks that have provided platforms for vaccine skeptics and false theories that Trump really won the election.

“It’s hard to know who to believe,” she said of mainstream sources.

Caroline Orr Bueno, a researcher at the University of Maryland who studies right-wing movements, said the convoy’s lack of success thus far on policy goals has not dampened the fervor of its online supporters, who have long ago quit paying attention to mainstream news coverage.

“They feel their voices are being suppressed and the media is ignoring them,” she said. “It feeds into that sense of grievance that fuels a lot of what they’re doing.”

Since it began, the convoy has also spawned its own media system: nearly two dozen live streamers embedded with the protest, documenting morning meetings, speeches and the often mundane daily life at the campground, while asking their supporters for donations. At least a dozen are still with the convoy, on the trip to California. One trucker, Stan Sasnak, has 127,000 YouTube subscribers.

“To me, that’s my media,” said Chuck Jones, of Indianapolis, as his wife Jennifer grilled hot dogs over a wood fire in Hagerstown, saying he has been watching videos and livestreams of the protest since it started in Canada. “You show me live footage, I’m a believer. Then I know you’re not telling me a story. “

Brian Brase, another co-organizer of the convoy, said the role of the live-streamers in their movement now is “massive.” “They’re the ones showing the actual story,” he said in an interview. “People are only going to pay attention to the livestreamers going forward.”

He said the convoy plans to return to the Washington area and has no intention of stopping anytime soon.

“It’s no longer a protest. It’s a movement at this point, ”he said.