On a recent Friday afternoon in Sydney Harbor, travelers queued up to roar around in high-speed jet boats and see the sights on sedate ferries. Others jostled for prime selfie position in front of the Opera House’s famous sails. Across the water, tiny figures climbed the iconic Harbor Bridge under the careful supervision of BridgeClimb guides, a tour operator that takes adrenaline junkies to survey the city from 134 meters (440 feet) above the water.

For a formerly bustling neighborhood that’s resembled a ghost town for much of the past two years, it was a welcome sight for many in the city’s main tourism district — made possible by Australia’s decision, in late February, to throw off the shackles of “Fortress Australia ”and reopen international tourism.

Throughout the pandemic, Australia maintained some of the tightest restrictions in the world on both tourism and daily life, limiting interstate travel, the ability for citizens to return home amid the crisis, and more. At times, even singing and dancing were ruled out. That level of caution makes it especially notable that now, anyone can visit the country, regardless of where they are coming from. The only requirements are that they be fully vaccinated and have a negative Covid test within three days of arrival, rules that are expected to be relaxed further in mid-April.

Visitors to Sydney today will find a city where few Covid protocols remain, other than masks being required on public transport. Restaurants, bars, nightclubs, theaters, and sporting events are open to all. With international tourists adding to cooped-up Sydneysiders, it makes sense to book as early as possible. For anyone looking for a clear sign the city is getting back to normal, look no further than the return of Vivid Sydney from May 27 to June 18. In 2019 the three-week festival of lights, concerts, and ideas attracted 2.4 million visitors. For this edition, dazzling light installations will illuminate the Opera House with Indigenous art, and 48 jet cannons will blast streams of water 80 meters into the air, while an 8-kilometer (5-mile) light walk will snake around the harbor. A bumper program of concerts and talks will be headlined by pop sensation Troye Sivan and West Wing writer Aaron Sorkin, respectively.

There’s still some trepidation, with daily cases hovering around 20 000. Although down from the peak of around 35 000 daily cases in early January, which ruined summer holiday plans, the tally has ticked up from 5 000 to 7 000 a day posted in late February. But with one of the world’s highest vaccination rates — 95% of people age 16 or over in New South Wales are fully vaccinated — the state government has made it clear it’s not going to reimpose restrictions.

As Sydney’s municipal government puts it: “Your city’s waiting for you.” Here’s what visitors can find.

The pandemic brought the closure of several notable institutions, including Chinatown stalwarts Golden Century and Marigold, but most of Sydney’s restaurateurs weathered two years of lockdowns and in-person dining restrictions by pivoting to takeaway and home delivery, sometimes ferrying the food themselves.

Now, with all curbs lifted, the city’s dining scene is bouncing back. Among the slew of high-profile openings is the notable Oncore by Clare Smyth, where the award-winning chef uses native ingredients to add a local twist to the British comfort food of her three-Michelin-starred London restaurant. Set aside at least three hours for the seven-course degustation, going for A $ 300 ($ 225), where the humble potato stars in the signature dish: slow-cooked for 9½ hours, topped with smoked trout and herring roe, and served with a rich kombu butter.

In the Central Business District, the dated 1970s Menzies Hotel has been transformed into the luxury bar and restaurant complex Shell House. Drop in for cocktails and shared plates – oysters with yuzu and pepper mignonette (A $ 8 each) or yellowtail crudo with cucumber, smoked pil pil, wasabi, and caviar (A $ 26) —at the ground floor Menzies Bar. For a blow-out dinner, hit the Dining Room & Terrace. Start with a dozen Sydney rock oysters with finger lime and verjus mignonette (A $ 78) followed by the 500-gram dry-aged sirloin (A $ 105) from the Rangers Valley in the New South Wales northern tablelands. Finish with a nightcap at the art deco Clocktower Bar, housed inside the restored and fully operating 400-tonne clocktower, or the open-air Sky Bar.

At subterranean Restaurant Hubert in the heart of the CBD, live jazz is back for lunch and dinner — it’s one of the only restaurants in Sydney with a stage for performers, making it locally beloved among diners and its rotating cast of musicians. The menu of French bistro classics includes escargots in XO butter (A $ 29) and whole chicken with bread sauce (A $ 89). There’s also a 60-seat cinema for Magnums & Movie nights, which are held every other Monday and include canapés, a buffet dinner, and unlimited wine for A $ 165.

For a more casual night out, head to the inner-city suburb of Newtown and its range of pubs, small bars, craft breweries, cutting-edge food, and vibrant LGBTQ scene. Sydney’s reopening has seen Newtown restaurateurs flex their tattooed muscles with uber-cool venues that are fast earning the approval of the area’s resident hipsters. Odd Culture, which opens at 7 am for a boozy brunch, exudes an oh-so-casual vibe but dishes up a refined selection of French-Japanese fusion. Think hiramasa kingfish with smoked chicken fat mayo and saltbush (A $ 26), or bavette steak with burnt garlic and egg yolk sauce (A $ 48). The hefty wine and beer list celebrates natural fermentation methods, and the location is just a short stroll (about five to eight minutes) from longtime live music hangout the Vanguardwhere you can catch a burlesque show or the city’s hottest indie bands.

Sydney is simultaneously a dense metropolis and an outdoorsy paradise, offering options for everyone — regardless of their current level of cautiousness.

If you’re still Covid-wary: Sydney is renowned for its natural beauty, and there’s no better way to enjoy that than from aboard a harbor ferry. Take a ride past the Opera House and historic Fort Denison to Taronga Zoo. There’s plenty of room to remain socially distanced while roaming the enclosures that house more than 4,000 animals, including endangered Sumatran Tigers and unique native wildlife such as the platypus and kangaroos. For the full experience, stay the night at the 62-room Wildlife Retreat in the middle of the zoo (rates from A $ 555 per night). Packages include a three-course dinner overlooking the shimmering lights of the city skyline and the chance to get up close and personal with wallabies and koalas in the surrounding bushland sanctuary.

If you need a gentle reentry: Sleep under the stars in the middle of Sydney Harbor. Cockatoo Island — known as “Wareamah” in the Dharug language of the Eora people, who are the Indigenous owners of the surrounding area — is rich in history. It was used as a penal establishment during the early years of British settlement, when convicts were sentenced to backbreaking manual labor at a time the snake-infested outcrop had no water supply. It became a major Pacific naval base during World War II.

But the grim conditions prisoners endured in the 19th century are a far cry from the Unesco World Heritage site’s modern offerings. Today the 18-hectare island hosts ghost tours for those keen to learn about its dark past and convict legacy, as well as art exhibitions and pop-up bars. After a day spent exploring, watch the sun set over the harbor, then bed down for the night at the island’s campground, where options range from BYO tent to deluxe waterfront glamping. Later this year, Georges Bizet’s Carmen will be performed in the island’s old industrial area, but opera lovers can also moor their boat and watch the performance projected onto a big screen.

If you want to pretend the pandemic never happened: After playing in front of mostly empty stadiums or being forced to go on the road for much of last year, Sydney’s two main football codes are back in front of fans. Catch the Sydney Swans and their superstar forward Buddy Franklin in the fast-paced, 18-a-side Australian Rules football at the iconic 48,000-seat Sydney Cricket Ground. In the National Rugby League, multiple games are played weekly at the cavernous 80,000-seat Accor Stadium or at suburban grounds, where you can stand with die-hard fans knocking back beers and meat pies.

If sports aren’t your thing, live theater is also back in full swing. Highlights include the Sydney Theater Company’s acclaimed one-woman show The Picture of Dorian Gray at the Roslyn Packer Theater from March 28 to May 7. There’s also the Dolly Parton-inspired musical 9 to 5 at the Capitol Theater until May 8, starring Australian Idol winner Casey Donovan and Eddie Perfect, the songwriter behind Broadway musicals King Kong spirit Beetlejuice. Masks are still mandatory on public transport, including taxis and ride-share services, as well as on planes and at airports. The biggest hassle is the regular breakdowns and service disruptions that plague the city’s creaking train network, so it’s always safe to build in some extra time. And though capacity caps have been removed, people still aren’t back in the habit of sitting next to strangers, so spread out. 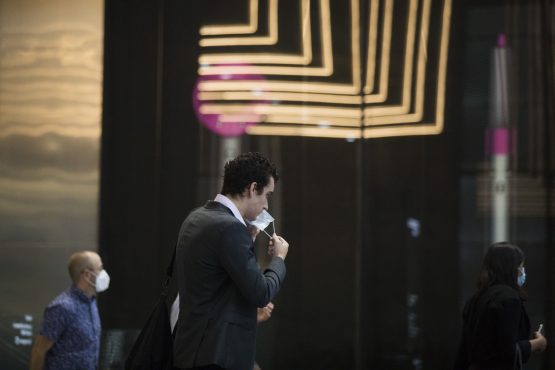 Masking up before getting on the train in Sydney. Photographer: Brent Lewin / Bloomberg

Although almost all restrictions have been lifted, some remnants of pandemic behavior have stuck. Masks continue to be commonplace in shops and malls, as are hand-sanitizer dispensers. Coughing in public can still attract dirty looks, and people remain respectful of private space when possible, so do not stand too close. Other than that, Sydney is ready to get down like its 2019.