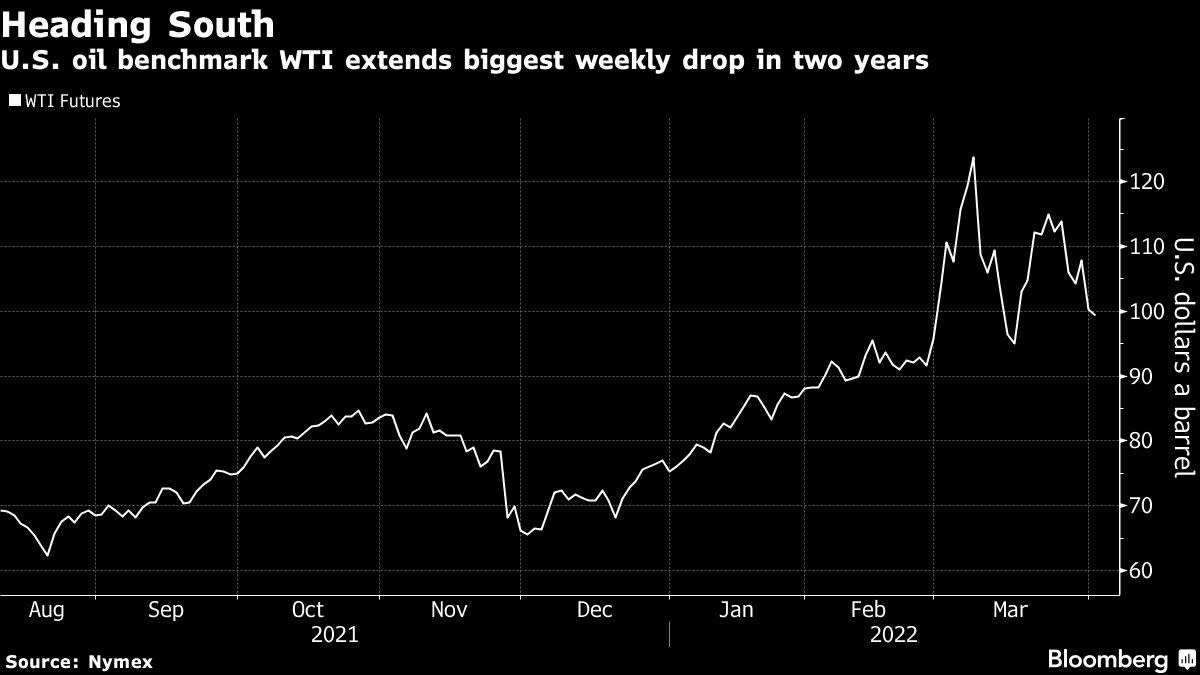 (Bloomberg) – Oil fell as traders tracked a Covid-19 outbreak in China and prospects for additional crude releases from government stockpiles.

West Texas Intermediate dropped below $ 99 a barrel after collapsing 13% last week. China is grappling with a renewed coronavirus outbreak that is harming crude demand in the key importer. Shanghai’s 25 million residents are almost all under some form of lockdown as the country added more than 13,000 daily infections, with state media reporting a case infected with a new subtype.

The US benchmark sank the most in two years last week after the Biden administration announced a massive release of crude from strategic reserves to combat energy prices that have been buoyed by Russia’s invasion of Ukraine. Allies within the International Energy Agency will also tap stockpiles, with details expected this week. After the US move, Goldman Sachs Group Inc. pared price forecasts while remaining broadly positive on oil’s outlook.

“It looks like the US SPR move broke crude’s rally,” said Vandana Hari, founder of Vanda Insights in Singapore. “A bit of relief on the supply front naturally makes room for the market to take in demand worries on the back of continuing outbreaks and lockdowns in China.”

Traders were also tracking stop-start talks to restore a 2015 nuclear agreement with Iran after Tehran said it’s close to reaching an agreement with the US If concluded, a pact may boost official Iranian crude exports.

In addition, although the Organization of Petroleum Exporting Countries and its allies including Russia have been easing curbs on output imposed during the pandemic, some producers have been unable to meet their quotas in full.

Investors will get a clearer insight into the perspective of OPEC + heavyweight Saudi Arabia in the coming days when Saudi Aramco releases official selling prices for May-loading cargoes. A Bloomberg survey of traders and refiners suggested pricing of its key Arab Light grade to Asia may rise to a record as some buyers seek alternatives to Russian crude because of the war.

Oil markets remain in backwardation, a bullish pattern, although differentials have narrowed. Brent’s prompt spread – the gap between its two nearest contracts – was $ 1.52 a barrel in backwardation, from $ 2.99 a week ago.

While prices have eased, leading players remain wary. Vitol Group, the biggest independent crude trader, said at the weekend that prices had fallen to levels that did not reflect risks including disruptions to Russian exports.