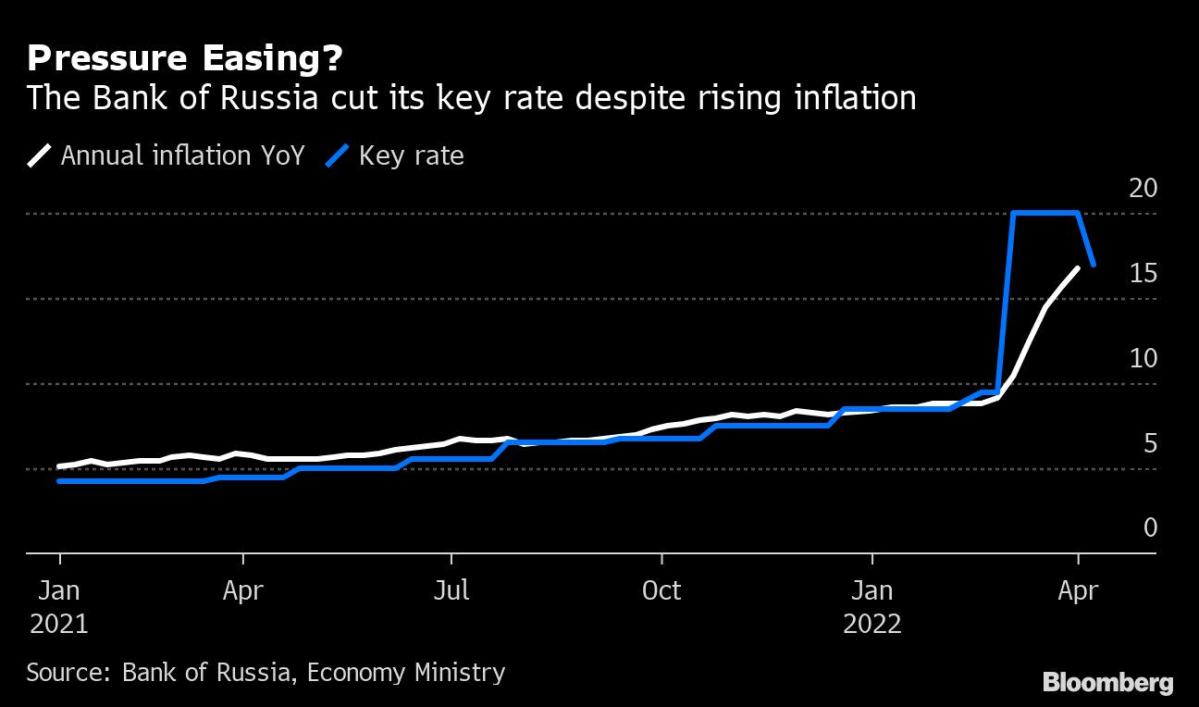 (Bloomberg) – Russia’s central bank unexpectedly cut its key interest rate the most in nearly two decades, offering relief to the recession-bound economy in a sign of confidence it can start to reverse some of the steep monetary tightening delivered after the invasion of Ukraine.

The central bank lowered the rate to 17% from 20% at an unscheduled meeding on Friday and said further cuts could be made in the months ahead if conditions permit. The ruble briefly halted its rebound against the dollar and local bond yields tumbled after the decision.

“The central bank wants to be a locomotive of the economic rebound, not a brake,” said Luis Saenz, head of international distribution at Sinara.

Sweeping international sanctions have touched off inflation and put the world’s biggest energy exporter on track for a deep, two-year recession while pushing the Russian government to the edge of default.

But continuing inflows of energy revenues and tough capital controls – including a ban on foreigners selling Russian assets as well as mandated hard currency sales by exporters – have helped the ruble regain ground.

“External conditions for the Russian economy are still challenging, considerably constraining economic activity,” the central bank said in a statement. “Financial stability risks are still present, but have ceased to increase for the time being, including owing to the adopted capital control measures.”

It’s a policy pivot that echoes Governor Elvira Nabiullina’s surprise 200 basis-point rate cut in 2015, which reversed an emergency hike made weeks earlier. At the time, Russia was entering an economic contraction following the first round of sanctions over Ukraine and the collapse in oil prices.

Yields on government ruble bonds tumbled 83 basis points to 11.19% as of 1:31 pm in Moscow on Friday. Russia’s currency briefly erased gains after the rate cut, before resuming its advance and trading 0.7% stronger at 75.2250 per dollar.

The currency on Wednesday advanced past 81.16 in Moscow trading, the level it closed at on Feb. 23 – the day before President Vladimir Putin launched his attack.

“The ruble is very strong,” said Natalia Orlova, an economist at Alfa-Bank. “This reduces the horizon of inflation risks.”

Nabiullina acted three weeks before a scheduled rate meeting, as pressure builds against Russia in response to reports that the country’s forces committed apparent war crimes in Ukraine. On Friday, Japan announced it will ban imports of Russian coal, a day after a similar decision by the European Union.

The Group of Seven leaders issued a statement saying that the countries will ban new investment into Russia’s energy sector and expand trade restrictions, including phasing out and banning coal imports.

Still, weekly inflation has shown signs of easing, a slowdown the central bank said can in part be attributed to a stronger ruble.

The Bank of Russia’s emergency rate hike in February and restrictions on foreign-exchange transactions were sufficient to lower risks for the financial system, according to Sova Capital economist Artem Zaigrin. It’s now having to react quickly to an unfolding crisis, he said.

“Thanks to these actions, the central bank was able to stop the outflow of funds from the banking system and restore the attractiveness of deposits,” he said. “At the moment, the growing level of uncertainty in the economy and the sharp decline in demand have become prevalent.”

(Bloomberg) – Russia’s central bank unexpectedly cut its key interest rate the most in nearly two decades, offering relief to the recession-bound economy in a sign of confidence it can start to reverse some of the steep monetary tightening delivered after the invasion of Ukraine. Most Read from Bloomberg The central bank lowered the rate…

RBI’s policy normalization gets a leg up, say analysts