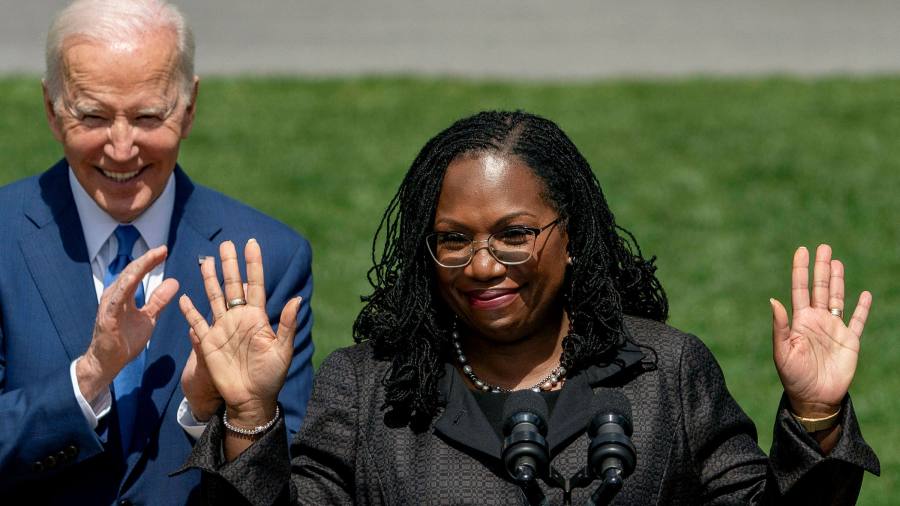 Joe Biden adjusted his aviator sunglasses, slowly put his hands in his pockets, then pulled them out to clap as Ketanji Brown-Jackson delivered the defining words of the celebration for her rise to the Supreme Court.

“I am the dream and the hope of the slave,” the 51-year-old judge said on Friday, quoting the late black poet Maya Angelou on the South Lawn of the White House.

“We have come a long way toward perfecting our union,” she added, her voice cracking with emotion. “In my family, it took just one generation to go from segregation to the Supreme Court of the United States.”

Brown-Jackson was speaking as the first black woman to be confirmed to highest level of the judiciary in America’s 233-year history. The US Senate backed her nomination on Thursday with the support of all 50 Democratic senators plus three Republicans who bucked their party’s opposition; she will take her seat after justice Stephen Breyer retires later this year.

Delivering such a milestone was a major accomplishment for Biden – something he had promised since his presidential campaign against Donald Trump. It also offered a much-needed ray of political sunlight a time when his presidency remains dogged by unshakeably low approval ratings, the weight of managing the western response to the war in Ukraine, and his frustration with high inflation undercutting the US’s economic recovery.

“It was an uplifting moment for everyone involved,” said Ben LaBolt, a former spokesman for Barack Obama who was brought in as an adviser to the White House for Brown-Jackson’s confirmation. “[Biden] prepared a long time for this day to come and ran a very deliberate, careful process with a very experienced team. And that’s how history is made ”.

Biden stepped up to the presidential podium at the end of another rocky week in Washington. Multiple cabinet members and top officials tested positive for Covid-19, a sign of the persistence of the pandemic, while grim details of the gruesome attacks on Ukrainian civilians by Russian forces dominated international headlines.

The US president has been on the defensive about his domestic record for months. Critics have blasted his initial $ 1.9tn stimulus plan for overheating the economy, and while he enacted a $ 1.2tn bipartisan infrastructure plan last year, other legislative dreams dear to his party – from voting rights protections to tax increases on the wealthy – are in tatters.

The US president specifically hailed Brown-Jackson’s “character and integrity” in the six weeks since she was formally picked, after enduring relentless attacks from Republicans.

“I knew the person I nominated would be put through a painful and difficult confirmation process. But I have to tell you, what Judge Jackson was put through was well beyond that, ”Biden said. “It was verbal abuse, the anger, the constant interruptions, the most vile, baseless assertions and accusations.”

In an ideal world for Democrats, her confirmation could help energize the progressive base ahead of very challenging midterm elections later this year, in which Biden’s party is expected to lose its thinly-held control of Congress.

In addition, the effectiveness with which the White House and Senate Democrats clinched Brown-Jackson’s confirmation over the past weeks could also offer hope for Biden’s administration after infighting and turmoil sunk key pillars of his economic agenda in the second half of 2021.

Biden made a point of thanking Chuck Schumer and Dick Durbin, the top two Senate Democrats, for spearheading Brown-Jackson’s confirmation, as well as Susan Collins, Lisa Murkowski and Mitt Romney, the three Republicans who crossed the aisle and voted for Brown-Jackson .

“I truly admire the respect, diligence, and hard work they demonstrated in the course of the process,” he said.

But for Biden and his top officials, there was a sense of relief that regardless of what happens to their legislative agenda, they had at least put a lasting stamp on America’s government with this groundbreaking lifetime appointment.

Joe Biden adjusted his aviator sunglasses, slowly put his hands in his pockets, then pulled them out to clap as Ketanji Brown-Jackson delivered the defining words of the celebration for her rise to the Supreme Court. “I am the dream and the hope of the slave,” the 51-year-old judge said on Friday, quoting the late…