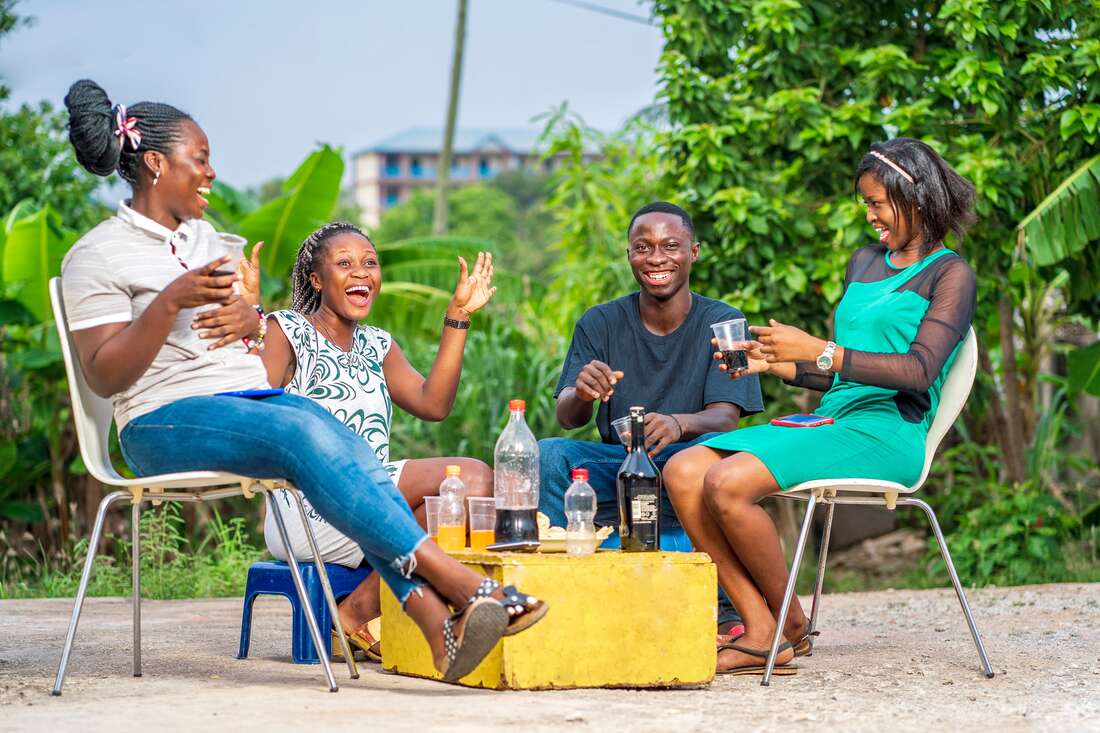 If some habits die hard, new ones can equally be stubborn. Some catch on fast and hang around longer to become part of our lifestyle.

From ordering alcohol online to drinking at home and roadside parties, restrictions that came with the Covid-19 pandemic disrupted and changed how Kenyans grooved. Revellers took on new habits as old ones were cast out the window.

Meanwhile, skeptics dismissed the new style of partying as a flash in the pan –they would flicker out as soon as the lockdown was lifted.

A year later, and with full resumption of social and economic activities, some of these practices have refused to go away. They are here to stay, as BD Life found out.

To respond to the changing landscape of partying, some companies have had to develop new and convenient business models to meet changing consumer behavior.

Beverage maker Kenya Breweries Limited (KBL), for instance, has introduced an online bar to offer convenience to customers and to reach new ones.

Esther Gitau had underestimated her girlfriends’ capacity to party when she hosted them for dinner at her house in Kasarani in 2020. Besides food, she had a bottle of gin and a dozen beer cans, just in case they wanted to indulge more.

Well, her three friends did not restrain themselves. By dinner time, they had downed the beer and turned to the gin. By 11 PM, the gin was halfway. ” The girls were not slowing down. It was deep in the Covid-19 pandemic and clubs were not operational. It was also past curfew hours. ”

Esther panicked. She had to think on her feet. ” I went online to look for alcohol delivery businesses. Most of the outlets had closed for the day. Some said they did not have a rider. Others said I was out of the delivery range. I was so disappointed. ”

By midnight, the drinks were over. There was no hope for a delivery. She did the unthinkable. ” I showed up at my neighbor’s door. It was awkward because we barely talked, worse to ask for alcohol. But I had guests to entertain. Thankfully, he was understanding. He gave me half a bottle of whiskey. ” Her neighbor had saved the night.

For many drinkers, the story loosely follows the same script: you run out of drinks while hosting a party. Often, it is too late to go out. You scour the web in the hope of finding outlets. Sometimes you find them, other times it takes longer to deliver. There is also the risk of getting the wrong order delivered. That is if you are lucky to avoid scammers.

After being confined to their homes for months during the lockdown, many Kenyans had to learn to enjoy their drink from home. With clubs and restaurants closed for months, social drinking was not a choice.

This triggered the rise of alcohol retailers (commonly known as wines and spirits businesses) in neighborhoods across Kenya. Whereas clubs and restaurants were laying off staff and others winding up owing to loss of business, alcohol retailers were living through their most glorious days, with increased sales.

Maurice Njoroge, who owns Pints ​​on Wheels, a liquor store in Valley Arcade, says the spike in sales experienced in the days of the pandemic has remained steady two years later.

” Most people have gravitated to ordering drinks from the convenience of their homes. This has been a major wake-up call to those of us in this type of business to make our delivery business more reliable for consumers, ” Maurice says.

Nearly a year since alcohol-selling joints were reopened, many are still disinclined to go back to their previous drinking habits. Maurice argues that going to a club just for drinks is exhausting, expensive and sometimes a risky affair, for many revelers.

So, why not drink at home?

” I’m not excited by the aura of a club anymore. Somehow, spending so much time at home in the months of Covid-19 made me realize I actually dislike chaotic environments. If I want a drink, I simply order and indulge from home. I drink alone or invite friends over, ” explains Esther, who has since found two reliable outlets for home delivery.

Away from home, there is also the ” park n chill ” (also pull up and chill) phenomenon where party-goers drive to an agreed outdoors location to enjoy their drink, food and music. This could be anywhere from known picnic sites to the roadside and the edge of a forest.

The drive-concept was started by DJ Pierra Makena and others during the pandemic to give local artists an opportunity to perform to audiences when clubs and entertainment joints were shut down.

A year later, and with the full opening of the economy, these popular events have stuck on. Kenyans are happy to party outdoors.

While there are those that park at popular spots such as Carnivore Grounds for this activity, there are offshoots of the concept where family and friends simply park by the roadside and enjoy their drink with music playing from their cars.

There are also road trips featuring alcohol that have gained traction among Kenyan revelers such as Doreen Leina. Nanyuki, Naivasha, Kajiado and Machakos have become favorite destinations for Leina and her friends who prefer long rides to the monotony of club life in the city.

She says: ” We used to drive to nearby places such as Thika and Ngong during the lockdown. After the first lockdown, we started going to as far as Nakuru. In December last year, my girlfriends and I drove to Nanyuki. ”

Doreen says partying on the road allows them to not only drink minimally but to explore the country as well.

Then there were the non-drinkers such as Anita Chege who experimented with liquor during the pandemic. Anita seldom drank more than wine before 2020. The consulting scriptwriter from Nakuru would only take alcohol ” during special occasions, and even so, just a glass. ”

With the boredom of being locked up alone in the house during the lockdown, she decided to try out some homemade gin cocktails.

” I was shocked to discover how much I had been missing. I would pick recipes from the web and try them out. Over time, I started developing my own. ” Today, she stocks every ingredient for cocktail making: herbs, aromatic plants, mixers and several gin brands.

” It’s exciting to make a cocktail. It breaks the monotony of work. I enjoy my drink better when working. I even invite friends over for a drink. Some of my friends who did not drink before are now drinking. ”

Adds she: ‘I imagined I would shake off the drinking after the lockdown. But I think this is my life now. I have also decided to work from home entirely. This allows me to try out different recipes. I am proud of who I have become. ”

On the flip-side, the pandemic got those like Tony Ndungu to stop drinking. Tony, a digital content creator and journalist, had always enjoyed a drink with friends after work and on weekends. Come the lockdown and telecommuting and Tony had more time on his hands. His alcohol intake shot.

” I turned to binge drinking. I was drinking every day of the week as I worked from home. ” Soon, drinking took a toll on his health.

” I was admitted for four days at MP Shah hospital with alcohol poisoning. This was turning point in my life. I had to quit drinking, ” says Tony who has not touched alcohol since March 2021.

” I do not see myself drinking again. I’m happy to lead a teetotal lifestyle. ”

You want a drink but do not feel like going out? Well, online bars have got you covered. These online bars are built around the convenience of three Ps: platform, payment and party. You order a beverage on an e-commerce platform, pay in the most convenient way and it’s party time.

For many Kenyan drinkers, buying a drink and paying for it using different modes such as mobile money, debit card, PayPal or even cash on delivery, has been a major relief.

When Kenya Breweries Limited (KBL) launched its cutting-edge direct-to-consumer digital marketplace thebar.co.ke last week, it was to respond to the growing demand for quick, easy and convenient alcohol shopping.

The beverage maker says the platform matches its parent company Diageo’s online shop ” The Bar ”. It was launched following a successful test in the Kenyan market during the pandemic.

For KBL and other beverage makers, online bars offer their resellers an additional route to reach their customers and access all brand items.

There is also The V Bar, an online alcohol outlet that was established to ” change the way we shop for beer, wine, and spirits. ” Customers are able to buy cognacs, gins, whiskeys and liqueurs from different manufacturers, local and foreign.

Like in an actual bar, The V Bar also has a section for special collections, including rare champagnes and wines, to suit different palates.

At the Nairobi Drinks, another virtual bar, you can buy anything from Pilsner beer at Sh250 to a Dom Perignon Rosé champagne at Sh51000.

Beverage makers and distributors predict Kenya’s alcohol market to keep growing, driven by the expansion of mobile internet coverage, increase in smartphone use, a youthful population and the popularity of last-mile delivery services (motorcycles).

Ngugi adds that when bars were ordered shut down during the pandemic, their distributors could not sell alcohol. ” We had to develop a direct channel to engage our customers. The platform allows beverage distributors to continue generating revenue even when other channels have been shut down. ”

Does the ” direct-to-consumer ” model come with any price variations? Ngugi says consumers buy drinks at the manufacturer’s recommended retail price, therefore, saving them money. He adds: ” Whenever we are running offers and promotions, consumers also benefit. ”

The biggest selling point? Authenticity, Ngugi insists. ” By ordering your drink online, you are guaranteed of quality products because they are coming from our certified distributors. ”

Yet other drinkers such as James Ndirangu are unaffected by the shifting habits. He continues to go out for drinks just as he did before the pandemic. Says the photographer: ” I am a social drinker. I have to be around people to be able to enjoy a drink. We meet at my neighborhood ‘local’ on most weekends. ”

He has never ordered alcohol online. ” It just does not appeal to me. I am working most of the week, so whenever I get time, I hang out with my friends to catch up over a drink. ”

Food & Drinks How new drinking habits stuck on post-lockdown Saturday April 09 2022 Young people outdoor having fun- partying concept. PHOTO | SHUTTERSTOCK By JAMES KAHONGEHMore by this Author Summary A year later, and with full resumption of social and economic activities, some of these practices have refused to go away. After being confined…