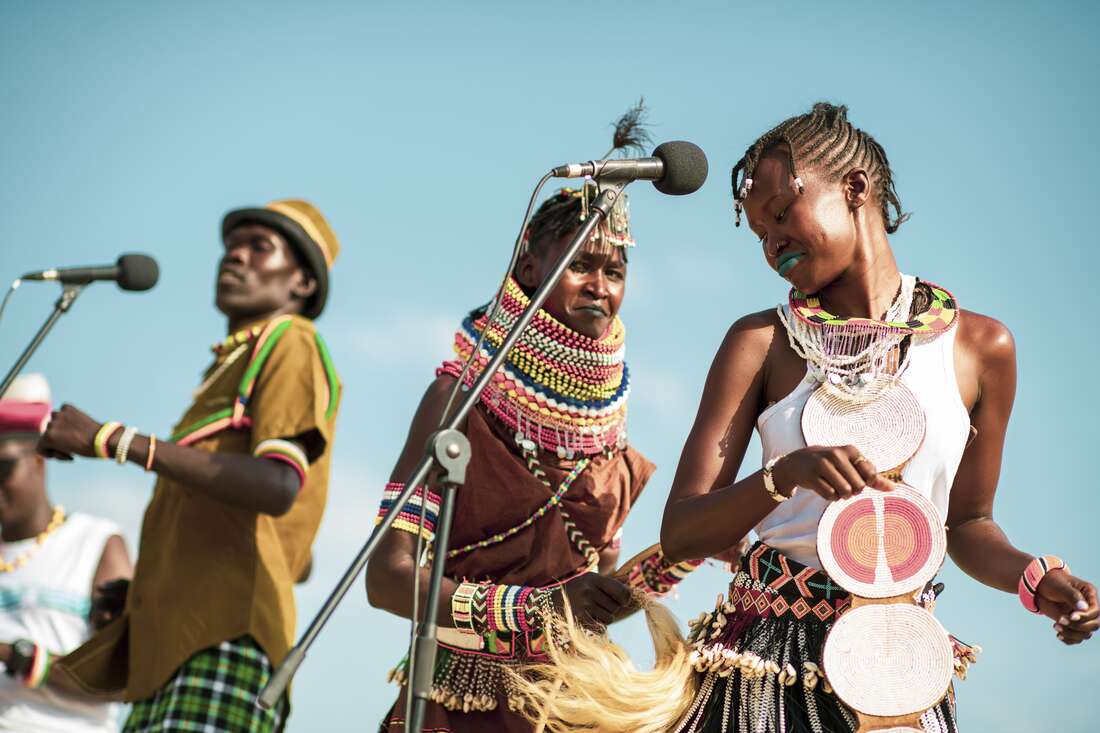 What started as a film and photography project to capture the beauty and cultural heritage of the communities in northern Kenya has unearthed the musical treasures of the Turkana.

“This was purely unintentional, we wanted to create music for the film ‘Races for Resources’,” says filmmaker Jackie Lebo. “But we could not ignore how special the music was so we created a whole separate project.”

Eddie Gray, best known as a jazz guitarist, was roped into the project as a producer / instrumentalist for the album which was released last week by Content House, a group of creatives led by Lebo. The music could even become bigger than the film, according to Lebo.

More than 70 singers turned up when the auditions were called for the project and from that number, four artists were selected to record the 10 songs.

“The best thing is the album showcases the culture of the Turkana and we are so proud that the musicians took over and owned the project in the best way you can imagine,” says Lebo.

“The fusion of traditional and contemporary sounds gives the music wider acceptability and that is why we have Eddie Gray acting as a bridge,” says Lebo.

She credits Gray with being adept at picking the mood and jamming with the singers.

“Within minutes of meeting the group they had hit it off and were speaking a whole other language. We use our hands, feet, and a range of percussions, which Eddie studied so that he could play his guitar in sync with our rhythms, ”explains Mourine Apuu, one of the singers on the album.

Apuu who is a trained computer programmer says when the producers asked them to select songs, she opted to revive two cultural songs that are in danger of getting lost through the generations.

“Aluwai Etori Ayong” is about the death of livestock due to adverse weather and the singer is pondering how to break the news to her father, while “Maata Paiya” is a call for peace among the conflict-riven communities from Uganda.

All the music was recorded live at scenic locations across the vast Turkana: the shores of Lake Turkana, the pyramid hills of Eliye, and the plains of Kerio. The videos for the songs that were shot simultaneously are being uploaded every week on YouTube.

Eddie Gray who has created soundtracks for previous films by Content House says this was a whole new challenge.

“We had to contend with an erratic supply of power, drastic terrain, dust storms in the open desert, and assessing remote locations with the assistance of trackers.”

Even with all these factors, the recording was kept as authentic as possible with all the imperfections. Lebo recalls one recording when it was so windy that the crew lost sound from one mic, and the generator went off affecting the camera lighting.

The music was recorded in March last year with an April release in mind but the second lockdown meant that everything was put on hold. That proved to be a blessing in disguise affording the crew time to work on post-production, including amazing graphics for the video by Bazil Ngode.

“I learned more than I gave because as a jazz artist I understand improvisations and this was a real experience in improvising sounds,” says Eddie.

“We often define music, through education and a process, but it is basically raw expression, and then channel energy through professional approach.”

He gives the example of Elizabeth Korikel who would be singing while she weaved her beads weave and ended up being selected among the four singers.

Korikel is the lead vocalist on “Kirikrim Naro” based on a wedding celebration and “Atintina” which celebrates the beauty that transcends age.

“The music has opened up their world, global audience, women empowered and confidence, they are now flying to Nairobi, their worldview opening up. This is a lesson that Kenya is endowed with so many rich rhythms that you can tap into; you do not have to sing Bongo, Afrobeat, or Amapiano, ”says Eddie.

The album also features the song “One Train” an instrumental piece composed by Eddie Gray as a sequel to his 2007 piece “No Trains to Kibera.”

“There is no question about the depth of talent and the rich culture of the Turkana people, but they need support to create structures, to make their art sustainable,” says Lebo.