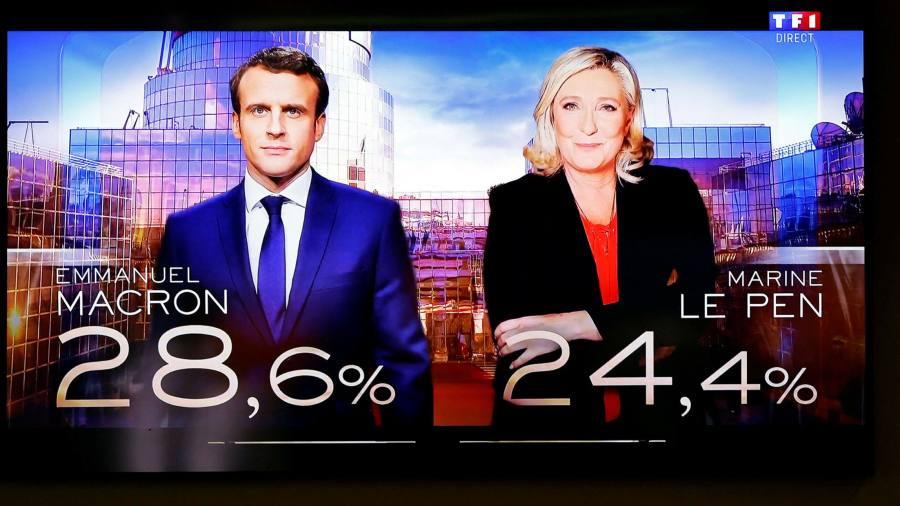 Emmanuel Macron and his far-right rival Marine Le Pen will face each other in the second and final stage of the French presidential election on April 24 after beating the other candidates in the first round of voting on Sunday, according to early estimates.

Macron won about 28 per cent and Le Pen 24 per cent of the first-round votes, ahead of the far-left candidate Jean-Luc Mélenchon with 20 per cent, according to projections by polling agencies based on initial returns.

The result of Sunday’s vote suggests that the 53-year-old Le Pen is closer than ever to winning power for the far right in France and emulating the nationalist victories of Donald Trump in the US and supporters of Brexit in the UK six years ago.

Le Pen told cheering supporters that the final vote in two weeks would decide the fate of “society and even of civilization” and that if she won she would restore the country’s “prosperity and grandeur”.

Alluding to her plan to go beyond her supporters in the far-right Rassemblement National party and establish a government of national unity, she said she planned to be president of “all the French”.

Eric Zemmour, the anti-immigration television polemicist who briefly eclipsed Le Pen after entering the race last year, is projected to have won 7 per cent of the first-round vote – and most of his supporters have told pollsters they will support Le Pen in the second round.

Sunday’s election results underlined the collapse of support for the traditional parties of left and right – the Socialists and conservative Les Républicains who among them provided all French presidents between 1958 and Macron’s victory in 2017 – and the rise of the nationalist extremes.

Valérie Pécresse, the conservative candidate whose campaign failed to take off after she won her party’s primary, is expected to end up with just 5 per cent of votes in the first round. Yannick Jadot of the Greens is also given 5 per cent and Anne Hidalgo, the Paris mayor and Socialist candidate, 2 per cent.

Le Pen is skeptical about the EU, has said she would withdraw from NATO’s military command structure and has in the past been an admirer of Russia’s Vladimir Putin. If she wins two weeks from now it would send shockwaves across Europe and the world at a time when Russian forces are waging a war on European soil in Ukraine.

Le Pen has also promised if she becomes president to introduce more protectionist economic policies to favor French industry, crack down on Islamists and on immigration and forbid women to wear the veil in public on the grounds that it is an “Islamist uniform”.

Fighting her third presidential campaign, Le Pen surged in opinion polls in recent weeks after focusing on working-class concerns about the rising cost of living at a time when prices of petrol and diesel and other goods have spiked after Russia’s attack on Ukraine.

The liberal internationalist Macron – who has been involved in intense NATO, G7 and EU negotiations over sanctions against Russia and support for Ukraine – entered the campaign late and lost his early poll lead as he tried to convince voters that they needed to give him a second five-year term at the Elysée Palace.

He argues that Le Pen as president would be a danger to France, the EU and the western alliance and has criticized her protectionist economic program as incoherent and impossible to finance.

Macron’s manifesto includes persisting with economic reforms and tax cuts to modernize the economy and attract foreign investment, while aiming for full employment after he cut the jobless rate to its lowest level in more than a decade in his first term.