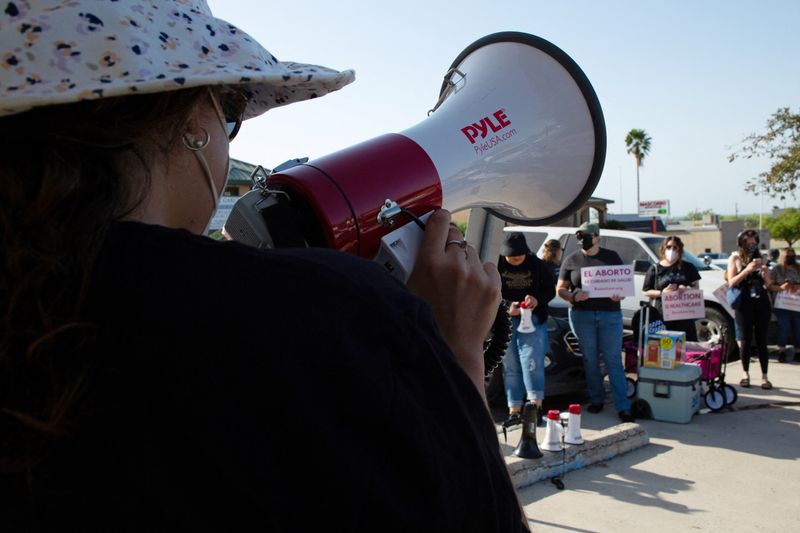 © Reuters. Protesters stand outside the Starr County Jail after Lizelle Herrerra, 26, was charged with murder for allegedly performing what authorities called a

RIO GRANDE CITY, Texas (Reuters) – A small group of protesters gathered Saturday outside a sheriff’s office in southwest Texas where a 26-year-old woman was reportedly charged with murder after performing what they said was a “self-induced abortion.”

Lizelle Herrera was arrested on Thursday by the Starr County Sheriff’s Office with a bond set at $ 500,000, according to Valley Central.com.

According to a sheriff’s office spokesperson, Herrera was arrested after it was learned she “intentionally and knowingly caused the death of an individual by self-induced abortion,” the news outlet reported.

The sheriff’s office would not confirm the report or return a request for comment.

About 20 people gathered outside the Starr County Jail on Saturday morning in a protest organized by La Frontera Fund, an abortion assistance group in the Rio Grande Valley.

“She miscarried at a hospital and allegedly confided to hospital staff that she had attempted to induce her own abortion and she was reported to the authorities by hospital administration or staff,” Rickie Gonzalez, the group’s founder, said on Saturday.

The group has not been able to confirm details, she said, but said it is believed to be the first arrest in Texas since a new state law took effect last year.

The law bans abortions at around six weeks, a point when many women do not yet realize they are pregnant, with no exception for pregnancies resulting from rape or incest ..

The Texas law enables private citizens to sue anyone who performs or assists a woman in getting an abortion after embryo cardiac activity is detected. Individual citizens can be awarded a minimum of $ 10,000 for successful lawsuits.

The US Supreme Court in December left the ban in place but additional legal challenges are pending.