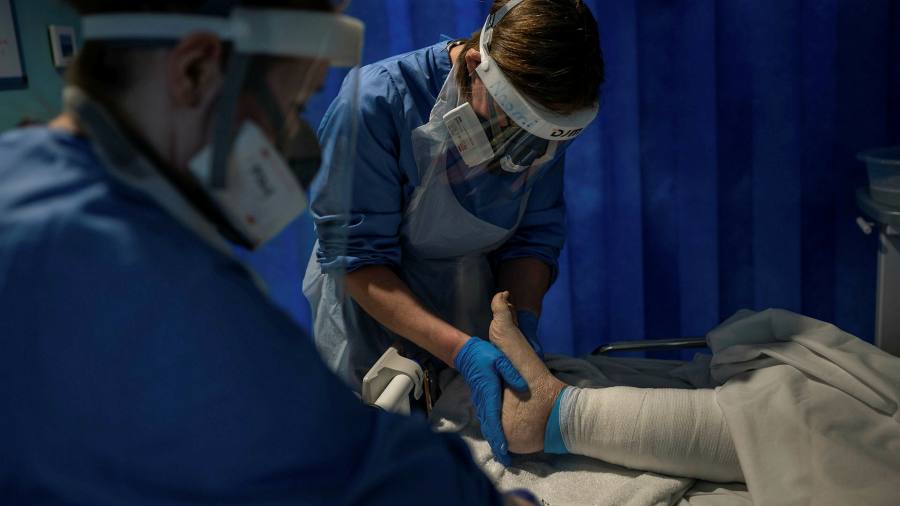 Health leaders have called on the UK government to “revamp” its plan for living with Covid in England, accusing Number 10 of having “abandoned any interest” in managing the disease.

The strongly worded intervention from the NHS Confederation, which represents organizations across the healthcare sector, comes as clinicians struggle to clear waiting lists that stand at more than 6mn, against a backdrop of record numbers of coronavirus infections.

The body suggested targets for reducing waiting times, set before the latest Omicron variant surge, may no longer be achievable this year.

An estimated one in 13 people in England had coronavirus in the week ending April 2, the highest level recorded at any point during the pandemic, according to the Office for National Statistics data published on Friday.

However, there are early signs that the wave is abating, as the ONS registered a slight fall in infection rates in early April.

Similarly, the wave of Covid hospital admissions appears to be nearing its peak. There were 14,547 coronavirus-related hospitalizations recorded in the week to April 6, according to NHS data, a fall of 1 per cent on the week before.

Nearly three-fifths of patients with the virus in English hospitals are being treated primarily for another medical problem, while Covid-related absences among NHS staff have remained flat for the past fortnight.

However, the strain on the NHS has been writ large in the past week, when around 20 accident and emergency departments in England issued diverts, meaning patients had to be taken elsewhere.

The confederation pointed out that bed occupancy levels were also extremely high and staff absence rates were well above the average for this time of year. Matthew Taylor, chief executive, said: “The brutal reality for staff and patients is that this Easter in the NHS is as bad as any winter.”

Yet instead of the understanding and support NHS staff had received during 2020 and 2021 “we have a government that seems to want to wash its hands of responsibility for what is occurring in plain sight in local services up and down the country,” he added.

Number 10 “has seemingly abandoned any interest in Covid whatsoever”, Taylor said. The Treasury had “taken bites out of the already very tight NHS budget”, while soaring inflation meant the NHS settlement was now worthless.

“It is now unclear that anyone in the center of government feels the unfolding NHS crisis is their responsibility,” he added.

The confederation is calling on the government to send stronger messages to the public about taking precautions. Realism was also needed about what the NHS could be expected to achieve in the face of very high Covid levels, rising demand for urgent and emergency care, and backlog pressures, Taylor said.

The Confederation said the government should also reconsider its request for the NHS to absorb the costs of lateral-flow tests until the infection rate and admissions had been significantly reduced “or be upfront with the public that some performance targets around elective care will not be hit” .

The Department of Health and Social Care said: “The success of our vaccination and antivirals programs alongside increased public understanding on managing risk means we can start living with Covid – with public health guidance and free testing focused on groups who are most at risk from the virus.