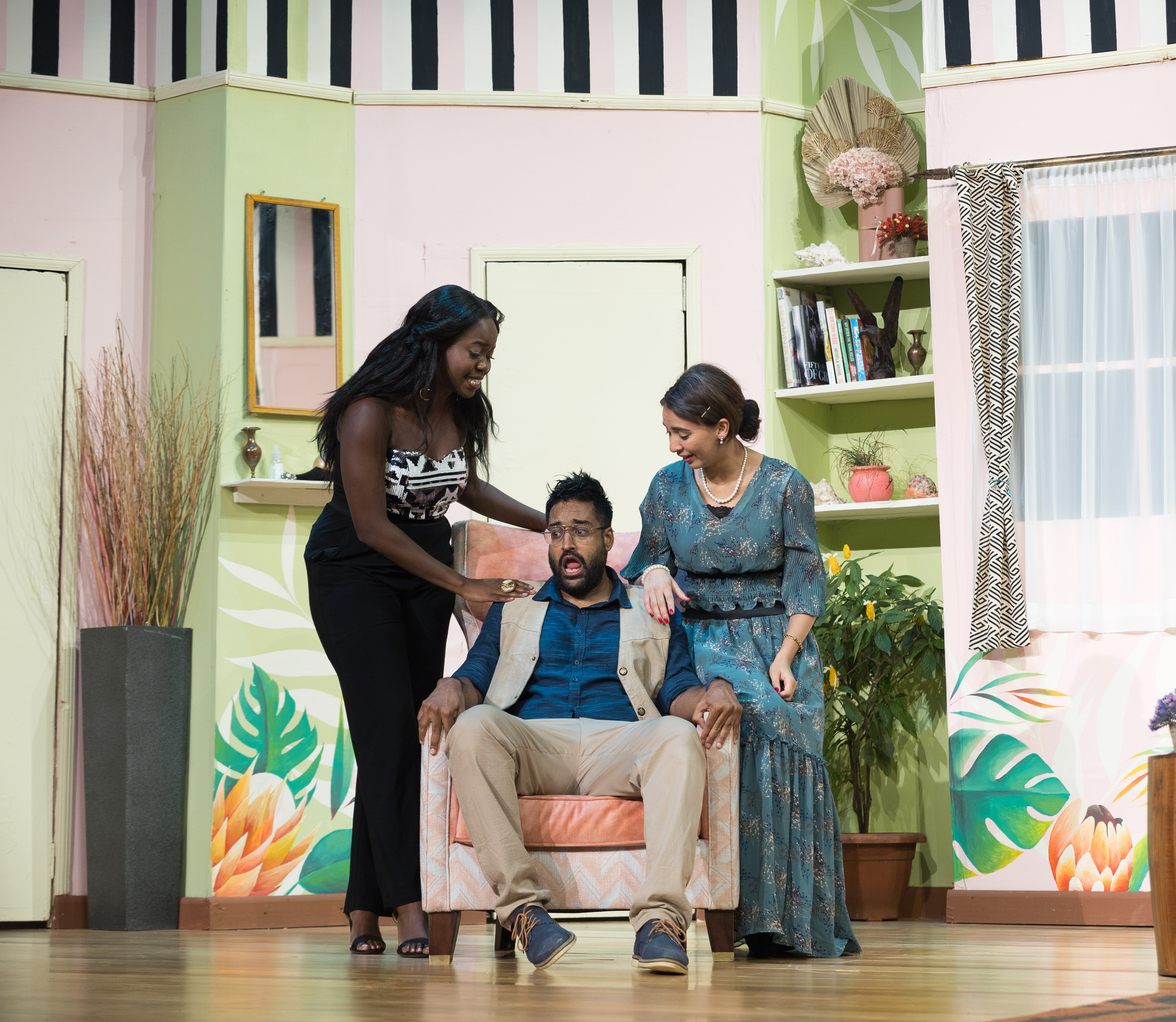 Aperture Africa has not been on stage in the last three years, and they have been sorely missed by their giant fan-base.

Yet there’s a query among some Kenyans why this talented local company continues producing shows that are so very British when Kenyans are keen to see their own characters performed on stage.

To that concern, I’d say that when British comedy is performed well, as it was last weekend when Aperture staged Ray Cooney’s “Caught in the Net”At the Jalaram Auditorium in Parklands, it transcends national boundaries and has a universal appeal.

And after all, polygamy is not a common Kenyan practice, whether women appreciate it or not? And isn’t the covering up of personal feelings a universal part of wedlock? Couples may claim to be totally transparent with one another but rarely is that the case.

In the case of John Smith (Pritul Raithatha), his double life of duo-wedlock is the subject of the Cooney comedy, (better known as ‘Farce’). From the word go, we see what the playwright intended and what Aperture employed very well, namely having two separate storylines played out on one stage simultaneously.

Both their dads’ have the same names, ages, and occupations! Among the kids, there seems to be no hint in their heads that their supposed double set of dads might be just one man.

But their curiosity has the better of the youth. Gavin, aged 16, and Nikki, 15, are keen to meet up in person since they’d stumbled into one another on social media where they got to chat on friendly terms.

Both mothers are respectful of their busy taxi driver spouse, so they insist that Dad be informed first. After all, everybody’s heard about internet predators and Dad might disapprove of his daughter going to meet a total stranger, which of course, he does. But not for the reasons he gives to Nikki.

He knows both families should never meet. He’d been warned long ago by his buddy Stanley (Hiren Vara) that he’s living dangerously, since one lives in Parklands, the other in Gigiri. That’s too close for comfort, but John does not give the threat a second thought.

That is, not until it’s almost upon him. His children are hell-bent on meeting and the rest of the farce is all about the hilarity that ensues as John tries to waylay the inevitable.

He employs Stanley to help him elude the children’s rendezvous. But Stan has other plans. He’s meant to go with his senile father (Vikash Pattni) to vacation at Lake Magadi, but he never gets there. Instead, he steals the show, concocting crazy tall tales to delude everyone from Gavin and Mary to Nikki and Barb.

It’s John of course who’s the most masterful liar. He and Stan display the type of split-second timing required to turn a mere amateur show into a professional experience that has your audience immersed in their own laughter at the antics of the cast.

It did not matter that Tirath did not look 16 or that Nixsha was not 15, but 21. What mattered was that this cast was beautifully directed and staged in front of a set design that looked cozy, colorful, and professionally constructed.

The sound and lights guys, Rohan Sanghrajka and Khush Shah, also deserve applause. The audibility of the entire cast was impeccable. And I can not fail to mention the world-class auditorium at Shree Jalaram Satsung Mandal where the seating is arranged so that everyone has an excellent view of the stage.

What also mattered was the extent to which John and Stan went on to make total baffoons of themselves while at the same time playing such endearing yet crazy characters.

Of course, the climax of the show is when John finally gets caught, and he gets down on his hands and knees begging for forgiveness from wives who, as it turns out, knew about one another for the last 15 years.

They are effectively best friends since they’ve shared their stories, and decided they had a good thing going on with John. So why trouble the guy. Let him live a double life.

The only issue was the incest that might ensue if the kids got together. But the show ends with a bang as Mary reveals that Stanley, not John is the father of Nikki! So they’re essentially one happy family!

Nature Double life deals a duo-wammy of laughs Tuesday April 12 2022 John Smith with his two wives in Aperture Africa’s ‘Caught in the Net’ on March 28, 2022, at Jalaram Auditorium, Parklands. PHOTO | MARGARETTA WA GACHERU | NMG By MARGARETTA WA GACHERUMore by this Author Summary From the word go, we see what…

PSEi sinks on fears that Russia may step up attacks