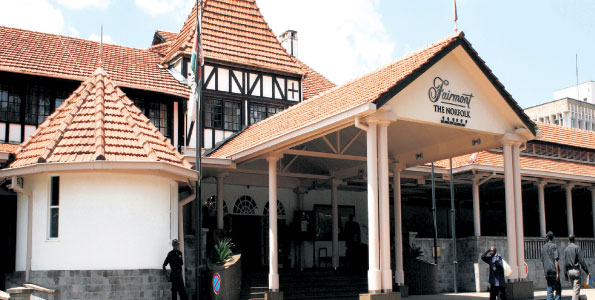 Fairmont The Norfolk Hotel in Nairobi reopened last week after a chic and intimate revamp.

“The décor is very well curated, and the blues and greens are colors of peace and warmth. There are a lot of sitting areas without one facing the other, so you can have intimacy in your meetings be it business, personal, or a date. That’s what we wanted to create and I think it came out very strong, ”said Mehdi Morad, the general manager of Accor Group.

The hotel has undergone many re-designs, through its various owners since it was opened over 100 years ago, to accommodate the tastes of the era.

French printed seat and cushions at the bar at Fairmont The Norfolk on April 8, 2022. PHOTO | DIANA NGILA | NMG

“We may have closed for the wrong reasons, but now we’re opened for the good reasons, for hope, for bringing value to the market,” he said.

The double glass doors opening to the foyer with white granite floor and a dark modern oval chest break the space making it more inviting as the vases of blossoming flowers neatly arranged, lead the eye straight into the garden.

If you look up, there is an oval-shaped painting of the sky, as though there was a skylight above, similar to Michelangelo’s The Creation of Adam fresco at the Sistine Chapel in the Vatican.

Before the renovation, there was one large block in the reception area.

“This made guests feel like they could not reach us. Now, we broke down that, there’s more room for intimate access and personalized touch, ”he said.

The wallpaper, a black and white take of the wild, is very noticeable.

“The wallpaper is inspired by nature, be it bush, be it safari, be it the jungle. It is inspired by the wild, and wild animals, and that invites you and takes you into our garden, which is the only green area of ​​this size in any hotel in CBD {Central Business District}, ”Mr Morad.

The reception counter, with dark wood and a white perforated design on the panels that carry through the bar, adds that classical French touch with a North African feel.

The business lounge has a curved, ancient, restored Indian bench, and is in use under a skylight letting in the afternoon sun cut by half by the large branches and leaves of the evergreen garden that play host to various bird species chirping.

“This is my favorite place,” the general manager says.

The terrace with brickwork, and arched windows, brings the outdoors in. The seat is made using bamboo.

“What I like about these seats, is that they are not stiff. In most of the seats, 99 percent of the comfort comes from the cushion, because that’s what prevents you from being uncomfortable. But in this case, the bamboo takes its own freedom, it gives you more space, and it follows your form, ”Mr Morad said.

Although the seats are made from bamboo imported from South Africa, the assembly and installation of the fabric cushions were hand-made locally.

The courtyard cobblestone is the original from 1937 when the rooms were constructed under the ownership of Abraham Block.

Looking at the thought put into the design, there are animal forms like the monkey climbing a tree lampstands, along with the leopard ones too, the cushions with the hare, and other wild animals in the bush, Mr Morad an enthusiastic wildlife photographer adds, “Everything is about the savannah and Africa.”

As an ode to Kenya’s history, there are stamps from back then mounted on golden frames.

The waiting area now plays host to a library of sorts with historical books on either side of a marble mantelpiece that was originally installed during the construction of the hotel.

At the bar, the high stools carry hand-embroidered prints of animals found in the wild, a testament to the rich legacy of the hotel and big game hunting parties, like that of Winston Churchill in 1909 while under secretary of State for Colonies and former American President Theodore Roosevelt in 1909, before conservation, took center stage.

The large, arched windows on the side of the Cin Cin cocktail bar mirror the table lamps set in soft green feathers reminiscent of 1920s Hollywood glamor.

“Globally, the inspiration for the décor comes from Asia, Africa, and Europe. We have African wildlife embedded into Asian landscapes, for some of the pieces, and of course, Kenya, our animals, landscape, and history, ”Mr Morad said.