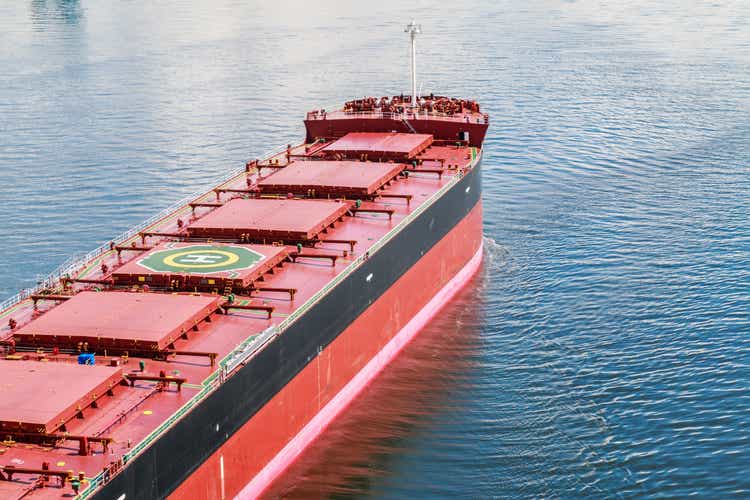 While shipping and airline stocks made the majority of the top five gainers for the week ending April 14, energy / power-related stocks dominated the decliners’ list.

The top five gainers in the industrial sector (stocks with a market cap of over $ 2B) all gained more than + 12% each.

Golden Ocean Group (NASDAQ: GOGL) + 15.59%. The Bermuda-based shipping company led the to five list, while another shipping peer Star Bulk Carriers (SBLK) was not far behind in gains. Golden Ocean gained the most on April 14 (+ 9.65%). The Wall Street Analysts’ Rating is Buy with an Average Price Target is $ 12.25. YTD, the stock has risen + 46.67%.

The chart below shows 6-month total return of the top five gainers and SP500TR:

Delta’s Q1 results, which beat analysts’ estimates, showed that pandemic recovery has continued. Total passenger revenue was 75% recovered from the level in Q1 of 2019 on system capacity that was 83% restored.

Meanwhile, Barclays upgraded Delta to Overweight from Equal Weight, while JPMorgan raised its price target on Delta to $ 69 from $ 57, following the company’s earnings result.

Star Bulk Carriers (SBLK) + 12.03%. The Greece-based shipping company was back in the top five after two months. The company has been a star performer for the investors as it was among the top 5 industrial stocks of 2021 (+ 156.74%).

This week’s top five decliners among industrial stocks (market cap of over $ 2B) all lost more than -8% each. YTD, all the stock are in the red.

The chart below shows 6-month total return performance of the worst five decliners and XLI:

Canada-based Ballard was among the worst five performing industrial stocks of 2021 (-46.32%) and it has continued this trend in 2022, with YTD being down -19.19%. SA contributor Henrik Alex wrote in March, Ballard Power – FY2022 Likely To Be Even Worse – Sell.

Vertiv (VRT) -8.09%. The Ohio-based company, which provides equipment and services to data centers, leapfrogged from the gainers’ list it found itself two weeks ago to land among the losers this week. YTD, the stock has lost more than half its value (-50.42%).

vkyryl / iStock via Getty Images While shipping and airline stocks made the majority of the top five gainers for the week ending April 14, energy / power-related stocks dominated the decliners’ list. The SPDR S&P 500 Trust ETF (SPY) -2.45% was in the red for the second week straight. YTD, the ETF is -7.83%.…

Russia hits Kyiv, Lviv and presses offensive in ruins of Mariupol By Reuters

Municipal Bonds Are Down So Much That They’re Buys Again