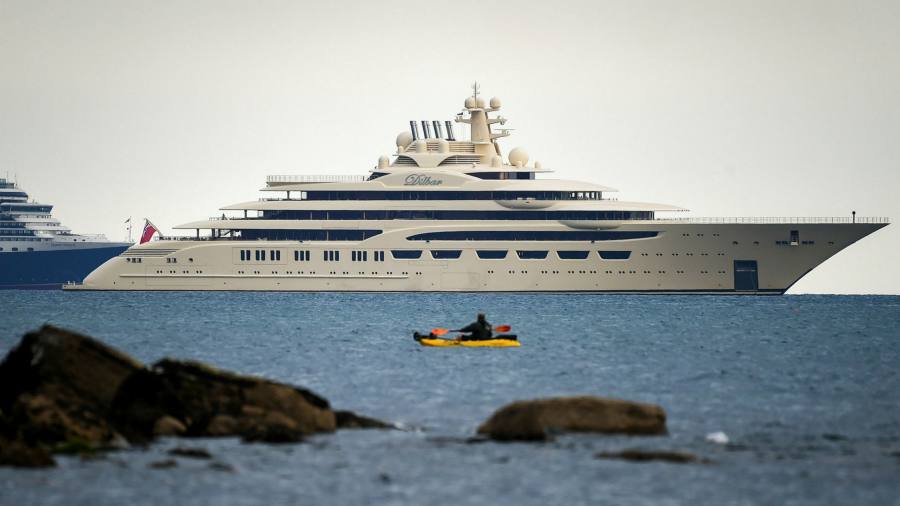 The industrial zone and sprawling lorry park in the small Dutch town of Oss give almost no indication of the opulent yachts being built inside nine covered dockside sheds, or of the identity of their clients or owners.

But Heesen, the local shipyard that boasts of “producing some of the finest superyachts in the world”, is part of a tight network of manufacturers and service businesses for the waterborne super-rich that is now under scrutiny because of their Russian oligarch clientele.

Heesen is ultimately owned by Vagit Alekperov, who runs the Russian oil company Lukoil and is under sanctions in the UK and Australia. The company, which says it is operationally independent of Alekperov, has built three “Galactica” yachts linked to him. It has also built two that are connected to the UK and EU-sanctioned businessmen Igor Kesaev.

It is one of a network of companies in the European superyacht supply chain stretching from designers in Norway to builders in Germany and Italy, brokers in Monaco and crews in the UK.

They balance discretion in their operations with flamboyance in their marketing and their finished products.

Many are now watching nervously as governments step up seizures in an intensifying campaign of sanctions against Russia because of the war in Ukraine.

Just this week, the Dutch government placed 18 yachts in yards under restrictions while their ownership was examined and confirmed that two further boats that are in the Netherlands for maintenance have links to sanctioned individuals.

Egbert Wattel, chief executive of Younique Yachts in Makkum, another Dutch shipbuilding town, describes a longstanding culture of secrecy even for builders of smaller boats like him: “Most owners do not want everyone to know they’re building a yacht. It’s always been like that. It’s like being a doctor – you do not mention who the patients are. ”

Makkum has two huge dry docks – one 110 meters long and the other 120 meters – for outfitting superyachts, allowing ships to be finished while enclosed from every side. They can handle all but the very largest boats.

Ferrye Jansen works in a fish bar in the shadow of the “Cathedral”, one of these structures. He knows where a lot of his customers work. But they can not tell him what they have been doing. “They’re buying their fish and their fries, but they can not say anything. It’s classified! . . . I swam over there but couldn’t see anything. ”

Russians began actively buying yachts in the 1990s as a select few made rapid fortunes following the collapse of the Soviet Union. Roman Abramovich, who made his money in oil, was an early adopter when he bought Sussurro in 1998.

Dozens of others followed his lead as the number of billionaires grew. Superyacht Timesan industry publication, estimates Russian owners today account for 9 per cent of the world’s 2,000 superyachts of at least 40 meters in length.

In the 80-meter-plus category, Russians own a fifth of the 153 ships, second only to Gulf state buyers. The world’s largest superyacht by volume, the 168-meter Dilbar now stranded in Hamburg, is owned – according to the US Treasury – by Alisher Usmanov, a sanctioned oligarch close to Putin.

Boat International, a research company, reports that Russian buyers account for about € 3.9bn of a cumulative global order book of € 35- € 40bn. It says Italian yards are building the most superyachts for Russian clients, with 60 under construction, followed by the Netherlands and Turkey.

Some companies have adapted their marketing to the prevalence of Russian buyers. One person in the sector described an event hosted by a superyacht builder: “We were invited there and the only two languages ​​spoken were Russian and English. All the entertainment for the event was by the Russian philharmonic. ” The website of yacht builder Italian Sea Group, based in Carrara in Italy, is in Russian alongside Italian and English.

Russian buyers are known for having particularly expensive tastes. Alongside saunas, helicopter pads and even submarines, they ask for ultra-luxury fittings including rare tropical woods, special leathers and solid gold taps. “They are one notch below the Saudis,” said one broker.

A Dutch craftsman highlighted both an obsession with detail and secrecy as characteristic of the sector: “The standards are incredible. You have to do things just perfectly. . . but it’s so secret. If I did something amazing today, I can not show my mum. I am not allowed to take a photo of my work. ”

Superyachts are often owned through offshore companies, which disguises their ownership and can offer tax benefits. Sailing in international waters also provides some protection from onshore authorities.

A former coast guard in Antigua told the Financial Times that Russian superyachts often had armed private security guards. “We pretty much leave them [alone]. We can not search a boat that big and we know if we do the owner might have a direct relationship with politicians so we need to be careful. ”

Yet those that work in the industry say owners generally spend a few weeks a year at most on their yachts. While there is an active re-sale market, they also offer a low return on investment, given annual operating costs are typically 10 per cent of the purchase price.

The need for large crews – typically male for the decks, young and female for the interior and with a general preference for non-Russian speakers – as well as regular reprovisioning and online satellite tracking alongside their highly visible presence in harbors also means discretion is limited .

A number of Russians have invested in the industry nonetheless.

Heesen was bought by Alekperov more than a decade ago and is held via his Cyprus investment vehicle Morcell. The company said it “[condemned] violence in every form and [hoped] for a fast resolution of the war ”and that it was“ co-operating in full transparency with government agencies ”.

Imperial Yachts, a brokerage based in Monaco, was founded by Evgenny Kochman and his sister Julia Stewart in 2005 after several years of selling yachts to Russians. It remains a highly influential intermediary for Russian buyers, although it has since diversified its clients.

The company said: “IY is a global business with an international customer base, and we are confident that our business will continue as it is not dependent on any single geography. Whilst the sector will clearly be impacted it is hard to yet understand what that will be. ”

Another broker, Burgess Yachts, a high-end outfit with offices across the globe, has a roster of Russian clients – both owners and those looking to rent at rates upwards of $ 500,000 a week.

The company appeared to remove details of 10 or more superyachts from its website after the invasion started. But an unredacted mirror website used for testing purposes remains active, allowing users to see which boats have gone.

Burgess said in a statement that it “continues to monitor the ongoing situation in Ukraine closely and adheres to all compliance and guidance set out by the governments in territories that the company operates in”.

In Makkum, local business owners agree that superyachts are the town’s most important source of revenue. The yard employs 400 people directly, but also attracts a rotating staff of subcontracted specialists, who drink in the town’s bars and stay in its hotels.

But there is little sense of how the town’s economy will be affected by sanctions. Subcontractors often do not have clear sight of their ultimate clients. One said: “To be honest, we do not have a good sense of who the clients are. Sometimes it comes out, or they visit. But I worked on something and I only realized who owned it when I saw it got seized. ”

Others in the stress sector that they are careful to follow “know-your-customer rules” and have no desire to fall under the scope of sanctions. They also play down suggestions that the crackdown might hit business.

Rory Jackson, business editor of The Superyacht Group, a data and research company, said: “I do not think it will make buyers wary. There is no sense in buying such a vessel and then trying to make it inconspicuous. ”