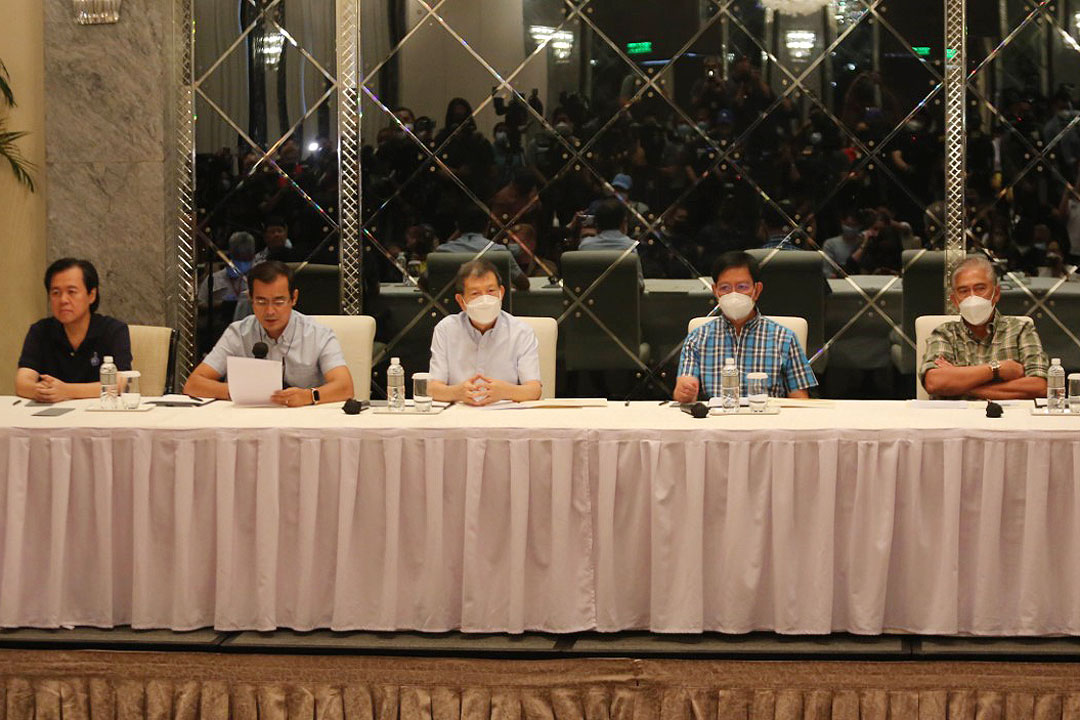 Presidential laggards vow they will not quit race

THREE presidential candidates on Sunday vowed not to drop out of the race, amid calls by some sectors for them to back Vice-President Maria Leonor “Leni” G. Robredo and prevent another Marcos presidency.

“We will never let go of our campaigns,” Manila Mayor Francisco “Isko” M. Domagoso, who is a distant No. 3 in presidential opinion polls, said at a hastily called news briefing in Filipino. “Each of us will continue with our own candidacies to deserve being chosen by the Filipino nation.”

He was joined by Senator Panfilo “Ping” M. Lacson and former National Security Adviser Norberto Gonzales, who are also trailing in most opinion polls. Mr. Domagoso said Mr. Pacquiao, who was absent on Sunday, had also supported the statement.

The presidential bets focused too much on Ms. Robredo instead of former Senator Ferdinand “Bongbong” R. Marcos, Jr., who is leading in presidential opinion polls, said Jean Encinas-Franco, who teaches political science at the University of the Philippines (UP).

“If you want to win, why are you hitting the No. 2 and not the No. 1 when there are more reasons to hit the latter? ” she said in a Facebook Messenger chat.

Mr. Marcos kept his lead in Pulse Asia Research, Inc.’s presidential opinion poll last month, with 56% of Filipinos saying they would vote for him, even if his rating fell by 4 points.

“But in making these choices, we should not ask ourselves: Must this assertion be made through bluster and falsehood? Who benefits from such theatrics? ” he asked.

“Perhaps, silence would have had more depth; at the very least, it would exhibit less self-entitlement, fragility and toxicity. ”

“We are thankful that the alignments have been made even clearer. And we remain focused on showing our people that a Robredo presidency will mean a victory for all Filipinos, ”he added.

At Sunday’s briefing, the three candidates accused Ms. Robredo’s camp of negative campaigning. “Let’s stop the quarrel between the reds and yellows,” Mr. Domagoso said, alluding to the camps of Mr. Marcos and Ms. Robredo, respectively. The two other candidates also attacked the opposition camp.

Mr. Domagoso, who has presented himself as an alternative candidate, called the vice-president’s supporters “yellow,” a derogatory term used against the political supporters of the late President Benigno SC Aquino III.

His mother, the late President Corazon C. Aquino, led a popular street uprising that toppled the regime of the late dictator Ferdinand E. Marcos – Bongbong’s father – and forced him and his family into exile in the United States in 1986. Ms. Robredo is not a member of the Aquino clan.

Mr. Domagoso and Mr. Lacson also lamented how they were being forced to withdraw from the race, and the fact that they have lost some supporters.

The issues raised by the candidates were “nothing new,” said Maria Ela L. Atienza, who also teaches political science at the UP. “A press release signed by all of them would have sufficed,” she said in a Viber message.

She noted that instead of raising attention to reported anomalies in absentee voting, Mr. Domagoso, Mr. Lacson, and Mr. Gonzales “focused on themselves as victims and threw accusations based on social media.”

“They sounded like Duterte apologists who seek to frame the country as just divided between reds and yellows,” she said. “This is very simplistic and an insult to Filipino voters.”

PHILIPPINE STAR / RUSSELL PALMA Town Kyle Aristophere T. Atienfor, Reporter THREE presidential candidates on Sunday vowed not to drop out of the race, amid calls by some sectors for them to back Vice-President Maria Leonor “Leni” G. Robredo and prevent another Marcos presidency. “We will never let go of our campaigns,” Manila Mayor Francisco…