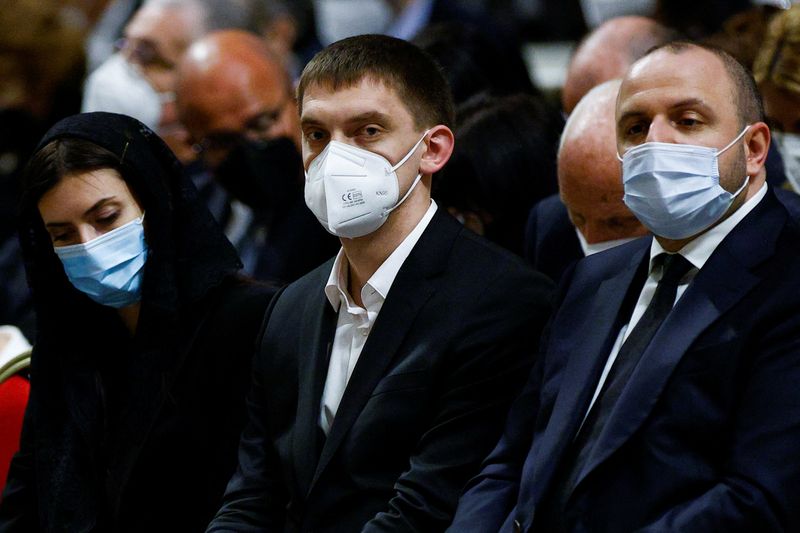 ROME (Reuters) -A Ukrainian mayor described hours of “hard” interrogations when held for almost a week by Russian forces last month and said he had appealed to the pope for help to stop a war that had wrecked swathes of his city in southern Ukraine .

“It was a dangerous six days because I understood that for Russians my life and the lives of civilians were worth zero,” Ivan Fedorov, mayor of Melitopol which is now under Russian control, said in Rome on Sunday, a month after his release.

Ukraine said Fedorov was abducted on March 11 after Russian forces seized Melitopol, which lies west of the besieged city of Mariupol in a southern region that Russia seeks to control. Kyiv announced Fedorov’s release in a prisoner exchange on March 16.

Russia, which calls its actions in Ukraine a “special military operation”, has made no comment about the mayor’s detention or the prisoner swap reported by Ukraine.

Fedorov, who met with Pope Francis and Vatican Secretary of State Cardinal Pietro Parolin on Saturday before attending an Easter eve service, said he had asked the Vatican to intercede with Russian President Vladimir Putin to guarantee humanitarian corridors for Mariupol, which has faced devastating bombardment.

Major Serhiy Volyna, commander of Ukraine’s 36th marine brigade which is still fighting in Mariupol, also appealed to the pope for help in a letter posted on Telegram on Monday.

“I do not have much time to describe all the horrors that I see here every day. Women with children and babies live in bunkers … Every day the wounded die because there are no medications. No water, no food,” he wrote. “Help save them.”

Describing his detention by Russian forces in Melitopol’s police department, Fedorov said in an interview: “They came to me at night with five or seven soldiers and spoke for about four or five hours, hard dialogue.”

‘HALF MY CITY IS WRECKED’

“They wanted to make an example of me about what would happen if we did not agree to what the Russians wanted,” the mayor told Reuters and the Italian newspaper Il Messaggero, saying he had faced “psychological” but not physical torture.

“Russian soldiers assumed that they would be welcomed but they were not … and that is why the Russians were very, very angry,” he said.

“There is no food in my city. There is no pharmacy. Half of my city is wrecked. More than 200 people have been kidnapped. It is not safe to walk the streets,” he said.

Russia denies targeting civilians and rejects what Ukraine says is evidence of atrocities, saying Kyiv has staged them to undermine peace talks. Moscow says it launched its military action almost two months ago to demilitarize Ukraine and eradicate what it calls dangerous nationalists.

Seizing Melitopol, Mariupol and the southern coast would give Russian forces a land link between pro-Russian separatists in eastern Ukraine and the Crimea, which Moscow annexed in 2014. Russia has said it almost has full control of Mariupol.

Fedorov, who said he remained in regular contact with the people of Melitopol, said he had invited the pope to visit Ukraine because “maybe he can stop this war”.

Pope Francis has implicitly criticized Russia, calling for an end to a war that involved unjustified aggression and invasion. Addressing Fedorov and other Ukrainians in the Easter eve service, the pope said: “Have courage, we accompany you”.