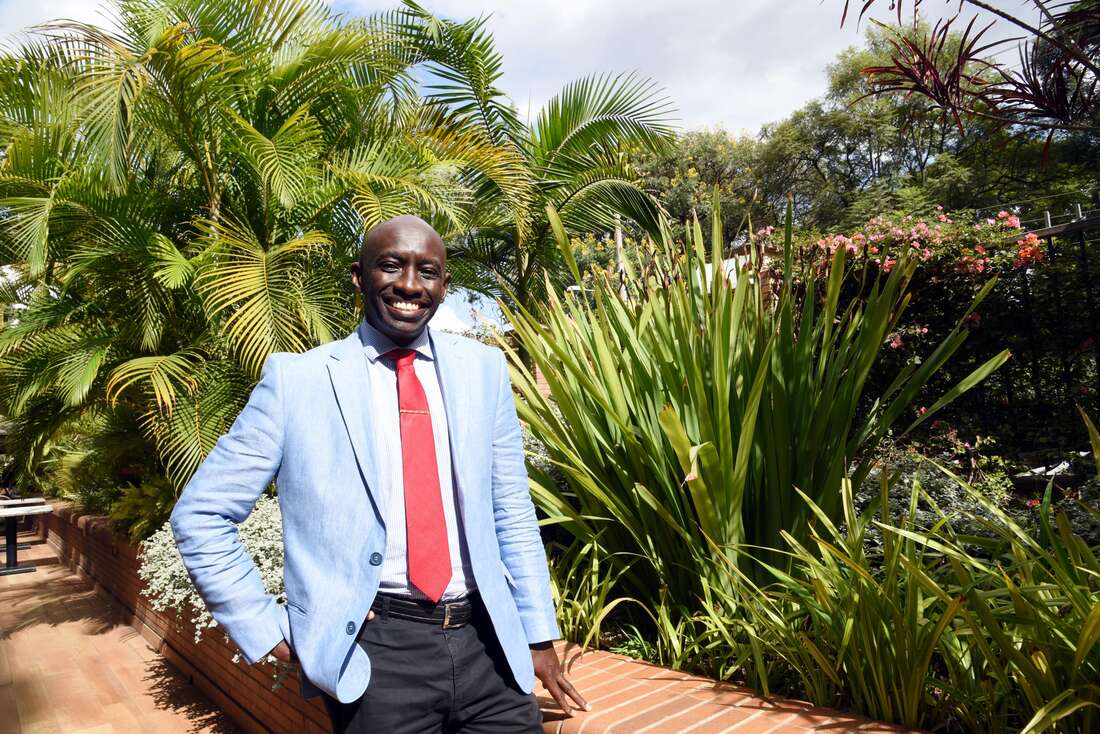 In a time span of one hour, David Gatende will tell his story of love; how he met and married his wife, Laiman Bidali, the founder of Alabastron Network Trust.

He will talk about how he stayed in a job for 37 years, the only job he has ever held in his life, starting as a field engineer and leaving as the CEO of Davis & Shirtliff. “It’s been like riding a tiger,” he says.

In the hour, he will also talk about the unforgiving nature of the church towards divorcees and how that affected his faith.

He will also talk about his three daughters at some point within that hour, and then dramatically get down on his knees in a busy French bakery and restaurant Le Grenier à Pain in a passionate, if not gung-ho, moment of storytelling.

Some people will turn to stare with a befuddled look of ‘is that man praying?’ In that hour, he will be scaringly frank about a man with no excuses for who he is and the journey he has had.

David is 60 years old and is retiring from the corporate world. He is youthful, optimistic and most importantly, he glows with the glow of a man in love. His life feels like it has just started anew, a rebirth, he tells JACKSON BIKO.

There is a way you told the waitress, “my wife is seated outside… ask her if she wants anything. ‘ There was a freshness and brightness with how you said, ‘my wife.’ Almost like it’s a new word on your lips. Did you marry late by any chance?

Actually, this is my second marriage. We struggled in my first marriage… do you know a therapist called Joe Owade?

Yes, he has seen me a few times. He likes wearing cool fedora hats.

[Laughs] Yes. He was our therapist and a damn good one. He told me, “David, I have seen many couples over the years, but I do not know another couple that has seen more professional counselors than you and your [ex] wife. ”

Over the years, I counted eight. Not counting the pastors, the elders, the parents, the best friends, and the best maid, all of that.

We really tried to save that marriage. We separated in 2007, after seeing all those therapists and eventually divorced in 2016.

I must tell you this; I felt very conflicted about the divorce because for somebody who is a born-again Christian, who has been an elder of churches as I have, to get divorced is full of stigma.

I stepped down from being a church elder and a chairman of a board of another Christian organization. I established something called the Single Christian Husband’s Fellowship, for men who were looking for wives.

I wanted my friends to help me find someone— people who knew me and my values.

At my age, we do not meet in bars and I did not want to waste time going through endless and senseless dates. I met my wife through a friend who met her a few times to gauge if we would be a right fit because he has known me for a long time and he knows what I want.

I was introduced to Laiman who was also looking for someone and, to cut a long story short, we hit it off. So December 12, 2017, we met and got married during Covid in August 2020 and it’s been fantastic. She’s a truly amazing person, you interviewed her did not you?

Yes, in 2016. She was charismatic and strong. Do you guys want children?

We talked about it and thankfully we both do not want children. She has never wanted children. However, my mother— who is in her late 80s now— thinks we should have children to cement the marriage. [Chuckles] I told her ‘mom, I’m 60 years old, I’m not interested in children.’

I have been there and done that. My wife has a wonderful relationship with my daughters.

What age do you feel inside?

Interesting question. I’ve been told I do not look my age. The fact is when I look in the mirror I do not see a 60-year-old man because I feel much younger. I feel 45. That’s my inside age, 45.

What head-space are you in right now?

That’s a good one. [Pause] There is a book called Transitions: Making Sense of Life’s Changes by William Bridges. He uses a very good analogy of somebody who is remodeling, not building the house.

You have lived in this house for ages, but now it’s old and needs some work for it to go through a new season of its existence. That’s where I am. I’m remodeling.

I’m traveling to all our branches in Kenya, Zanzibar and what I’m finding is people, Biko, who were not even born when I joined the company. And it’s crazy.

So my headspace is one of transition, it’s one of trying to figure out what’s next? I’m happy to leave on a high. The company is doing very well; we have 50 branches in Kenya alone. We’re in 11 African countries. It’s been one heck of a ride. It’s been like riding a tiger.

What kept you in that job for 37 years? Did you not have some sense of curiosity to wonder what else was out there for you to do, and would this be read by others as a lack of ambition?

I get asked that a lot and it’s a valid question because it’s not common particularly today to stay in a job for this long. For me, it’s about purpose. The purpose of Davis & Shirtliff is to improve people’s lives by providing water and energy solutions across Africa.

To be honest, we have not always had it as clearly stated as I’ve just stated it, but I have always had the sense that we are doing something bigger than ourselves. That has kept me grounded, to transform communities. I have been offered positions in different companies that were paying more but I said, ‘no thanks.’

The grass always looks greener on the other side, you go there, you start at the bottom rank and you have to prove yourself. I had no desire for that.

I liked working for Davis & Shirtliff, the environment suited me. There are some organizations you might move to and find that the people and the environment are just toxic – backstabbing and undercutting —and it’s not just worth it. I have been well taken care of where I am, that’s also the truth.

If you were honest with yourself – forget humility — would you ever say you had money problems in your life?

[Pause]. No. I lost a ton of money because I trusted a friend with an investment, but otherwise, I would not say I have had money problems. I have enough to retire comfortably.

My financial goals have always been two; give my girls the best education I can and have enough for retirement. My girls are independent, I do not support any of them. And I’m retiring with a decent package.

I got the sense— from one of your earlier statements – that you aren’t on good terms with one of your daughters. If she is reading this, what is the one important thing you want her to know to thaw things out?

Oh! What would I tell Wambui? [Pause]. When she was born she did not cry immediately like newborns do. I panicked. I was holding her mother’s hand but I let go and ran out of the room. I was very scared and confused.

I thought she was going to get brain damage for not breathing for so long. I ran back in and went down on my knees. [He goes down on his knees in prayer].

I told God, ‘Lord, I’m sorry. I know I wanted a boy but I do not want a boy anymore. I will do whatever I can in my power to bring this daughter you have given me in the best way possible. I promise. Please, save my little girl. ‘

Then immediately Wambui started crying and it was the most relieving and grateful feeling ever.

She’s had diabetes for 25 years and there is no day I have not wished I took the diabetes from her. She’s dealing with many things I know but I just want to let her know that I love her, I have always loved her and I will always love and support her. I will do anything in my power to show her that love. I always wish her well.

You staying in a job for 37 years might mean you are risk-averse. What’s the riskiest thing you’ve done in your life?

Deciding to get divorced. That was not easy, it has come with all the stereotypes.

Did how the church treated you after your divorce change how you feel about it and Christianity in general?

It’s an interesting one. Not at all. But let me be honest and say there was a time I would have thought the same way but having gone through what I have, I see things differently now.

Christianity is not for perfect people. Even the guy I’m named after, David was not perfect but he was a man after God’s very own heart.

You studied engineering and business courses but you added a Master’s degree in counseling and psychology. Why?

It is because of the breakdown of my first relationship with my wife. I could not understand it. How can two born-again Christians fail to get along? I did not think it was possible.

Look, your wife is someone you selected out of a continent of millions of people yet we just could not get along, we could not make it work.

I studied psychology to understand what had happened. How did things go off? When did the rain start beating on me? It makes you look under the skin and see what’s inside.

What did you discover under your skin?

[Laughs] I did not see that one coming. I discovered that I’m flesh and blood. It also reminded me of the parable of the speck and the log in the eye. I needed to align myself with the reality that I was facing.

I learn the impact the divorce had on my girls and how being a father is different from being a husband. I genuinely believed that even if one person does 100 percent, the relationship will survive. I was wrong.

You’ve been accustomed to people holding the door for you, even if you do not notice it. People running your diary, drivers, things are done for you. When you retire you will not be David, the CEO of Davis & Shirtliff, you will just be David Gatende. Have you reconciled with this fact?

I think I’m ready. I hope I’m ready. [Chuckles] But my wife says, ‘you’re going to need someone because I’m not going to be able to do all those things like Doreen [His personal assistant] does. ‘ So I need a PA, I need to hire an assistant for sure.