BMW AG long tried to bill its flagship 7 Series sedan as the more fun-to-drive alternative to similar offerings from Mercedes-Benz AG. As the rivalry goes electric, the German manufacturer is trying to also win over people sitting in the back.

The i7 unveiled Wednesday boasts a luxurious interior that includes a flatscreen lowering from the ceiling to entertain passengers in the rear. They also get more legroom because BMW made the car longer and wider. The company plans to deliver the model, which starts at 135,900 euros ($ 147,384) and offers 625 kilometers (388 miles) of range, to customers from November.

“It’s bigger than before, it has the most exhilarating entertainment you’ll see in any luxury car,” Chief Executive Officer Oliver Zipse said. “It’s the greatest offer BMW has ever made to the rear-seat compartment.”

But BMW is already behind in the luxury EV race, especially when it comes to range and availability. Mercedes a year ago unveiled its EQS flagship sedan, which boasts a range of more than 700 kilometers. Tesla is selling a high-performance version of its Model S that beats the i7 on range and acceleration. Lucid Motors has already delivered several hundred of its electric Air sedans and plans to ship an updated version starting in June. 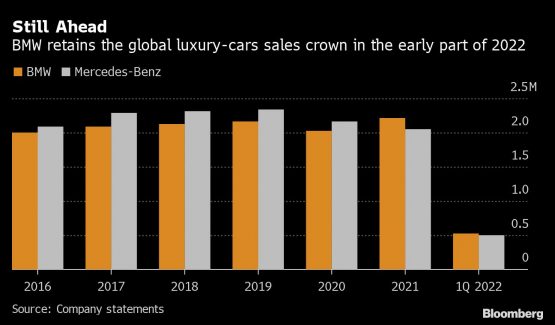 To catch up, BMW is pursuing a different technology strategy than most of its rivals. While Mercedes, Lucid and Tesla build their vehicles on dedicated underpinnings, the i7 is made using the same architecture as its fossil fuel-powered sibling.

Zipse rejected the idea that BMW’s strategy puts it at a disadvantage. It instead hands the company greater flexibility to cater to shifting EV demands in different regions, he told reporters in New York last week.

“We do not have to copy what others do,” he said. “We have the size, the capital strength, the innovation capabilities to be a great system integrator.”

BMW still touts the car as a model that’s fun to drive. Its engineers have reduced the number of physical buttons, added a curved digital screen around the driver’s seat and updated software to assist with lane keeping and automatic parking. The base i7 accelerates from zero to 100 kilometers per hour in 4.7 seconds – that’s slightly slower than the comparable EQS, and well behind the Model S.

Some analysts have questioned whether the i7 can compete with its rivals because of the carmaker’s platform approach. Others are pointing to BMW’s successes with its iX SUV and i4 coupe introduced last fall, the latter of which is also derived from a combustion-engine platform.

“That does not have to be a disadvantage,” said Bankhaus Metzler analyst Juergen Pieper. “It’s not a given that Mercedes can stay ahead of BMW in the electric age.”