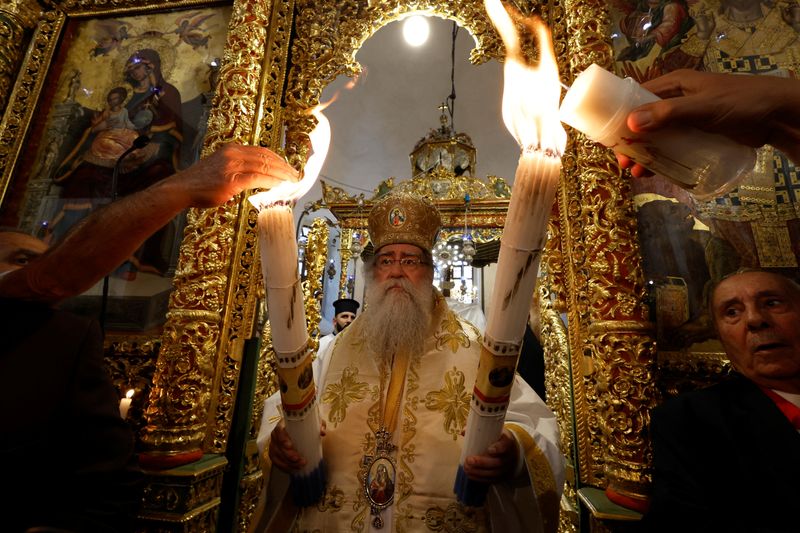 © Reuters. Metropolitan Fenidictus, the Patriarchate of Bethlehem, attends the Holy Fire ceremony, in the Church of the Nativity in Bethlehem, in the Israeli-occupied West Bank April 23, 2022. REUTERS / Mussa Qawasma

JERUSALEM (Reuters) – With processions, chants and ululations, thousands of Christian Palestinians and pilgrims celebrated the Holy Fire ceremony at Jerusalem’s Church of the Holy Sepulcher on Saturday, the first to be held since Israel imposed new restrictions on attendance.

Citing public safety, Israeli authorities sought to limit participation to 1,700 worshipers, a move criticized by church leaders as an infringement of the right to freedom of worship. It was subsequently increased to 4,000.

After hours of anticipation from the crowd, Jerusalem’s Greek Orthodox patriarch entered the tomb where Christians believe Jesus was buried and emerged carrying a lighted candle – without the aid of matches.

Within seconds, the light spread across the darkened church that is revered by Christians as the site of Jesus’ crucifixion, burial and resurrection. The bells competed with cheers from the crowd as a smoky haze filled the chapels.

Michael Toumayan, a 36-year-old Armenian Christian, was among the first to receive the light.

“It’s an honor,” he said. “My father has been doing this since he was a kid and he’s passing down this tradition to me.”

After two years of COVID-19 travel restrictions, Israel has recently started allowing foreign tourists back into the country and Christians had arrived from around the world.

It took “a lot of faith and determination” to make it, said Alina Lord, 48, who flew in from Romania. She woke up at 5 am to attend and managed to secure a position right across the tomb’s opening.

For Sophia Gorgis, 65, who fled the Syrian war to Sweden, it had been a lifelong dream to celebrate the Holy Fire ceremony in Jerusalem.

“I have no words,” she said, choking up. “As soon as we got our (Swedish) passports, we signed up for this trip.”

The Holy Sepulcher lies at the heart of the Old City’s Christian Quarter in East Jerusalem, which Israel captured in a 1967 war and later annexed in a move that has not won international recognition.

The Greek and Armenian Orthodox churches share custody of the Holy Sepulcher with the Roman Catholics, who celebrated Easter last week.

In the past, the light set fire to people’s clothes, even their hair, said Tareq Abu Gharbiyyeh, East Jerusalem’s fire chief who has been fire-proofing the ceremony for the last 30 years.

“Thankfully, it was nothing serious,” he said.

This year, too, the ceremony ended safely.

5/5 © Reuters. Metropolitan Fenidictus, the Patriarchate of Bethlehem, attends the Holy Fire ceremony, in the Church of the Nativity in Bethlehem, in the Israeli-occupied West Bank April 23, 2022. REUTERS / Mussa Qawasma 2/5 By Henriette Chacar JERUSALEM (Reuters) – With processions, chants and ululations, thousands of Christian Palestinians and pilgrims celebrated the Holy…