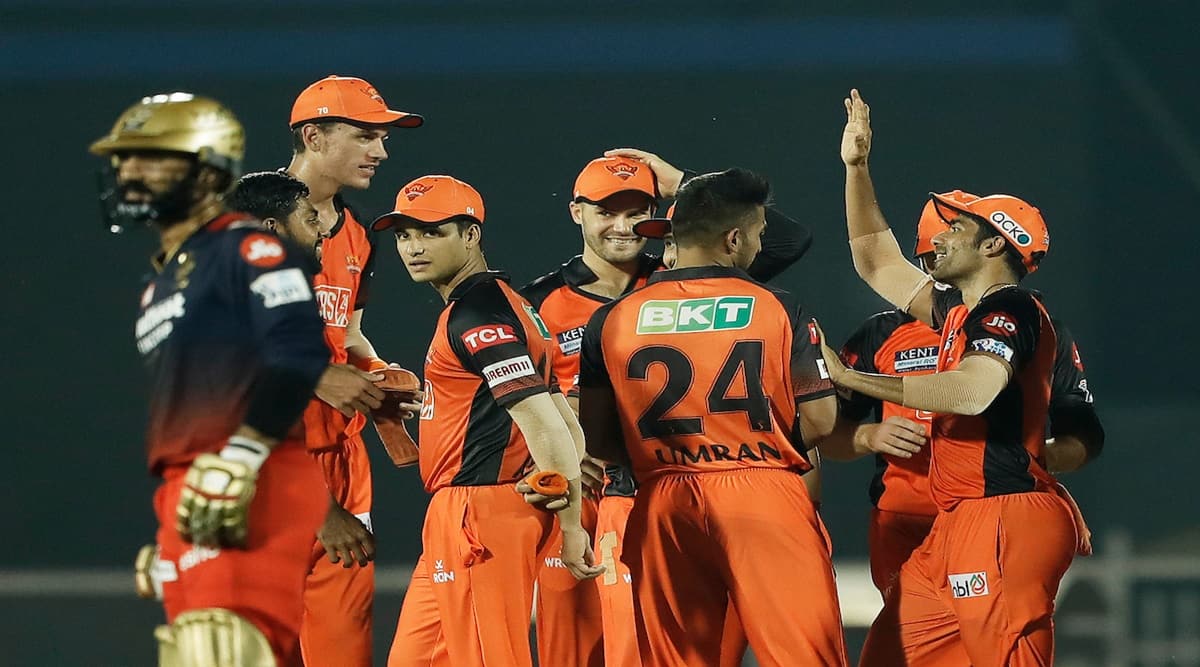 Virat Kohli’s continued woeful form was a sign of things to come as Royal Challengers Bangalore were literally walloped by Sunrisers Hyderabad who cantered to an easy nine-wicket victory in Saturday’s one-sided IPL match here.

Kohli was once again dismissed outside the off-stump off the very first delivery he faced as RCB were shot out for a meagre 68 in just 16.1 overs. This was the sixth lowest total in the history of IPL.

The Sunrisers pace attack led by Marco Jansen (3/25 in 4 overs) and ably supported by Umran Malik (1/19 in 4 overs) and T Natarajan (3/10 in 3 overs) left the star-studded RCB line-up rattled with pace, swing and seam.

In reply, it took SRH only eight overs as Abhishek Sharma butchered an already deflated RCB attack to score 47 off 28 balls in company of Kane Williamson (16 not out).

The win also took SRH to second place with 10 points while RCB, who are still placed third, will like to forget this game as a bad dream. But one would wonder if Kohli can do the same as it’s only getting worse for one of the contemporary greats in world cricket.

The problems are very real and unfortunately, one does not see any corrective measures in his approach as same kind of technical mistakes are being repeated again and again.

Some years back, it was James Anderson and now it is a Dushmantha Chameera and Marco Jansen, who are exposing the big chink in Kohli’s armor.

There could not have been a quicker end to a contest as Jansen removed Faf du Plessis (5), Kohli (0) and Anuj Rawat (0) off second, third and final delivery of the second over to make it 8 for 3.

In case of Jansen, it was seam movement off the pitch with a few that were angled across, some that held its line while Natarajan got some movement in the air and Malik was unleashing his thunderbolts at upward of 150 clicks.

In between, left-arm spinner Jagadeesha Suchith (2/12) was also unrelenting as RCB never got elbow room to get some momentum going their way.

It soon became 20 for 4 when Natarajan got Glenn Maxwell (12) caught brilliantly by skipper Kane Williamson at mid-off. The other player to reach double figure was Suyash Prabhudesai (15).

But, it is Kohli’s dismissal that would certainly deflate his legion of fans as his problems outside the off-stump seems to have resurfaced.

Jansen did pose problems for Kohli during the South Africa Test series a few months back and again bowled the ideal Test match length, full and getting the ball to either shape in or hold its line.

In the last match against Lucknow, it was the backward point that was in operation and Kohli’s propensity to jab at deliveries on off-stump channel with hard hands caused his undoing with Aiden Markram snapping it in second slip.

There was not much resistance from the other batters and once Dinesh Karthik (7) was caught down leg-side off Suchith trying to sweep, it was all over for RCB.

Once it was 47 for 6 after nine overs, the lower order looked mortally scared facing the fast and furious Umran as it seemed as if the ball was hitting the bat rather than the other way round.

Natarajan also kept up the pressure, snuffing out the wickets as veteran Bhuvneshwar Kumar wrapped up the innings.

Virat Kohli’s continued woeful form was a sign of things to come as Royal Challengers Bangalore were literally walloped by Sunrisers Hyderabad who cantered to an easy nine-wicket victory in Saturday’s one-sided IPL match here. Kohli was once again dismissed outside the off-stump off the very first delivery he faced as RCB were shot out…

Dow Jones Futures: Bears Hunt Down Market Bulls; What Investors Should Do Now