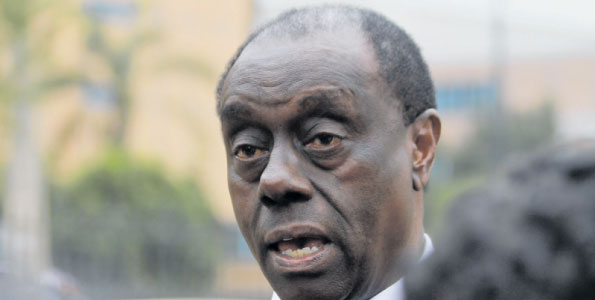 Lawyer Paul Muite has put Kakamega County and KCB Group on the spot for backing the lease awarded to Sarrai Group of Uganda after the High Court ruled that the deal would have seen Mumias Sugar remain under receivership for 20 years.

Mr Muite said the actions of the receiver-manager PVR Rao were meant to protect the interests of KCB to the exclusion of other creditors and the ailing miller would not repay its debts in 20 years.

Mr Muite said it was unfortunate that the county government supported the deal, which was canceled by the High Court last week and even sponsored a court case for the lease offered to Sarrai to be upheld.

Justice Alfred Mabeya canceled the lease last week, saying the deal for Sarrai to manage the once giant miller ‘permanently remain an asset under KCB and be a retirement place its receiver manager PVR Rao ”.

“The latter would superintend administration and receivership for 20 years and yet not be able to fully repay a single creditor,” the Judge said.

The judge pointed out that KCB was happy with that state of affairs and advanced Mr Rao another handsome amount of Sh200 million for alleged “operations” and continued charging interest.

The judge said Mr Rao did not produce the Sarrai lease in court to enable him make an informed decision on its terms and whether it would benefit the ailing miller.

Mr Muite who represented West Kenya in the dispute said the county government should have put the interest of farmers first because the region largely depends on sugarcane farming.

“Political leaders also need to explain why they supported Sarrai Group,” he said.

Tumaz and Tumaz Enterprises, a firm associated with Julius Mwale, was the first to challenge the lease, arguing it was shrouded in secrecy and Mr Rao failed to satisfactorily explain how he settled for the lowest bidder.

West Kenya and other parties later joined the case and successfully argued for the cancellation of the lease and removal of Mr Rao as Mumias administrator.

West Kenya and Sarrai are owned by brothers Jaswant Rai and Sarbi Rai, and their fight over Mumias reflected a family rift.

Justice Mabeya appointed Mr Kereto Marima as the new administrator within seven days and ascertain claims by all secured creditors within 60 days.

The new administrator will start the leasing process afresh in a bidding that is expected to attract increased investor interest.

This could offer the ailing Mumias a new lease of life. Tumaz and Tumaz placed the highest bid of Sh27.6 billion. Mummy creditors are owed over Sh11 billion.

Mr Mwale, a top investor in Kakamega through Mwale Medical and Technology City, said his firm will bid a fresh for Mumias Sugar.

“The court made a well-argued and reasoned judgment,” said Mr Mwale.

The miller was in September 2019 placed under receivership by KCB Group to protect its assets and maintain its operations.

Its shares were then suspended from the Nairobi stock exchange, and the leasing deal will be keenly watched by shareholders, including the State with a 20 percent stake, creditors and bidders.

“It would have been essential to even have a pre-valuation of Mumias which would have informed a reserve price for the bids, one that would have achieved the purpose of paying off Mumias debts and release it from receivership and administration,” the judge pointed out out.