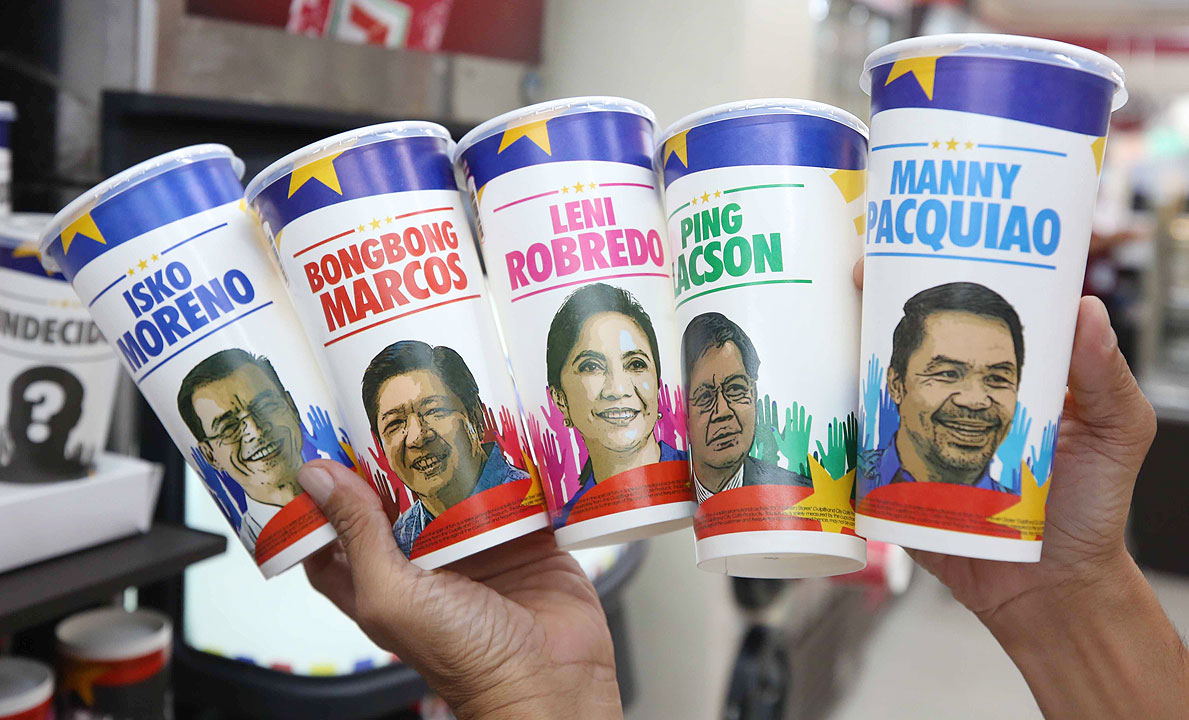 But he changed his mind and is now supporting Vice-President Maria Leonor “Leni” G. Robredo after hearing about her platforms and seeing his friends campaign for the opposition leader at a rally near the Philippine capital last month.

“I was inspired by the event,” he said in an interview. “‘What could have motivated at least 137,000 people to attend the rally?’ I asked after seeing photos of the event online, ”said Mr. Yadao, who works at a laundry shop in Manila.

He is not bothered by presidential opinion polls that former Senator Ferdinand “Bongbong” R. Marcos, Jr. has dominated. Ms. Robredo remains a distant second, though her ratings continue to rise.

Groups and powerbrokers continue to change their strategies two weeks before Filipinos elect President Rodrigo R. Duterte’s replacement, as the presidential contest shapes up to become a two-way race, according to political analysts.

Shifting alliances is nothing new as far as Philippine politics is concerned, said Maria Ela L. Atienza, who teaches political science at the University of the Philippines (UP).

“Some of these organizations and traditional politicians tend to flock to perceived stronger candidates,” she said in a Viber message. “They can easily flip-flop compared to more progressive and principled politicians and groups.”

Ikaw Muna Pilipinas, a political group formed in 2021 to push the presidential bid of Mr. Domagoso, this month shifted its support to Ms. Robredo, who it said has a better chance of winning against the son and namesake of the late dictator Ferdinand E. Marcos.

This comes after a key official of Aksyon Demokratiko, Mr. Domagoso’s political party, left his post to endorse Ms. Robredo for president.

Partido Reporma, which is headed by a former administration ally and powerbroker in southern Philippines, withdrew its support for Senator Panfilo “Ping” M. Lacson and endorsed Ms. Robredo.

Meanwhile, One Cebu Party, a political group in central Philippines, has endorsed Mr. Marcos for president. The group is led by the family of Cebu Governor Gwendolyn F. Garcia, whose brother Pablo resigned as party secretary-general to continue supporting Mr. Domagoso.

Ms. Atienza noted that the Remulla political clan from vote-rich Cavite province had campaigned hard for the presidential run of ex-Vice President Jejomar C. Binay, only to shift its support at the last minute to Mr. Duterte, who was his rival then.

“What is possibly novel in the 2022 elections is that we have sectoral and professional groups that have not been very vocal in previous elections coming out to support the Robredo-Pangilinan tandem,” she said, referring to the tandem of Ms. Robredo and her running mate Senator Francis N. Pangilinan.

“In a presidential campaign, any form of endorsement is indispensable, and more so in a tight race,” said Jan Robert R. Go, an assistant political science professor at UP.

Local government officials usually endorse their national bets based on consultations with the governor and other higher-level politicians.

“So, if one candidate at the national level can penetrate this system, there is a chance of being considered and eventually being elected to the position,” Mr. Go said in a Facebook Messenger chat.

He added that national candidates have to balance their focus between national and local politics, which is more close-knit and could influence the results.

Ms. Atienza said the test on election day is whether the endorsements by traditional politicians would make a difference. “Will voters be influenced more by other factors? We can probably expect more shifts in the coming days until May 9. ”

‘SOLID NORTH’
Mr. Jean Encinas-Franco, a political science professor at UP, expects Mr. Marcos to lose supporters given that his ratings have been falling and issues against him and his family including billions of unpaid estate tax pile up.

“April is crunch time for all candidates so these developments are expected,” she said in a Messenger chat.

Ms. Franco said it’s unlikely for Ms. Robredo’s supporters to change their mind at the last minute since they have been organizing and joining rallies that have drawn thousands of people and have managed to run the campaign like a social movement.

Mr. Go said the opposition candidate must sustain her campaign and convince more voters given her relatively lower ratings.

“It seems that she’s gaining momentum because of a more personal way of campaigning,” he said. “If sustained, this can make a difference in her favor. A lot can still happen between today and election day. ”

Mr. Marcos kept his lead in Pulse Asia presidential opinion poll last month, with 56% of Filipinos saying they would vote for him, even if his rating fell by 4 points.

Earlier this month, the opposition bet drew more than 200,000 supporters at a rally in Pampanga province, the bailiwick of President Gloria Macapagal-Arroyo, who has endorsed Mr. Marcos and his vice-presidential running mate, Davao City Mayor and presidential daughter Sara Duterte-Carpio.

Analysts have said youth voters, who make up more than 50% of registered voters, are unlikely to be swayed by the endorsements of local politicians.

“I do not consider Pampanga a bailiwick of Arroyo or any of the politicians out there,” said Wenry Manaloto Basa, one of the thousands of youngsters who joined Ms. Robredo’s Pampanga rally.

“We are not going to let any local politician dictate who we should vote for,” he said in a Messenger chat. “We are tired of dynasties. We will vote for someone who we think will help not just our province and our Cabalens but all Filipinos. ”

“There is no Solid North,” supporters shouted at Ms. Robredo’s recent rally in La Union province in the country’s north, which is part of the regional bloc known for supporting the late dictator’s family.

“I joined the rally to prove that there is no Solid North,” Bret Jarod Sean Ordoño, one of the thousands of youngsters who joined the event, said in a Messenger chat. The 22-year-old student from UP joined the La Union rally with his friends from Baguio, Ilocos Sur and Ilocos Norte, which are considered part of the pro-Marcos regional bloc.

“The so-called unity dubbed as Solid North is a hoax,” he said, noting that his ancestors had fought to prevent the return of the Marcoses to power. “It is used to gain the bandwagon voters.”

Mr. Yadao, the laundry shop worker, said his voting decision is based on a candidate’s platforms and track record, not opinion polls. “Poll results can still change.”