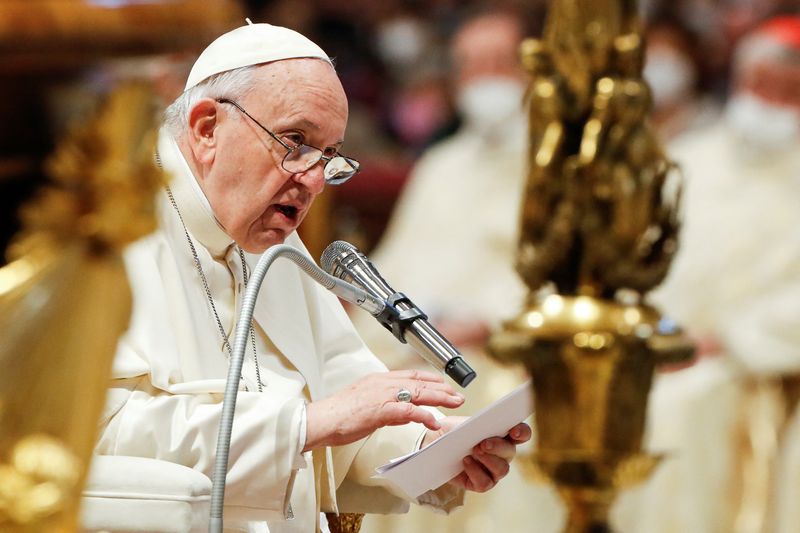 © Reuters. Pope Francis presides over a Holy Mass to mark the feast of Divine Mercy at the Vatican April 24, 2022. REUTERS / Remo Casilli

VATICAN CITY (Reuters) -Pope Francis called for halt to attacks in Ukraine on Sunday so aid can reach the exhausted population and urged leaders to “listen to the voice of the people”, who fear an escalation.

Speaking to tens of thousands of people in St. Peter’s Square, he noted that the day most Eastern Christians, including Orthodox and Catholics in Ukraine and Russia, celebrate Easter coincided with the two month mark of the war.

“Instead of stopping, the war has become more harsh,” he said from the window of the official papal study.

“I renew an appeal for an Easter truce, the minimum and tangible sign of a willingness for peace. Stop the attacks in order to help the exhausted population. Stop,” Francis said.

As Christians in Ukraine celebrated Orthodox Easter, there was no end in sight to a war that has killed thousands, uprooted millions more and reduced cities to rubble. Ukraine said two children were among those killed in shelling on Sunday.

“It is sad that in these days that are the most holy and solemn for all Christians, the deadly sound of weapons is heard more than sound of bells that announce the resurrection. And it is sad that weapons are increasingly taking the place of words, “Francis said.

“Please, political leaders, listen to the voice of the people who want peace, not an escalation of the conflict,” Francis said.

Francis, 85, has not specifically mentioned Russia or its president, Vladimir Putin, since the start of the conflict but he left little doubt which side he has criticized, using terms such as unjustified aggression and invasion and lamenting atrocities against civilians.

Putin, a member of the Russian Orthodox Church, has described Moscow’s actions as a “special military operation” in Ukraine aimed at demilitarizing and “denazifying” the country. Moscow has denied targeting civilians.

Francis has specifically rejected Russia’s terminology, calling it a war that has caused “rivers of blood”.

Earlier Francis again attended but did not preside at a Mass in St. Peter’s Basilica, the latest time over the Easter season that a flare up of pain in his knee forced him to curtail some activities. He read the homily in a clear and strong voice while seated.

2/2 © Reuters. Pope Francis presides over a Holy Mass to mark the feast of Divine Mercy at the Vatican April 24, 2022. REUTERS / Remo Casilli 2/2 By Philip Pullella VATICAN CITY (Reuters) -Pope Francis called for halt to attacks in Ukraine on Sunday so aid can reach the exhausted population and urged leaders…

Scaramucci’s crypto pivot comes with an eye on tripling assets