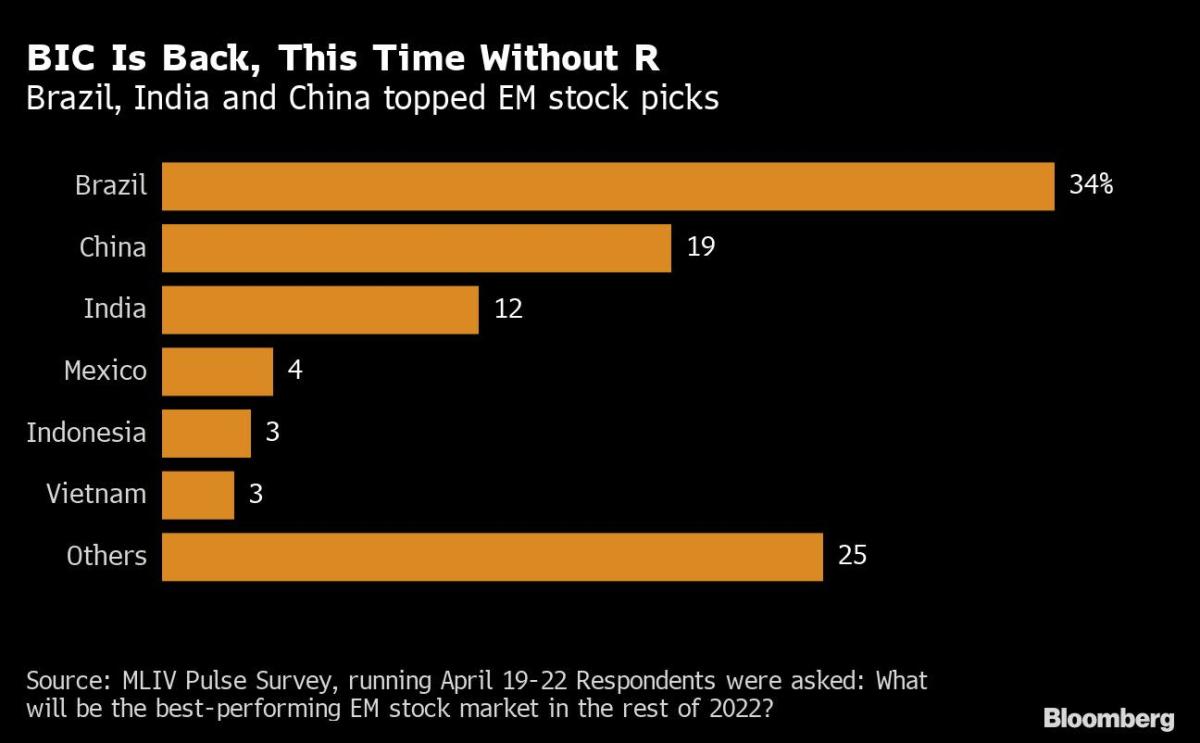 (Bloomberg) – Value investing is winning again, after famously lagging since the global financial crisis, as rising bond yields stifle technology stocks anew – while the lost decade for emerging markets is far from over.

That’s the big takeaway for Wall Street this year in the fifth weekly installment of the MLIV Pulse survey, which drew in 1,087 responses across the world from the likes of retail investors, portfolio managers and strategists.

A whopping 74% of MLIV readers say stocks that look cheap relative to valuation fundamentals are set to outperform their growth counterparts for the rest of 2022. Value has largely trailed since 2007 judging by S&P 500 indexes, fanning fears the strategy has become irrelevant in the modern tech-powered economy.

Not so, for MLIV Pulse respondents. A majority are backing the investing style in this wild stretch in global markets that’s seen cyclical sectors including energy and banks revive amid the great bond selloff and the commodity supercycle.

While respondents are rooting for a historic underdog in value, they remain firmly bearish on another: Stocks in the developing world. Thanks to rising political risk, anemic growth prospects and aggressive Federal Reserve policy tightening, these MLIV readers are gearing up for another forgettable year in the asset class.

The most popular playground for MLIV’s bulls is the S&P 500 Value index, garnering 40% of votes, followed by energy and bank stocks. Retail investors were the largest single category of survey respondents, making up 42%, followed by portfolio managers at 23%. Both buy-side and sell-side traders were, by far, the most bullish on growth. Senior management and sales swung the most heavily in favor of value equities.

The investing style has outperformed growth this year, but even famous proponents like Cliff Asness know it’s too early to declare vindication. And the strategy of going into cheap-looking stocks while dumping pricey counterparts will now face a big test. More than half of the S&P 500 Growth index, by weighting, will report earnings in coming days, including Apple Inc., Microsoft Corp. and Amazon.com Inc.

Strategists at BlackRock Inc. and UBS Group AG are among those also touting value sectors like financial services and commodities to outperform in 2020. Meanwhile, Marko Kolanovic at JPMorgan Chase & Co. suggests building a barbell portfolio of both growth and value stocks like metals and mining.

Growth has beaten value in the S&P 500 for much of the past 15 years. The game-changer in 2022 is the shift in the discount rate used to calculate the value of those future earnings. As yields have gone up, future growth has become less desirable relative to current earnings.

The ratio of value to growth is highly correlated to 10-year yields, and also 30-year securities. That means that as longer-dated rates have risen, growth stocks have lagged.

That’s even as the asset class looks relatively cheap. The blended 12-month forward price / earnings ratio on MSCI’s emerging markets index is far below its five-year average, whereas the same gauge for developed-market stocks is almost in line.

A bet on the MSCI Emerging Markets Index, which no longer includes Russia, is a wager on China – accounting for 31%. Yet economists tracked by Bloomberg have cut their forecasts for the nation’s growth to 5% for this year, which would be the slowest expansion since 1990, barring the 2020 pandemic. And the intensifying Shanghai lockdown and rising commodity prices could lower those forecasts further still.

All told, a plurality of 594 respondents expressed a clear preference for Brazil, while Russia got 1.9% of the vote.