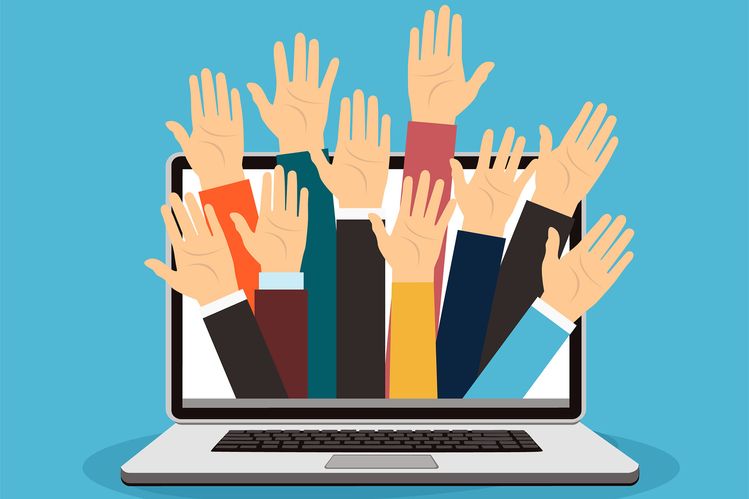 Companies are set for a “snowball” of voting activity this AGM season, as new platforms look to break down traditional barriers between shareholders and companies.

After online trading turned into a frenzy over the pandemic, with novice investors wading into the markets in search of returns, newcomers are now taking a deeper interest in shareholder activism.

Historically, a “hard core” of investors owning companies for long periods show up to AGMs year after year, according to Lee Wild, head of equity strategy at UK investment platform Interactive Investor.

“They’ve always visited the AGM, and it’s the cliché of the cup of tea and a biscuit and a sandwich and you get to have a chat with the chairman and top brass,” he said.

But that is changing. Smaller investors who prioritize environmental, social, and governance credentials are keen on making a difference, and are increasingly taking up opportunities to vote.

They do not care about the tea and biscuit treatment.

“We want to try and shift away from that. The cup of tea and biscuit is fine, but it’s more about customers holding companies to account, ”Wild told Financial News.

In November 2021, Interactive Investor decided to automatically allow all customers to vote in shareholder meetings. Since then, if a customer does not want to participate, they would have to opt out, rather than opt in, as was the case previously.

Less than half a percent of retail investors on the platform have so far opted out.

Interactive Investor found that the number of votes processed in 2021 increased by 110% compared to the previous year. Data published by the platform in April found that Abrdn, Easyjet and BHP Group were among the top 10 company meetings ranked by percentage of enrolled customers voting.

He expects the new breed of shareholders to have a major impact, as those who aren’t voting at the moment “see what can be done when people group together and actually go to shareholder meetings, physically or online”.

“I think it’s going to snowball over the next few years,” he said.

A spokesperson for Hargreaves Lansdown, another UK investment platform, said that clients are also automatically eligible to use its voting service.

“Typically, only around half a percent of clients exercise their right to vote at company AGMs, but with an ever-increasing focus on the part that retail investors can play, it will be interesting to see how this develops and whether behaviors shift,” the spokesperson said.

“The idea of ​​holding companies more accountable through your savings has become massively democratized over the past five years,” said Tom Powdrill, head of stewardship at PIRC. He also notes that there has been a “shift” regarding ESG topics and activism, with more people being interested in the impact that a company can have on society.

The trend is unlikely to slow down, with institutional investors also facing pressure to be more transparent.

On April 13, Fidelity International and fintech Tumelo launched a “stewardship hub”, which aims to provide “greater visibility of fund managers’ stewardship decisions” for pension clients, trustees and their advisers.

Leading investment platforms aren’t the only ones to have made changes – fund services provider Link Group announced last month that it was launching a new mobile app to “simplify how shareholders engage with the companies they invest in”.

The app, LinkVote +, will also “ease the process by which [the shareholder’s] voice can be heard ”, the company’s statement said.

“Disruption caused by the pandemic has in many ways challenged the relationship between boards and their shareholders as they’ve had to navigate to a more hybrid format,” said Ian Stokes, managing director of corporate markets for Emea at Link Group, in a 31 March statement.

“While UK corporations are held more accountable by their investors, overall participation and engagement levels are at risk of falling by the wayside.”

“This is part of a broader trend,” Richard Stone, chief executive of the Association of Investment Companies, told UN. “Retail investment platforms and the emergence of those in recent years have made it a lot easier for private individuals to buy shares and invest in companies on their own account.”

Virtual or hybrid AGMs, made more common through the pandemic’s lockdowns, mean it is easier for retail investors to participate: “There’s no reason why, sitting in their front room, a retail investor can not engage with management,” Stone added.

Technology could also help companies understand how widely certain views are shared and calculate how much weight to give to a particular issue, Stone said. “There’s a potential risk for vocal minorities to carry more sway, to give the impression that their view is general,” he said.

Lumi, a US-based startup that created a digital platform for AGMs, published research that found that retail shareholder engagement is booming, mostly due to increased interest in ESG issues.

Tulipshare, a London-based investing platform that allows retail investors to pool shares in order to meet the threshold to submit resolutions for shareholder votes at AGMs, brings these two pandemic-inspired trends together: an increased interest in sustainable finance and the rise of retail investors.

Founded in 2020 and launched in 2021, the platform has six campaigns ongoing on various ESG issues, including against JPMorgan and Apple.

Increased engagement can also come challenges for the companies that will have to face up to the renewed voting power.

“It could become a bit of a nightmare,” said Patrick Ghali, co-founder of Sussex Partners, a hedge fund advisory firm. “With activist investors, they have one single issue they want to address … they put a lot of effort and volume into that. How do you deal with the cacophony of hundreds of different ideas? ”

For Stone, engagement with shareholders should not be isolated to the once-a-year occurrence of an AGM. Companies “should have a program that runs throughout the year, giving shareholders updates, potentially having calls with management”.

“An AGM forms part of the opportunities, not the [only] one, ”he added.

To contact the author of this story with feedback or news, email Bérengère Sim