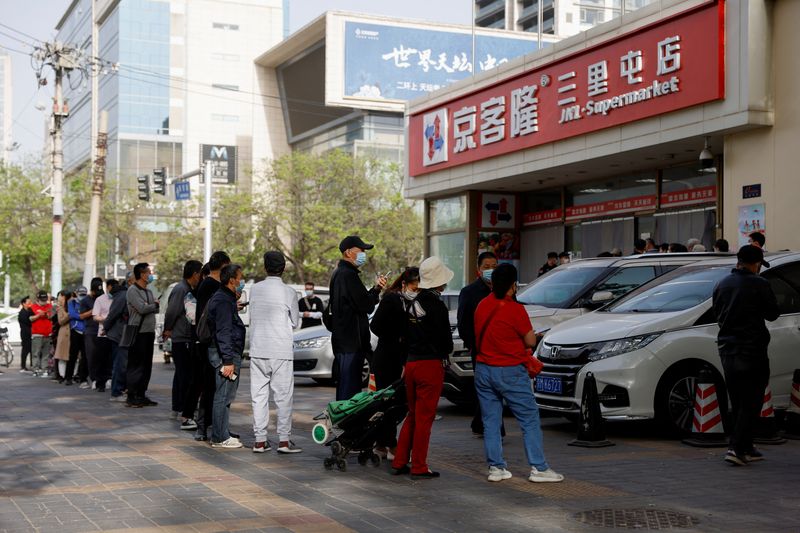 BEIJING (Reuters) -Residents across Beijing joined growing lines of people waiting to be screened for COVID-19 on Tuesday after the Chinese capital overnight ramped up plans for mass-testing to 20 million people and fueled worries about a looming lockdown.

Amid comparisons with Shanghai, where more than 1,000 cases were reported in March before widespread curbs were finally imposed on 26 million people, many in Beijing flocked to supermarkets to stock up on food and supplies fearing sudden localized lockdowns.

Authorities on Tuesday started to close some gyms, theaters and tourist sites, the day after Beijing began testing the residents of its most populous district, Chaoyang. By end-Monday, Beijing announced it would conduct tests on 10 other districts and one economic development zone by Saturday.

The Chinese capital reported 33 new locally transmitted cases for April 25, the city’s health authority said on Tuesday, of which 32 were symptomatic and one was asymptomatic. That was slightly higher than 19 community infections reported a day earlier.

Beijing’s decision to test most of its total population of 22 million days after detecting a small number of infections contrasts with Shanghai, which waited for about a month after its outbreak began before moving to city-wide mass testing in early April.

Three rounds of PCR tests will be conducted from Tuesday to Saturday in districts including Haidian, where Liu Wentao, a cook leaving his dorm to get tested, told Reuters he was concerned at how fast the virus was spreading though confident Beijing could avoid locking down like Shanghai.

“Beijing is the capital, the virus controls are stronger than in other places, I do not think it will be like Shanghai, where it suddenly increases to thousands of cases,” Liu said.

While Beijing’s latest COVID outbreak is modest by global standards, a Shanghai-style lockdown of Chinese capital would further cloud the country’s economic outlook.

Shanghai’s economy slowed in the first quarter, hurt by rare declines in industrial output and local consumption due to the city’s COVID outbreak. In March alone, retail sales nosedived by 18.9%.

“Clearly, Shanghai has taught one lesson, which is if you go down this line of total lockdowns, not only is it incredibly expensive, but also it’s economically destructive and it stresses out the social fiber,” Joerg Wuttke, president of the European Union Chamber of Commerce, told Reuters.

Asian markets suffered their worst day in over a month on Monday on fears that Beijing was about to enter such a lockdown. Chinese shares slumped to a two-year low.