Could key ingredients for life have arrived from space? Scientists say yes By Reuters 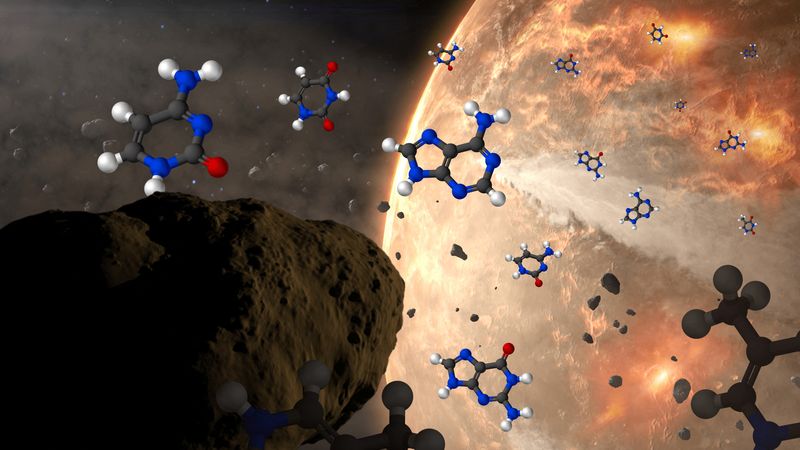 WASHINGTON (Reuters) – A fresh examination of meteorites that landed in the United States, Canada and Australia is bolstering the notion that such objects may have delivered to Earth early in its history chemical ingredients vital for the advent of life.

Scientists previously had detected on these meteorites three of the five chemical components needed to form DNA, the molecule that carries genetic instructions in living organisms, and RNA, the molecule crucial for controlling the actions of genes. Researchers said on Tuesday they have now identified the final two after fine-tuning the way they analyzed the meteorites.

Unlike in previous work, the methods used this time were more sensitive and did not use strong acids or hot liquid to extract the five components, known as nucleobases, according to astrochemist Yasuhiro Oba of Hokkaido University’s Institute of Low Temperature Science in Japan, lead author of the study published in the journal Nature Communications.

Confirmation of an extraterrestrial origin of a complete set of nucleobases found in DNA and RNA buttresses the theory that meteorites could have been an important source of organic compounds necessary for the emergence of Earth’s first living organisms, according to astrobiologist and study co-author Danny Glavin or NASA’s Goddard Space Flight Center in Maryland.

Scientists have been seeking to better understand the events that unfolded on Earth that enabled various chemical compounds to come together in a warm watery setting to form a living microbe able to reproduce itself. The formation of DNA and RNA would be an important milestone as these molecules essentially contain the instructions to build and operate living organisms.

“There is still much to learn about the chemical steps that led to the origin of life on Earth – the first self-replicating system,” Glavin said. “This research certainly adds to the list of chemical compounds that would have been present in the early Earth’s prebiotic (existing before the emergence of life) soup.”

All three are classified as carbonaceous chondrites, made of rocky material thought to have formed early in the solar system’s history. They are carbon-rich, with the Murchison and Murray meteorites containing about 2% organic carbon by weight and the Tagish Lake meteorite containing about 4% organic carbon. Carbon is a primary constituent of organisms on Earth.

“All three meteorites contain a very complex mixture of organic molecules, most of which have not yet been identified,” Glavin said.

Earth formed roughly 4.5 billion years ago. In its infancy, it was pelted by meteorites, comets and other material from space. The planet’s first organisms were primitive microbes in the primordial seas, and the earliest-known fossils are marine microbial specimens dating to roughly 3.5 billion years ago, though there are hints of life in older fossils.

The two nucleobases, called cytosine and thymine, newly identified in the meteorites may have eluded detection in previous examinations because they possess a more delicate structure than the other three, the researchers said.

“The present results may not directly elucidate the origin of life on Earth,” Oba said, “but I believe that they can improve our understanding of the inventory of organic molecules on the early Earth before the onset of life.”

© Reuters. Conceptual image of meteoroids delivering nucleobases – nitrogen-containing compounds crucial in forming DNAs double-helix structure – to ancient Earth. The nucleobases are represented by structural diagrams with hydrogen atoms as white spheres, carbon a By Will Dunham WASHINGTON (Reuters) – A fresh examination of meteorites that landed in the United States, Canada and…